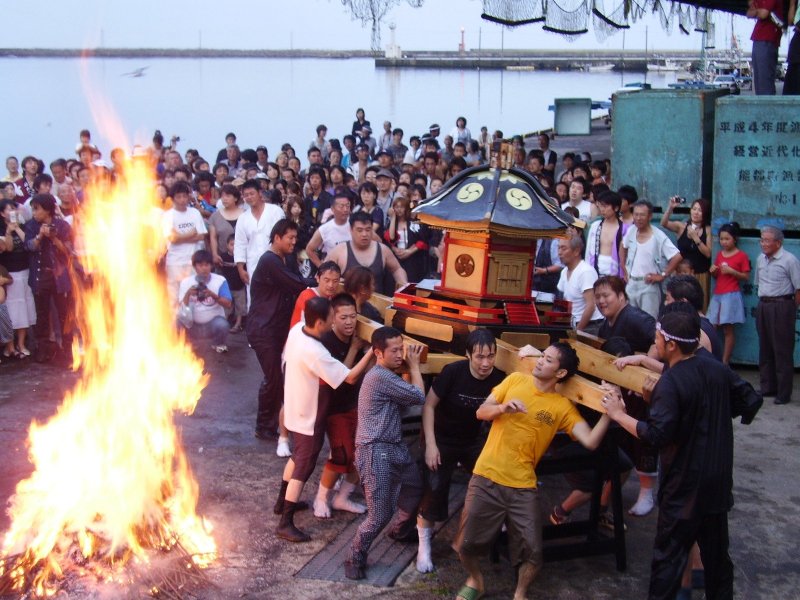 Abare Matsuri, or Rampage Festival, is an annual event in the town of Noto, Ishikawa. One of Japan’s most violent and fiery festivals, the Abare Matsuri is a 2-day event that ends with a Mikoshi shrine being ceremoniously destroyed and burnt. It is also commonly referred to as the "Fire & Violence" Festival.

This strangely violent festival first began 350 years ago, when a plague spread in the town of Noto, Ishikawa. The locals called in the help of Gozu Tenno from Kyoto’s Gion Shrine to pray for the plague to end. A festival was held to ward off the epidemic, afterwards, a bee stung the sick people who were cured as a result. The bee was thought to be the messenger of the gods, and the locals paraded a large kiriko float to celebrate the end of the plague. This bizarre series of events is believed to be the origin of the Abare Matsuri. Now, the Noto town residents hold the annual "Fire & Violence Festival" to give thanks and entertain the deity.

The Abare Matsuri is held on every 1st Friday and Saturday of July. The chaotic 2-day event begins at Yasaka Shrine in Ushitsu, Noto. After a Shinto ceremony is held at the shrine, the Mikoshi are paraded around town along with more than 40 kiriko. A Mikoshi is a portable shrine, much like a palanquin. Kiriko are decorated lanterns mounted onto large wooden structures. As the night sky descends, five 7-metre tall wooden torches are set aflame, lighting up the dark streets of Noto. The boisterous parade is accompanied by the sounds of taiko drums and excited festival attendees.

On the 2nd day of the event is when it truly becomes a rampage. The Mikoshi is brutally destroyed, first by being thrown onto the ground, then into the river, and lastly into the bonfire to be completely decimated. The 12 barely clothed men carrying the Mikoshi excitedly shout as they destroy the shrine while fighting the elements of both water and fire. The scene of this destruction perfectly captures the essence of the "Fire & Violence" Festival. Shinto priests from Yasaka Shrine inspect the battered remains of the Mikoshi to determine if it has been “properly” destroyed, then take it back into the shrine.

The festival starts at Yasaka Shrine and continues within the entire Ushitsu area. Head down to the Noto peninsula in July to witness this incredible event.

Find out more about the Top 10 Weird Events in Japan.

Yasaka Shrine is a 30-minute drive from Noto Toll Road Konogi I.C.
Renting a car is recommended as public transportation in Noto is limited.