Fragments of a golden age

Chuson-ji boasts the few fragments of ancient Hiraizumi which survived the fall of the Fujiwara; it’s not the only thing to see in Hiraizumi, but it’s certainly the highlight of the trip.

Along the straightforward 15 minute cycle ride from Hiraizumi Station, you’ll see a swampy patch of ground which used to be Muryoko-in, a replica of Kyoto’s Byodo-in (“Phoenix Hall”), which ironically was never rebuilt after burning down. Today, only an earthen wall survives to attest to it ever existing.

The landscape of Chuson-ji, sitting atop a steep but not grueling hill, is particularly lovely. Tall cedar trees lend a hushed quiet. Though the views along the walk are expansive, the landscape is not especially breathtaking and is snaked by roads and rail.

Lavishly decorated in gold leaf and mother of pearl, the Konjiki-do (“Golden Hall”) aims to depict Amidha Buddha in the Pure Land heaven this sect of Buddhism venerates. Once open to the elements, today it is protected within a parent building and a layer of thick glass.

An unusual practice in ancient Japan, it contains the mummified (though not visible) remains of several Fujiwara clan heads and one literal head, sans body – the result of interesting times rather than a space saving measure.

It goes without saying that it absolutely has to be seen – though much like Kinkaku-ji in Kyoto, it is literally coated with gold and a little more bling than is typical for Japanese architecture.

Though only the pavilion survives from the area’s golden age, you’ll find a mix of shrines and a stage for Noh performances, all set upon the wooded hilltop. Adult admission fees to the area’s highlights will set you back 800 Yen– a little steeper than many places but well worth it.

Included in this price (and possibly worth the admission price alone) is a museum holding an array of numbingly ancient and beautiful artifacts. Highlights are stunning Lotus Sutra calligraphy and a series of large, 800-year-old wooden Buddhas.

Any problems with Chuson-ji (aside the humidity in season) relate to Hiraizumi’s recent inscription as a UNESCO World Heritage Site. It’s not hard to tell what a wonderfully peaceful place it should be – but it really isn’t.

I went on an off-season Friday afternoon, but even so there were numerous guided tours filled with people shouting over each other.

Expect bustling crowds during cherry blossom season or towards the end of October, when the autumnal colours are at their best. If you’re fresh out of Tokyo, you probably won’t notice or care about the crowds and noise.

Disabled access may be problematic, given the steep initial hill, but I did note an impossibly old woman in a wheelchair starring in a family photograph outside the Konjiki-do...Looking at her, I wondered if she had helped build it. 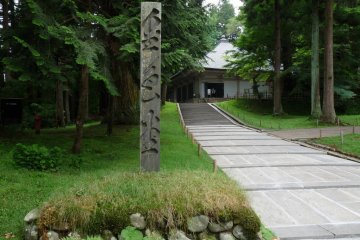 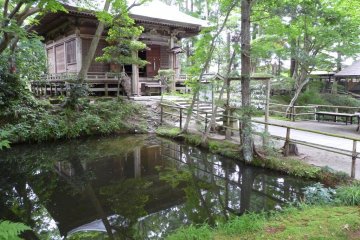 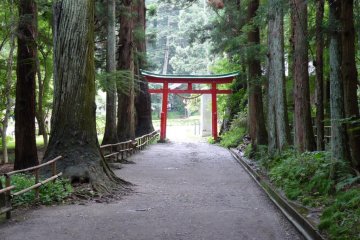