The name of the restaurant actually means “My Hoof” and the cute logo mark is a cow drawn in one line. It is this logo mark and the name written in Hiragana on a small plate that shows you the entrance to the restaurant.

The chef, Mr. Mikio Sugata, welcomes us with a cup of barley tea. This is not just any barley but ‘craft barley’ that he produced himself on his farm. Actually, the farm used to be his father’s and before that his grand-father’s dairy farm but recently he took over the business and he now raises cows and goats.

We ordered the pasta set for lunch. At yen 2,000 for a starter, soup, main dish and dessert this lunch set is within the normal lunch menu price range, yet what you get is so much more in terms of quality and presentation.

The starter consists of boiled vegetable and gnocchi on a bed of garlic miso paste. Needless to say, the vegetables were harvested on the chef’s farm in the morning before cooking them for us for lunch. Today we have parsnip, cauliflower and mushrooms. On top is a thin slice or grilled eggplant. The gnocchi are made from soba flour. The garlic miso has been prepared according to a secret recipe from his grand-mother.

Mr. Sugata grows all the vegetables that he uses for his cooking himself, and he grows them organically. If he had more time, he would invite customers to pick the vegetables with him, he says. But time is in short supply, since he is not only the farmer but also the chef, and hence has to make preparations in the restaurant before opening for lunch or dinner.

This is followed by a rich duck broth that contains a piece of tasty duck meat and chunks of burdock, broccoli, Chinese cabbage, leek and kotake, a local mushroom, as well as ravioli.

The main course consists of pasta with a curry flavored sauce. The chef points out that this is a ‘milk pasta’ because it leaves a faint taste of milk on your tongue. This is the connection to the family dairy farm and his memories of flavorful milk that he grew up with.

The dessert are a small cone each of home-made sherbet made from mandarins and grapes, plus a loaf of Ganzuki, a brown sugar-steamed sponge bread that is a local sweet of Iwate Prefecture. Ganzuki means “goose moon”.

All dishes are tastefully arranged in custom-made pottery made in Iwate. Each plate and each cup is unique. They are made from sand harvested from the ocean and clay from the mountains.

The tea cups are said to be birch-themed because their surface looks like the white and black patterned trunk of a birch. The tea pot is of course a Morioka-made iron pot.

This restaurant is a one-man show as Mr. Sugata both cooks and serves the food. He explains each dish and the ingredients in great detail and he is proud of his organic offering. The restaurant can cater to all dietary needs; dishes can be based on meat, fish or vegetables.

The restaurant is a short walk away from Tono Station on Chuo Street. If you continue along this street, you will get to the Tono City Museum located at the base of a small hill that hosts the remains of Nabekura Castle, now Nabekura Park and Observatory, and the Nanbu Shrine, which are both reminders of Tono’s Feudal past.

His restaurant is quite small. It has only two tables and a couple of counter seats. It is open for lunch from noon to 2pm and for dinner from 6pm to 9pm every day except on Monday. 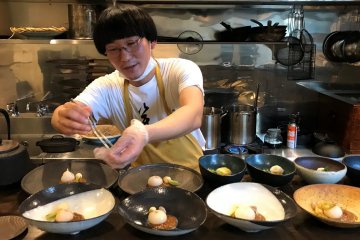 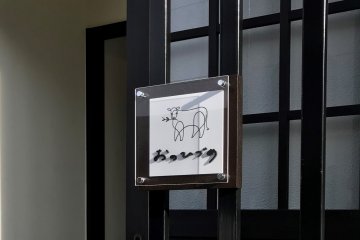 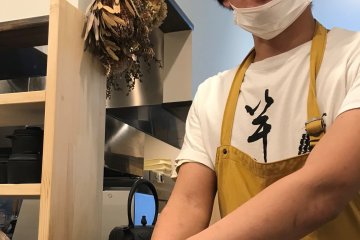 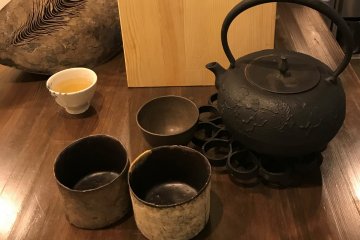 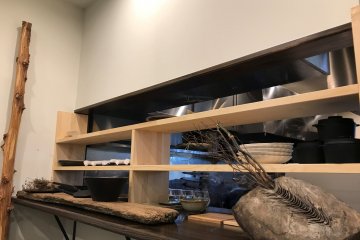 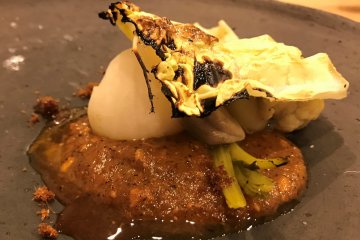 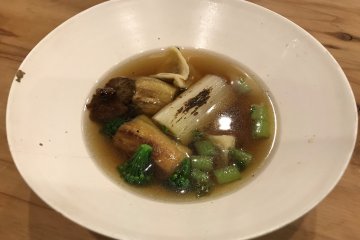 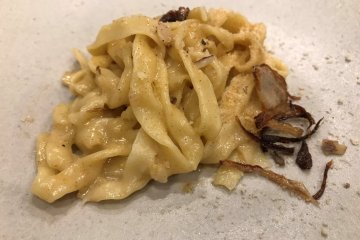 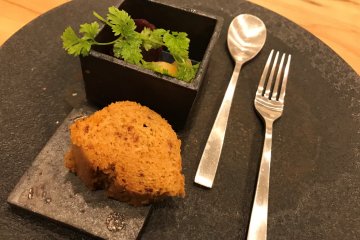