In the north east of Iwate Prefecture, there is traditional pottery industry that still retains its original designs and manufacturing method. Beginning in the 18th century, Kokujiyaki pottery originates from Kuji, Iwate Prefecture, in the north of Honshu Island. Kokujiyaki was founded by Jin-eimon Kumagai in the late Edo period (1600-1867). After studying in the largest center of Japanese pottery making, at that time located in east Japan, he set up his own workshop in his hometown of Kuji.

Jin-eimon Kumagai realized that certain clay deposits found in Kuji are well suited to pottery manufacturing. Kuji clay, still excavated in a traditional way, has many special characteristics. When fired directly, its color changes to white in appearance. Firing with a white glaze gives the pottery its quintessential finish. Kuji clay contains little iron, so is well suited to pottery manufacturing, as iron results in discoloration of the clay when fired.

The Kokujiyaki gallery and workshop are located on the same site. Traditional methods are still used to manufacture the pottery. Clay is extracted from the source, separated from sand and other impurities, and finally molded into a block that can be used directly in pottery making. The gallery and workshops are located on the slope of a mountain which feels cold, even in summer. With the onset of winter and snowfall, measures must be taken to prevent the processed clay blocks from freezing. Throughout the warmer seasons, the clay blocks are wrapped in plastic to retain moisture however, an electric blanket is also placed over in blocks in winter.

Potters and visitors to the workshop are able to make pottery by working it through the hands on a potter's wheel. The finished pottery is allowed to dry naturally, and various glazes are applied depending on the desired appearance, before final firing inside of a gas kiln. As well as observing the Kokujiyaki manufacturing process in the workshop, visitors are also invited to see the traditional 'noborigama', or 'climbing kiln'. After lighting a fire at the base, the heat 'climbs' upwards to heat each successive kiln. More than a day is required for the kiln to reach is optimal temperature of 1200 degrees centrigade. Mortar is not used in between the bricks in order to allow for free expansion and contraction under intense heat. Fresh clay adhered to small test tiles is used to confirm that each oven of the noborigama has reached the correct temperature. Gas kilns are now used in place of the noborigama.

The process of making the pottery from start to finish takes a long time; at least two months. Typical forms of Kokujiyaki pottery included jars, vases, cups, bowls, plates, and other decorative items, each bearing the traditional seal. Kokujiyaki has gained fame since the Edo period for its bowls and jars. Even back in the 19th century, Muneyoshi Yanagi, the founder of the Mingei folk art movement praised the beauty of Kokujiyaki.

Besides watching and participating in the captivating process of making Kokujiyaki pottery, visitors can enjoy the beauty of works dating from the Edo period to the present in the on-site display cases. The unique color and style of Kokujiyaki retains its charm to the present day. Visitors are always welcome to the workshop and can arrange for a pottery making experience through advance booking. 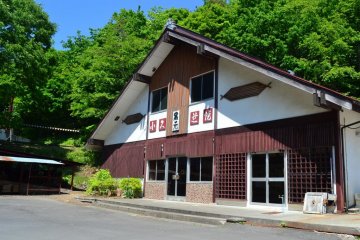 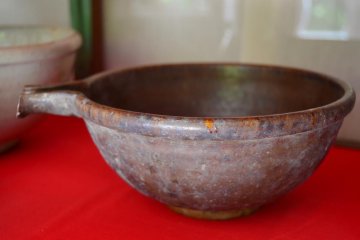 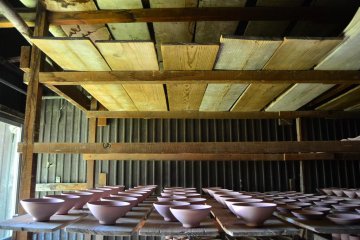