Cycle the Length of Japan for Sustainability

After more than two months sleeping in tents, waking up to Ojisan (old dude) inquisitions, eating oatmeal over camp stove with chopsticks (thanks Alishan Organics!), showering under faucets and faking that we are professional cyclists climbing peaks of 500, 1000, 1250m and more, into forests dense with fog, volcano calderas, valleys of pine and mikan (citrus fruit) trees, and finally hiking 21km to 1350m in the primeval old growth cedar forests of the mysterious mountain island of Yakushima south of Kyushuu to meet Jomon Sugi, Japan's oldest tree (estimated 3000-7200 years-old); we have completed what we set out to do-- ride bicycles the length of Japan!

Why do such a thing you might ask? For the environment, that's why!

For 15 years now, the BEE Ride has taken place (excepting 2011 after the Tohoku disasters), starting sometime in July or August and spanning about two months, the time it takes to cycle at fair pace the length of Japan from Hokkaido to Kyushuu, and sometimes Okinawa. Started by some retiring JET English teachers who wanted to go out with a bang, and raise some money and awareness for sustainable living practices, including clean transportation, re-use chopsticks, dishes, bottles and avoiding chain stores selling over-packaged goods when possible, the BEE Ride has in its history raised thousands of dollars for charities like Japan For Sustainability (www.japanfs.org).

Not only monetary though, the local impact, meeting people, visiting schools and giving presentations along the way, BEE interacts with thousands of people who can then envision for themselves more clearly a clean future that tends to the stressed cries of our precious planet Earth.

Trend-setting in Japan is important business. The effects of a bright idea can catch on like wildfire and pass swiftly from one end of the island nation to another. Thus, the work of setting examples in daily life and practicing what you proverbially preach is of the utmost importance. BEE riders come from various backgrounds all over the globe, lending their own international flare, yet contributing to a common good for the future of Japan and the entire planet.

In 2012, the small team of three decided on Jomon Sugi as our official endpoint, a striking symbol of the strength and wisdom that pristine nature exudes. And increasingly, as more hikers want to make the tough ten-hour trek to meet the ancient cedar, visit Mononoke Forest and generally be astounded by the mysterious scent of the mossy wonderland which inspired Anime legend Hayao Miyazaki, even as far out locations as Yakushima are in danger of human impact. More than candy wrappers though less visible on the path, are carbon footprints, straining the eco-balance and encouraging fiercer storms to bash the southern isles every year (22 typhoons to hit Okinawa just this year, now?)

Jomon Sugi stands tall, but for how long? As the soil erodes around its roots from heavy rains, it is only a matter of time before one of nature's greatest living relics becomes ancient history, too.

So, if you visit, and I absolutely encourage you to do so, remember your own personal impact. Plastic-packed Bento boxes, carbon emissions, even your Ryokan electricity bill. Consider all the by-products of your trip, and do your best to make it as sustainable as you can. Trust me, it makes the adventure ten times more fulfilling.

J Muzacz worked as an English teacher with JET for two years in northern Kyoto Prefecture by the Sea of Japan. There in 2012 he published a book titled JAPAN 365: A Drawing-A-Day Project, available from Amazon. He then quit his job and cycled the length of Japan with the BEE-Bicycle for Ev... 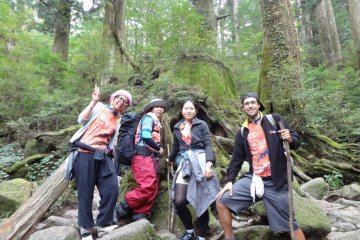 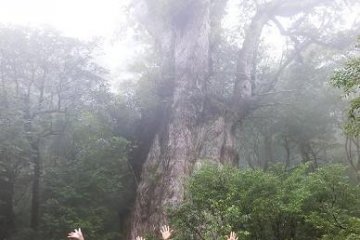 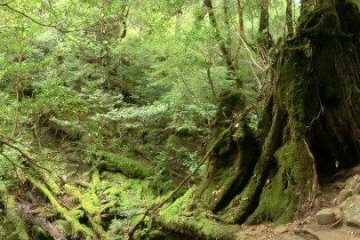