So, the reason people flock to Yakushima is Jomon Sugi, the oldest tree in Japan. However, I prefer Shiratani Unsuikyo. Apparently the forests in famous anime film Princess Mononoke are based on the forest here. The luscious green mossy boulders and carelessly wandering deer are enough to stimulate anyone's imagination.

The walks here are less taxing than Jomon Sugi. I spent around four hours compared to eight hours at Jomon, meaning you have more time to leisurely wander and take in the sights and sounds, rather than rushing to see one special tree. The paths are man-made stone paths near the entrance, but it doesn't take long for them to turn into boulder-covered rustic forest trails. Don't get me wrong, this isn't mountaineering or jungle trekking at its most extreme, but you don't have to travel far to feel like you are wandering in an enchanted, magical forest.

That said, after the previous day trekking for 8 hours in the forest, a couple of hours in I felt I was becoming desensitized to the beautiful environment. Little did I know the best was yet to come. If you come here, you have to walk to Taiko Iwa, which means something like big drum boulder.

The path becomes quite steep towards the boulder and I must admit, I was thinking 'is this really worth it?' Then you get to the top. All of a sudden out of nowhere, the path drops off onto the boulder. Before you realize you are standing on it, your breath is taken away by the simply magnificent panoramic view of the surrounding area.

It's one of those places I wish only I knew about. Somewhere I could secretly go and ponder life, my troubles or just sit and relax. You can certainly do this here, but it isn't a secret. It's not as busy as Jomon Sugi, but a fair few people make the trip here. I was on the trail by 6 in the morning and I think it was worth it.

On the way back, I was greeted by what seemed like a scene from Bambi. A deer enter from the left, nibbling away at something, sauntered between my friend and I and wandered off to the other side of the path and into the forest without a care in the World.

Other places in Japan, such as Miyajima have lots of deer, but it feels a bit unnatural, like the deer are begging for food, or attention. On Yakushima, it feels like you are glimpsing their natural habitat. They aren't afraid and go about their business freely, but this is due to a lack of predators on the island, not the chance of free food from tourists.

There is a point there, please don't feed the animals (obviously not in a Gremlins change into a monster kind of way) but it's important to maintain Yakushima's natural environment.

Throughout the forest there are various spots where you can grab a boulder and a rest, even a lie down. The trails should be quiet enough that you can have a bit of time to yourself if that's what you're looking for.

Also, if you're looking for somewhere to stay, Garappa to Kenkichi Minshuku was excellent. The rooms were basic, but the staff were friendly and knowledgeable. They also have 100 different shochu (Japanese alcohol) available to try.

Find out more about Shiratani Unsuikyo. 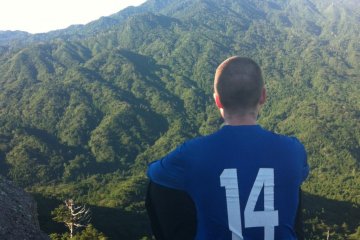 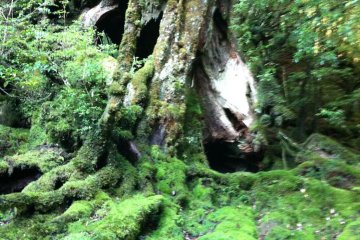 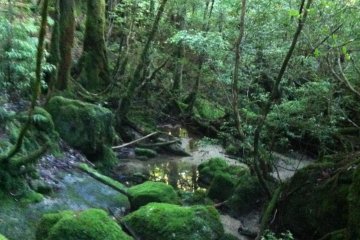 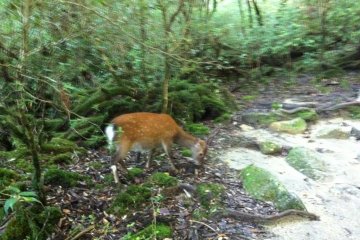 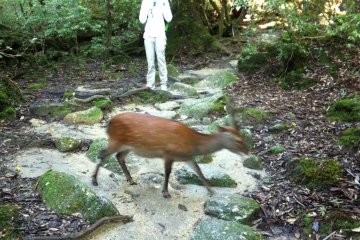 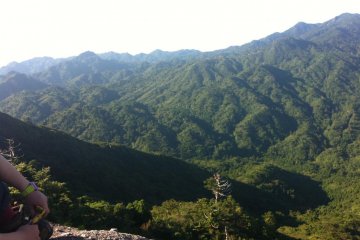 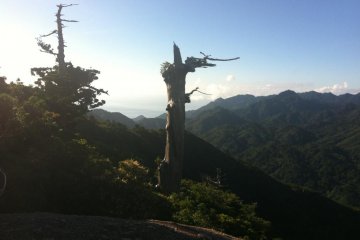