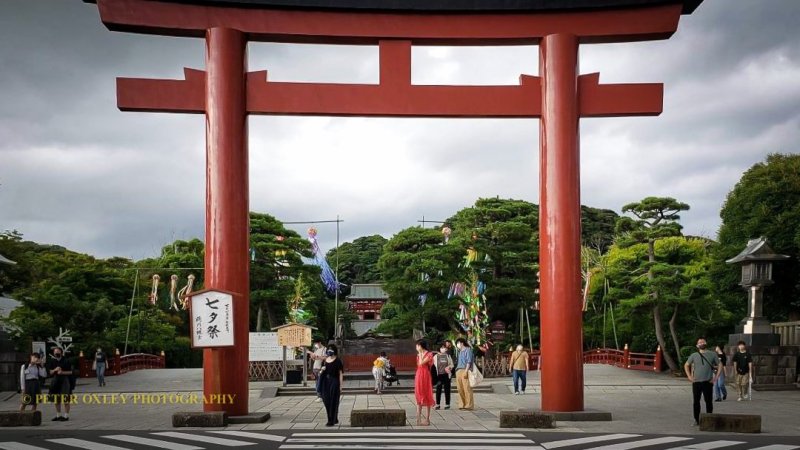 San-no-torii gate with the shrine in the background (Photo: Peter Oxley)

San-no-torii gate with the shrine in the background 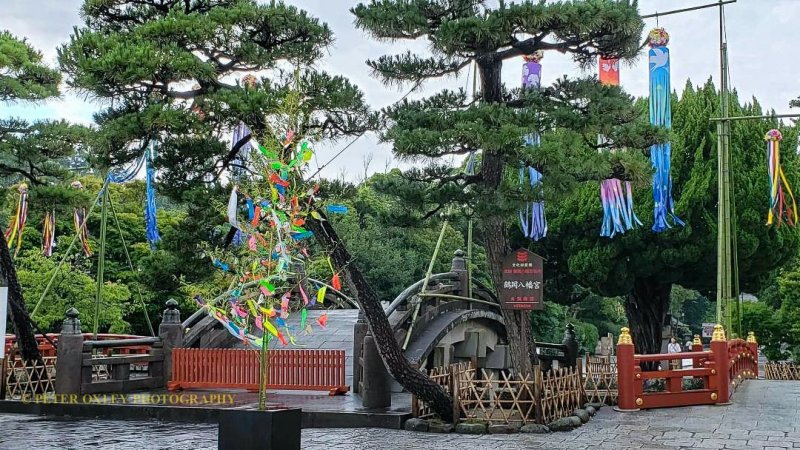 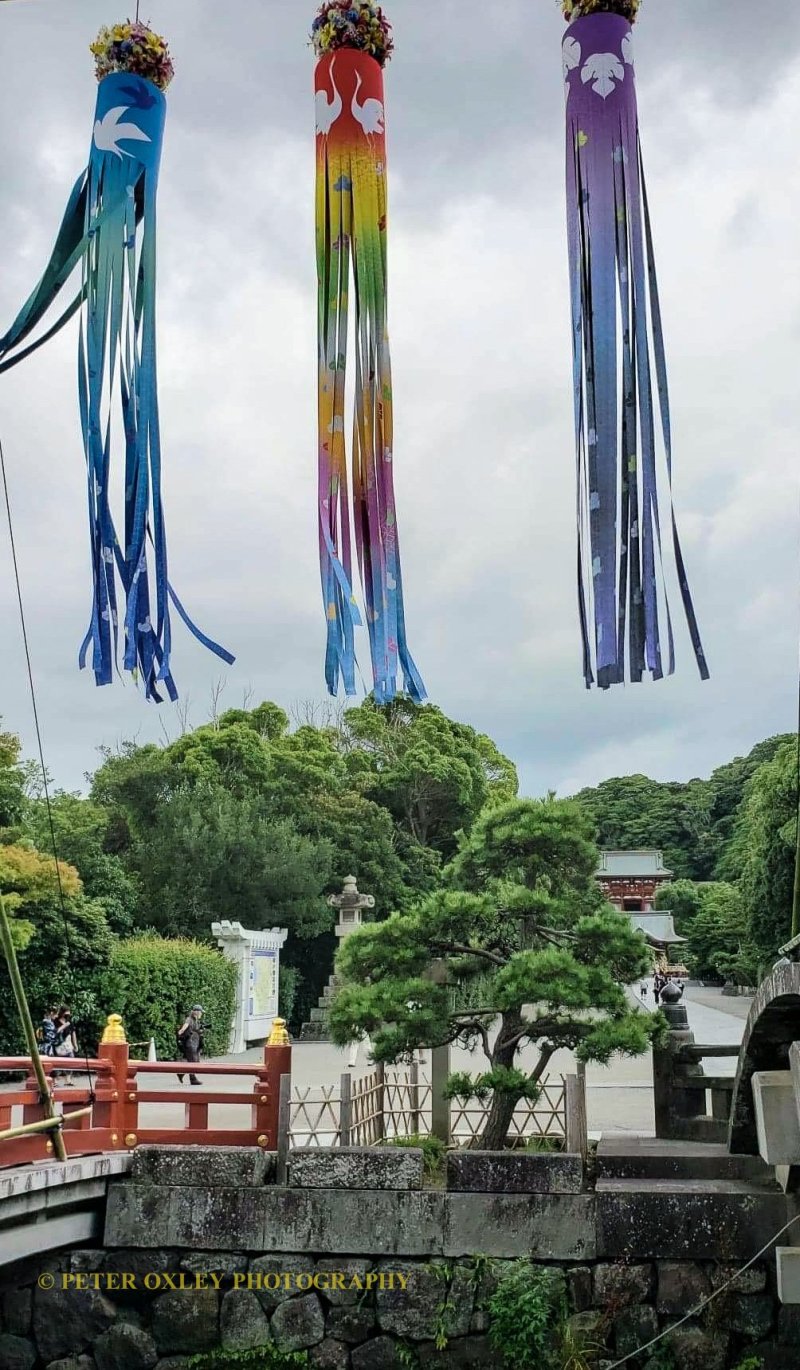 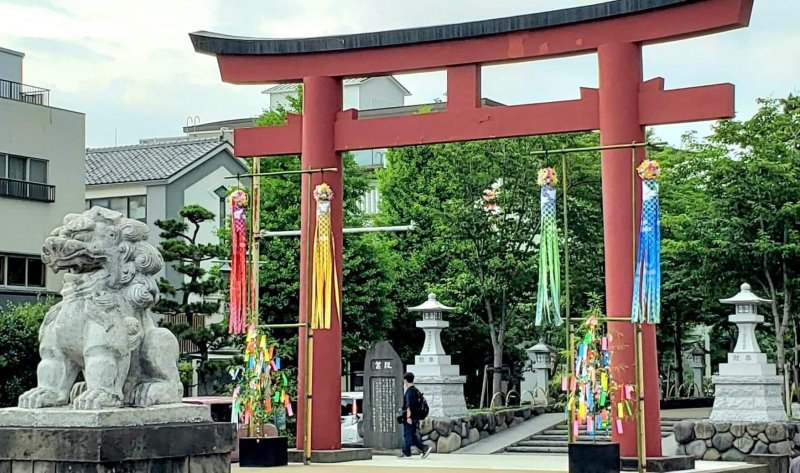 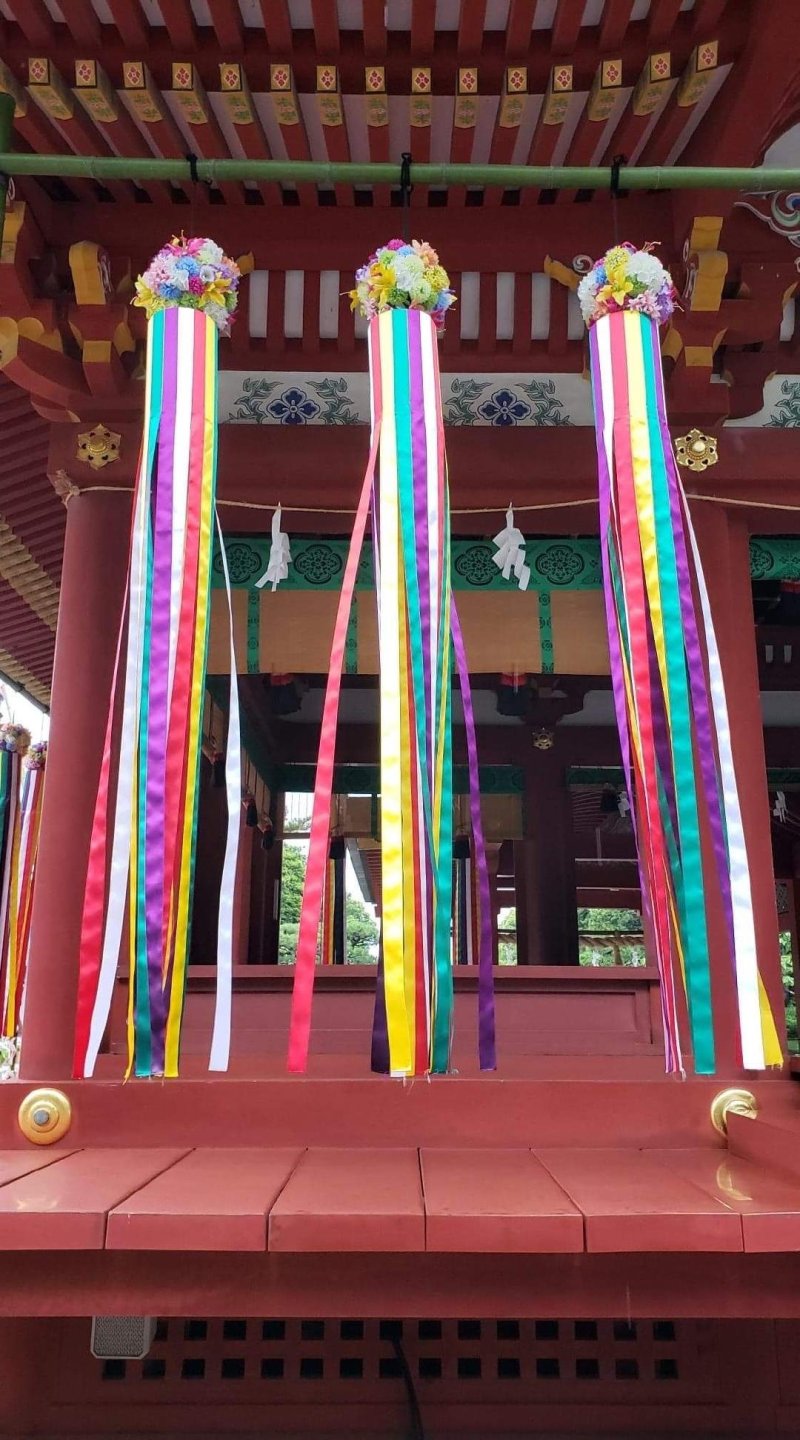 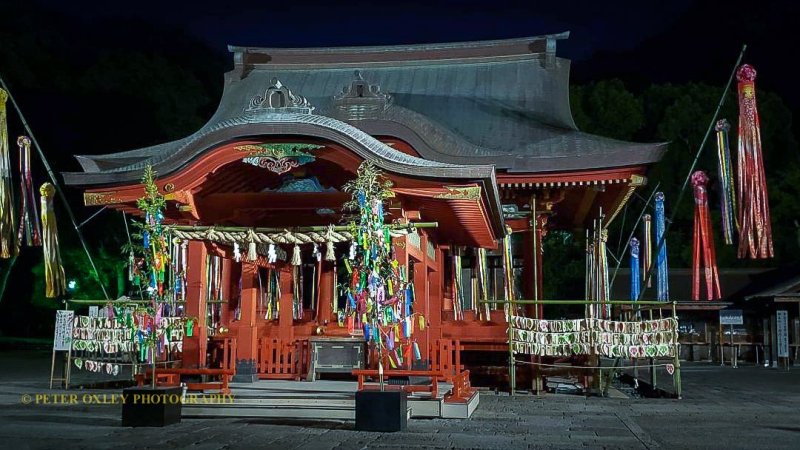 The Maiden with tanzaku on bamboo branches 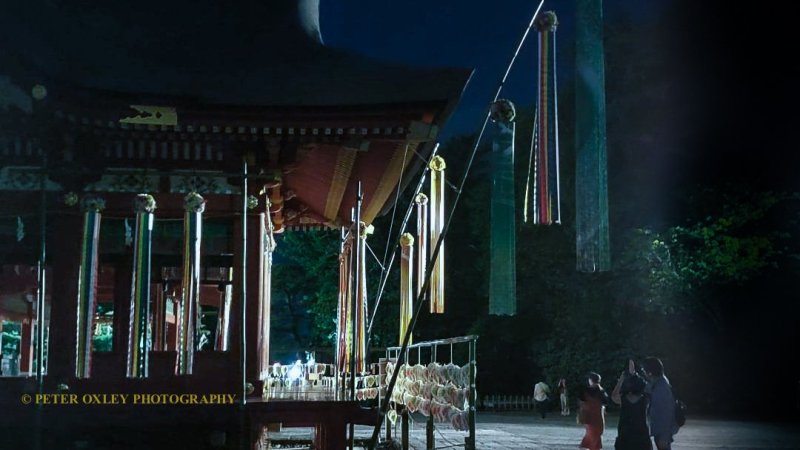 The Maiden at night 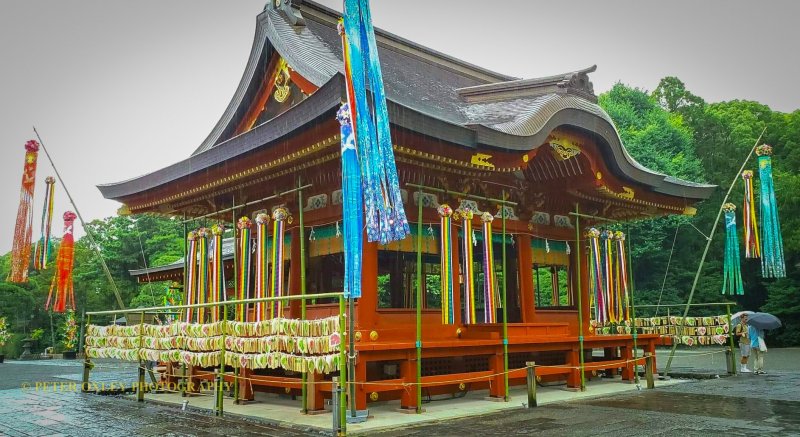 The Maiden by day 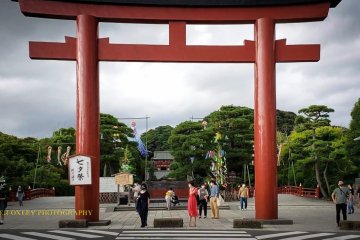 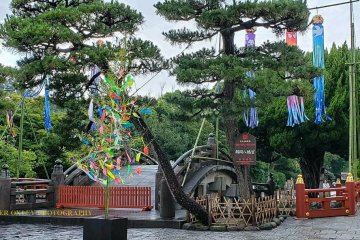 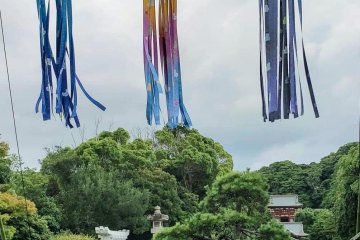 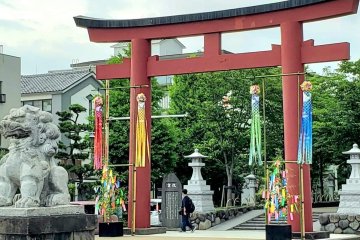 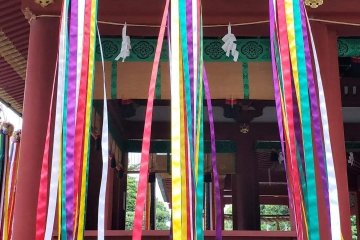 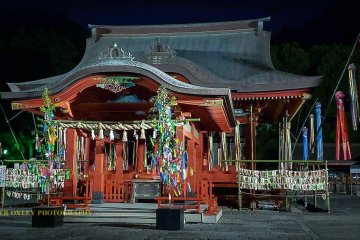 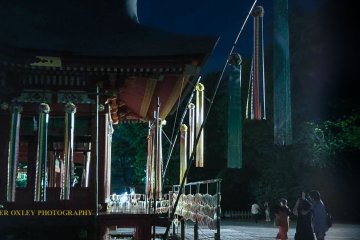 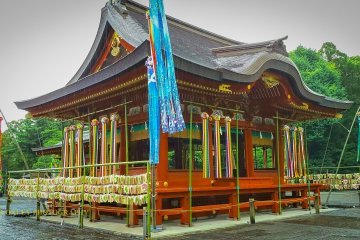 A Festival Based on an Ancient Romantic Folk Tale

Tanabata, also known as Star Festival, is a Japanese event, originally from China (Qixi Festival), based on an old folk tale, The Cowherd and the Weaver Girl. The festival takes place in shrines, temples, and shopping streets (shotengai) across the country, sometimes in July and sometimes in August. It celebrates the meeting of deities Orihime and Hikoboshi, represented by the stars Vega and Altair, as they cross the Milky Way on their journey to reunite once every year.

The most famous and well known of the Tanabata festivals is held in Sendai City, Miyagi Prefecture, from August 6 to 8, while in Kanto, two of the most prominent venues are Hiratsuka in Kanagawa Prefecture and Asagaya in Tokyo. Children look forward to this special day as a sign that summer has arrived. Celebrations also take place at Tsurugaoka Hachimangu Shrine in Kamakura City, though the festivities are relatively small.

Tanabata was introduced to Japan by Empress Koken in 755, initially as an occasion for the imperial court and aristocrats to stargaze, write and exchange poetry, and engage in friendly contests.

Today, people celebrate Tanabata by writing their wishes, mostly related to the heart, on small strips of paper (tanzaku) and hanging them on bamboo branches in the hope that the wishes will come true. Other decorations include origami pieces, heart-shaped ema plaques, and colorful streamers representing the stars as they make their way across the night sky. According to legend, every July 7, the stars Vega and Altair, representing Orihime and Hikoboshi, traverse the Milky Way to renew their eternal vow of love.

How did this legend come about? There are several versions, but the one I like best is the following:

A Story of Star-crossed Lovers

There once was a weaver, a princess called Orihime (Vega), the daughter of the Sky King, Tentei, who loved to weave down by the river. So beautiful was the cloth she wove that her father encouraged her to work harder and harder. As time went by, Orihime became tired, and sad, since she had no time to herself. She longed to have a life of her own, to meet a young man and fall in love.

Concerned about his daughter’s well-being, Tentei arranged for her to meet Hikoboshi (Altair), a cowherd who lived and worked across the river (the Milky Way). When the boy met the girl, they instantly fell in love and married shortly thereafter. The trouble was, once they were married, Orihime stopped weaving cloth for Tentei, while Hikoboshi let his cows stray all over the land.

In anger, Tentei forbade the couple to meet and declared that they be separated and confined to either side of the river. Soon Orihime became despondent and begged her father to allow them to meet again. Moved by his daughter’s copious tears, Tentei allowed the lovers to meet once a year, on the 7th day of the 7th month, on condition that Orihime continued weaving.

A Flock of Magpies to the Rescue

The first time the lovers were to meet, they could not do so as there was no longer a bridge over the river. Orihime cried so profusely that a flock of magpies came to the rescue and made a bridge with their wings so she could cross the river and be reunited with Hikoboshi. That is the beautiful legend of Tanabata.

Tanabata is sometimes celebrated by lighting votive candles or setting off fireworks, or eating somen, thin white noodles that represent the fine weave of Orihime’s cloth.

It is said that if it rains on the day, the magpies cannot construct the bridge because of the rising water of the river, and thus the lovers must wait another year. The rain is called The Tears of Orihime and Hikoboshi.

Luckily, the skies were clear in Kamakura this year, so one can safely surmise that the magpies were out in full force, the lovers did meet, and the story had a happy ending.

Tsurugaoka Hachimangu Shrine is a ten-minute walk from the east exit of Kamakura Station.