Stamp your way across the city with this easy excursion

Kamakura: humble fishing village; ancient capital; beach town. The city has worn many faces over the years and has managed to maintain expressions of each. This special ability to straddle various identities is part of what makes it a popular destination for Japan-based tourists and visitors from abroad alike.

But while many visit the city’s most famous attractions, most notably the Great Buddha (Kamakura Daibutsu), few get a chance to explore the city’s lesser-known houses of worship. By taking on one of the city’s several pilgrimages, however, visitors will find both a plan and the motivation to dig a little deeper, discovering some of Kamakura’s brightest gems along the way.

Kamakura is home to several pilgrimages, but the shortest and most accessible is the Seven Gods of Fortune (Shichifukujin) pilgrimage, which can be completed in a single day. Though there are just seven gods and goddesses, the pilgrimage will take you to eight temples and shrines, some well-known and others off the beaten track.

As you visit the various spiritual grounds, you’ll gather seal stamps (goshuin) on either a specially designed board or in a special notebook for gathering seal stamps (goshuincho). By the end of the day, you’ll have amassed a beautiful collection of Japanese calligraphy and vibrant stamps that’s sure to become a precious keepsake from your Kamakura adventure.

A few things to keep in mind before beginning: Each temple and shrine on the pilgrimage is home to one of the deities of the pilgrimage. As some temples are on multiple pilgrimages, you'll need to let temple staff know which seal stamp you’re after. Of course, if you’re using the specially designed board, there will be no need to specify.

Boards and seal-stamp notebooks can be purchased at temples and shrines on the pilgrimage, and each seal stamp costs approximately ¥300, though this is subject to change. Though generally, etiquette requires that you pay your respects before requesting a seal stamp, busier shrines and temples often suggest that you leave your board or seal-stamp notebook at the temple office or other designated area before touring the grounds. You’ll receive a numbered token or card to exchange for your seal-stamp notebook when you’re ready to leave.

Begin Your Pilgrimage in Kita-Kamakura

Though temples and shrines are numbered, there is no need to perform the pilgrimage in any particular order. The best way to go is to group temples and shrines together geographically for ease and speed. Coming from the Tokyo area via the JR, Kita-Kamakura is the place to start.

Not far from Kita-Kamakura Station is Jochi-ji Temple, one of Kamakura’s Five Great Zen Temples (Kamakura Gozan). A stop on several of the city’s pilgrimages, Jochi-ji is home to Hotei, known in the West as Laughing Buddha or Fat Buddha. Hotei, the god of contentment, can be found in a shallow cave in a back corner of the temple grounds. Give his belly a rub for luck before heading to the temple office, located near the gate, to purchase your board or seal-stamp notebook and your seal stamp.

From Jochi-ji, return to Kita-Kamakura Station and take the JR to Kamakura Station. An alternate route makes use of the Daibutsu-Kuzuharaoka hiking trail, which begins a short walk from Jochi-ji, and covers the Hase-Sakanoshita area before the downtown Kamakura area. Should time and weather cooperate, this is a great way to add a touch of forest-bathing to your pilgrimage.

The area around Kamakura Station boasts four Shichifukujin locations. Beginning with Tsurugaoka Hachimangu Shrine allows you to fully enjoy the shrine’s stunning approach, which during cherry blossom season is lined with trees bursting with delicate pink blossoms. The approach runs along Wakamiyaoji, Kamakura’s main avenue, which is located on the other side of the bus terminal out the east exit of Kamakura Station.

Tsurugaoka Hachimangu is Kamakura’s main shrine, and the grounds are expansive. Though you’ll likely be drawn to the main hall towering over the grounds from atop a hill, for a Shichifukujin seal stamp, you’ll need to veer right after crossing the waterway that connects Heike Pond on the right and Genji Pond on the left.

A bridge joins the mainland to a small island upon which stands Hata-age Benzaiten Shrine, a sub-shrine of Tsurugaoka Hachimangu. It is here that you can acquire a seal stamp for Hata-age Benzaiten, goddess of victory and achievement​. Cherry trees bloom in profusion around the pond during cherry blossom season while lotus flowers rise from its waters from around mid-July to early August, making this one of the most spectacular spots along the pilgrimage depending on the season.

To reach your next destination, leave Tsurugaoka Hachimangu from its main entrance, but rather than walking down Wakamiyaoji in the direction from which you came, head southeastward on Prefectural Route 204. This will take you to Hokai-ji, a quiet little temple known for its bush clover which blooms in mid-September. Hokai-ji—where you’ll find Bishamonten, god of treasure, wealth and warriors—allows visitors to enter the main hall, so take a moment to admire the temple’s objects of worship while a priest prepares your seal stamp.

Approximately five minutes of walking will take you from Hokai-ji to Myoryu-ji, a small, unassuming temple. Here, you will find Jurojin, god of wisdom and longevity. Jurojin is located in a small, shuttered building in front of the main hall, but a larger Jurojin statue, often covered in coin offerings, is located near to where you will receive your seal stamp.

The final temple located in the downtown Kamakura area is situated just several more minutes down the same road you walked to reach Myoryu-ji. Hongaku-ji Temple is home to Ebisu, god of commerce and fishermen. You’ll find Ebisu in the Ebisu-do Hall to the right of the main temple gate and temple office.

Leaving Hongaku-ji by its side entrance will put you on a road leading back to the Kamakura Station area. Aim for the Enoden Line ticket gates located on the western side of the station: It’s time to hop aboard Kamakura’s famous local train.

On to Hase and Sakanoshita

Take the Enoden Line to Hase Station, and once out the ticket gates, follow the signs to Hase Dera Temple and the Hase Kannon, where you’ll find Daikokuten, the god of wealth.

Though the temple’s original statue is only displayed occasionally, a large, brightly painted Daikokuten statue is usually displayed at the front of Daikoku-do Hall for visitors to see—and rub. You’ll want to stick to Daikokuten’s head and shoulders for a chance to have some of the god’s wealth rub off on you.

Hase Dera deserves slow and deliberate exploration, so definitely plan to visit again if you’re short on time. At least try to make it up to the Kannon-do Hall to pay your respects to Kannon, the goddess of mercy, though, as Hase Dera’s statue is a tremendous sight to behold.

A short walk from Hase Dera will take you to Goryo Jinja Shrine and Fukurokuju, god of happiness, prosperity and long life. You’ll find Fukurokuju in the small hall of treasures along with a collection of masks used during the shrine’s annual Menkake Gyoretsu parade, which takes place in September. Goryo Jinja is also known for its hydrangeas and is popular with photographers for its location along the Enoden Line tracks.

Though you’ve now visited seven temples and shrines, you’re still not quite done. This pilgrimage includes a second Benzaiten, this one Myo-on Benzaiten, whom you’ll find at Enoshima Shrine, one of the Three Great Shrines of Benzaiten (Nihon Sandai Benzaiten).

The trip from Hase Station to Enoshima Station on the Enoden Line is a gorgeous one, rain or shine, as it runs along the coast for several stations. Clear days from fall to spring are extra special, as Mt. Fuji is often visible in the distance.

The walk from Enoshima Station to Enoshima Shrine takes approximately 20 minutes and follows a shopping street full of fun shops and restaurants. Don’t fill up too much, though, as Enoshima itself boasts a lively shopping area along the approach to the shrine. Seafood lovers in particular are in for a treat, as turban shells (sazae) and other local ocean specialties are in rich supply.

Enoshima Shrine itself spreads out across the Enoshima hillside and is connected by walking paths that continue around much of the island. Myo-on Benzaiten, the goddess of eloquence, music and wisdom, is located in Hoanden Hall.

After getting your seal stamp, be sure to explore, visiting the Enoshima Sea Candle, a lighthouse and observation tower, for incredible views. The island also hosts an illumination event in the winter months and wandering the colorfully lit paths will guarantee a sparkling end to your Kamakura-Enoshima adventure should you make the trip between late November and mid- to late February (dates vary by year).

Due to the coronavirus, some temples and shrines have altered their seal-stamp procedures and are only providing loose paper prepared with seal stamps to be glued into your seal-stamp notebook. Myoryu-ji Temple suspended its seal-stamp service for the duration of previous states of emergency and may do so again should another state of emergency be declared. 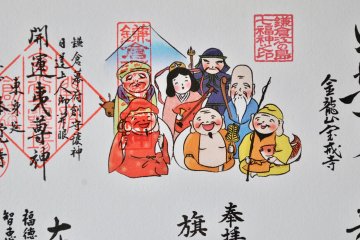 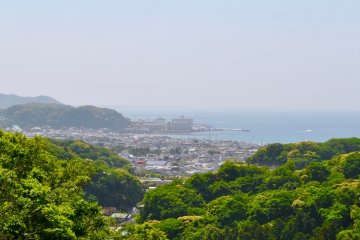 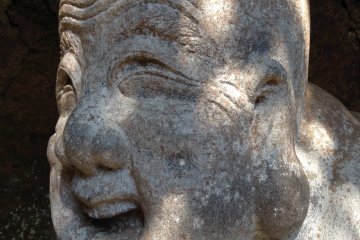 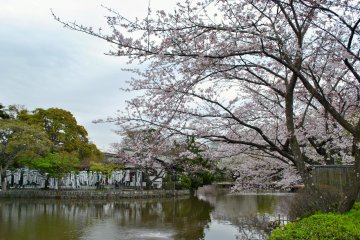 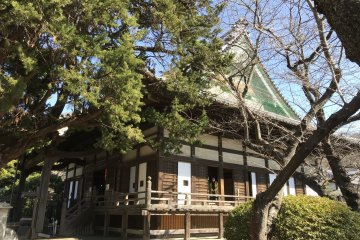 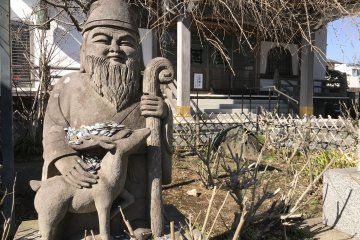 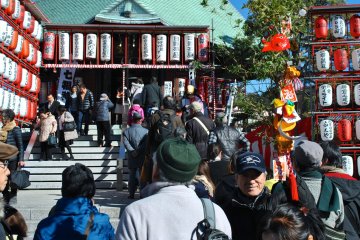 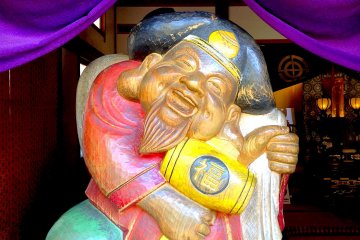 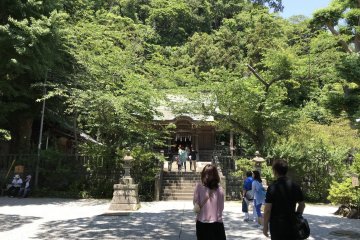 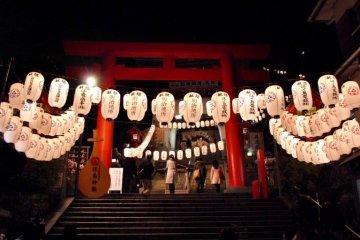