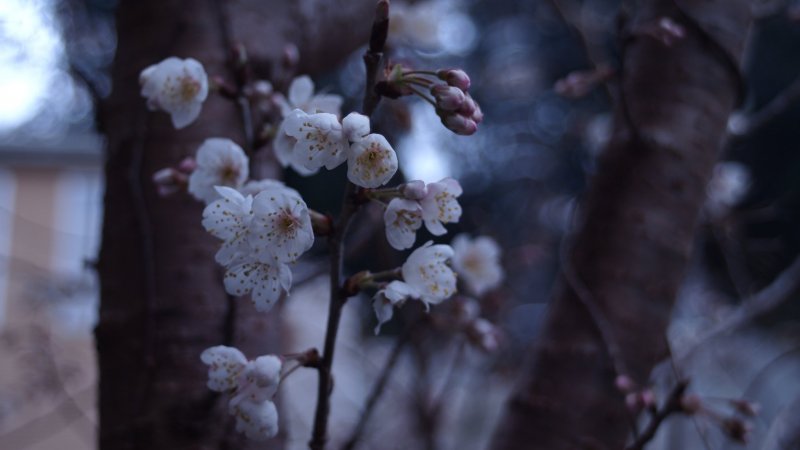 Portrait of a Cherry Tree

A sakura planted at the time of the Great Earthquake

The hibernating buds wake up to full blossoms. 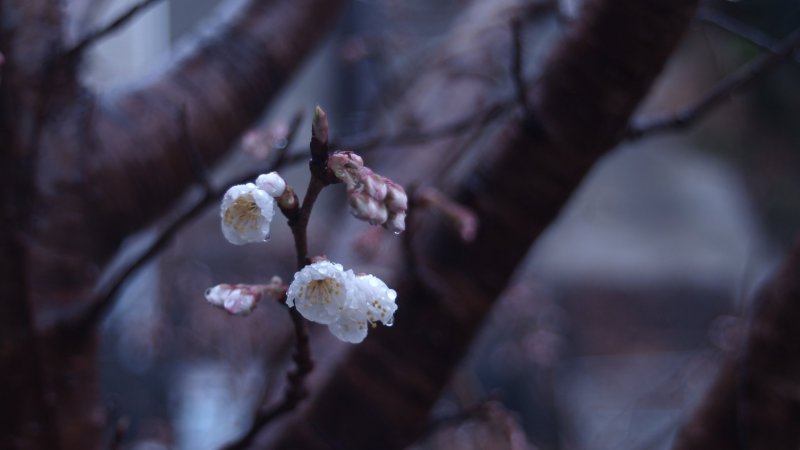 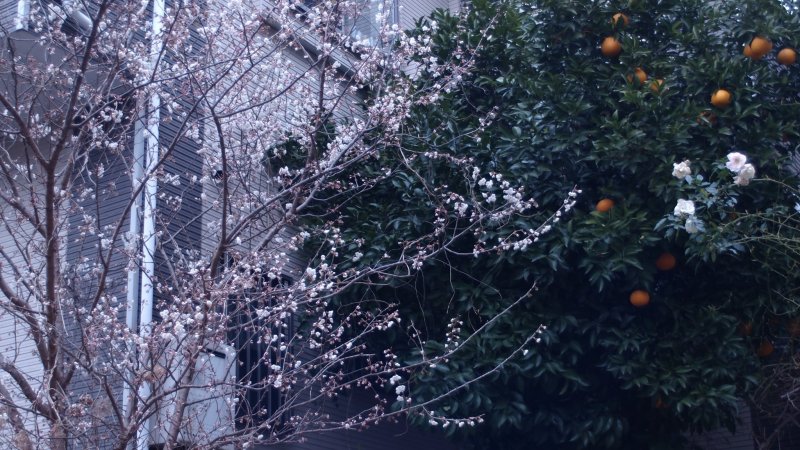 Buds and blossoms, roses and the fully-ripened hassaku oranges exist mutually in the little garden. 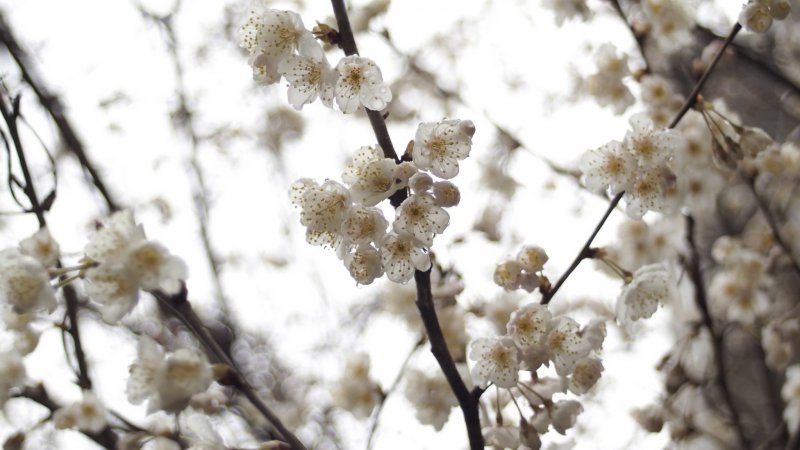 In tears, these blossoms look prettier. 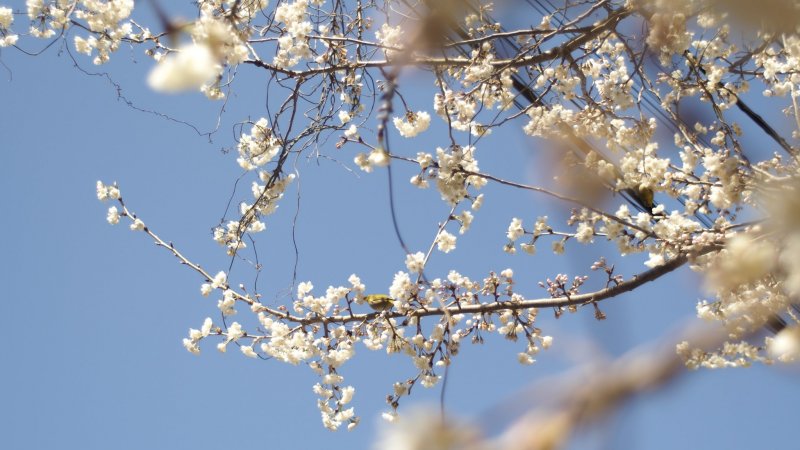 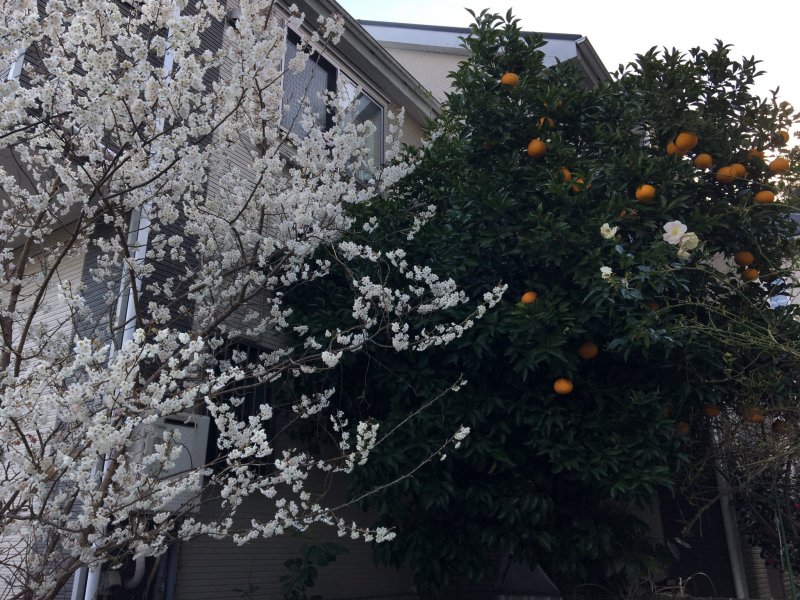 Mankai - every bud has turned into a blossom. 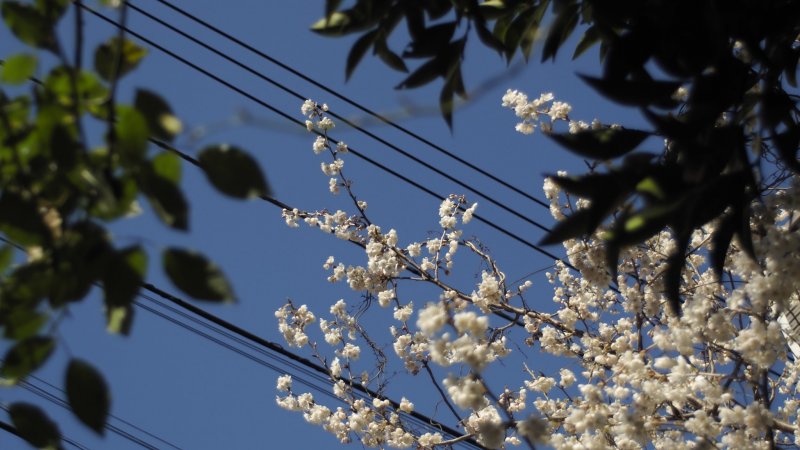 Under the blue Yokohama sky, the blossoms stand out. 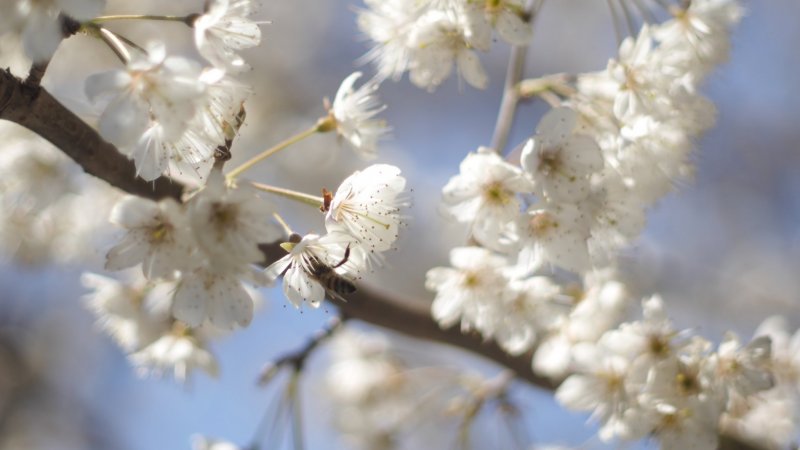 A bee sips the perfumed nectars and pollinates the blossoms. 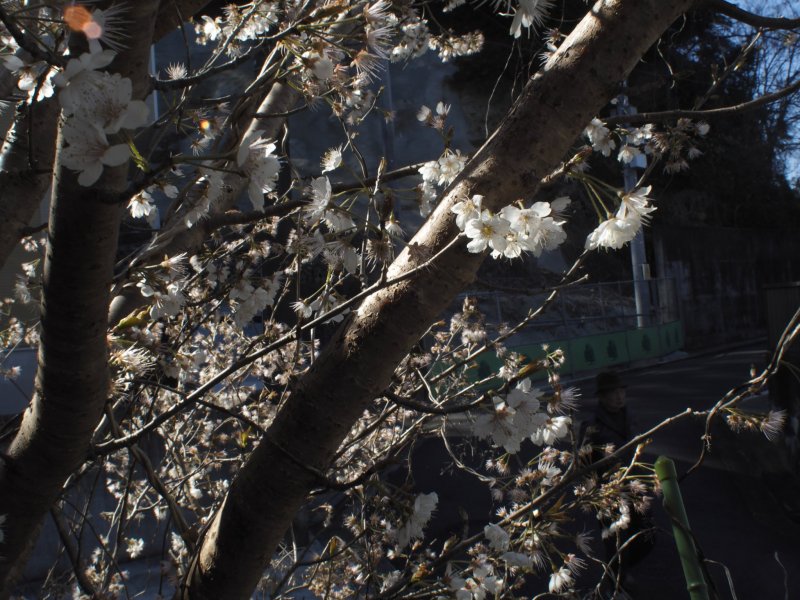 The morning light and shadows watch as the petals start to fall. 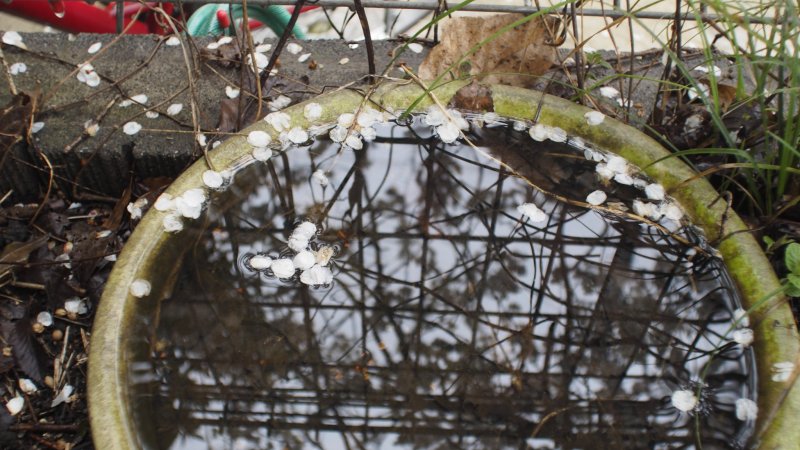 The wind and the rain came to collect the petals. 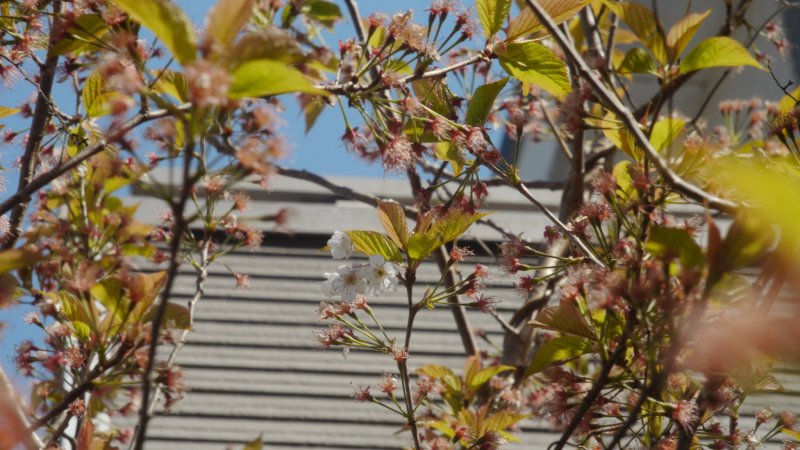 More than two weeks after the first blossoms bloomed, the last ones cling to the bough. 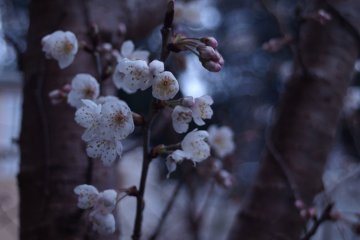 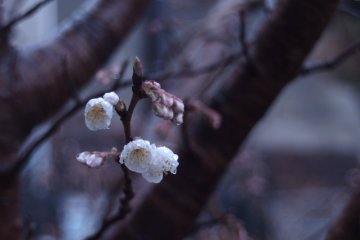 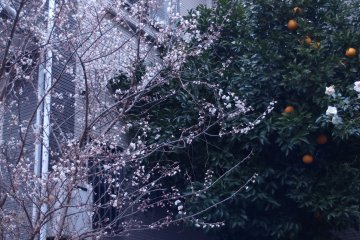 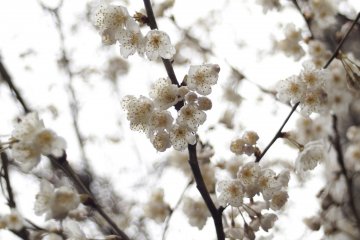 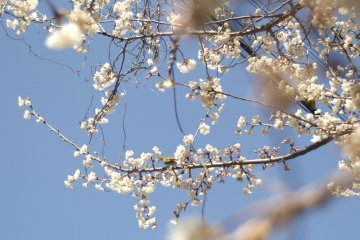 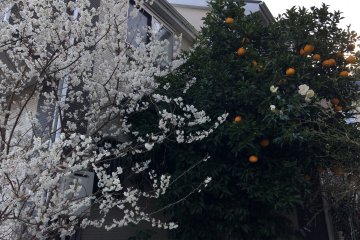 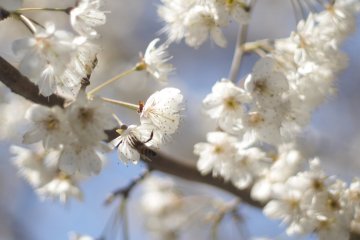 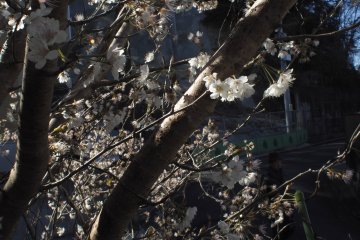 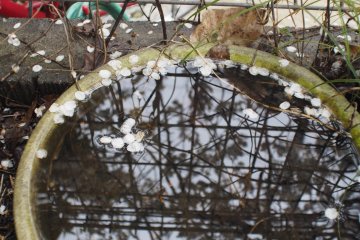 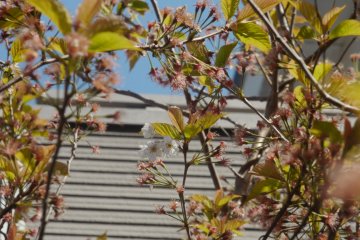 Two days before the Great Earthquake of March 11, 2011, I decided to plant a seedling that I had bought earlier from a local garden center. It was a sapling, about a foot high with a twig and a few leaves; it had been grown from a seed and not grafted from a branch of a matured cherry tree. It was an edohigan sakura.

At the time, my daughter had just graduated from junior high school and she was attending the orientation at a public high school in Yokohama; she was with her mother; I was at home.

In the little space that we have in the front-yard, I chose a corner that gets plenty of sunshine from the east and west. In the brown barren earth that had been filled with construction refuse, I dug a generous hole. Tenderly, I lifted the sakura seedling, buried the roots and covered it with soft soil. After giving it a gentle shower, I whispered: May you grow and bloom together with my daughter.

That was eight years ago. It is now 2019, the third consecutive year that I've been doing hanami in my garden. There are a few things I'd like to mention about this commemorative tree. Firstly, the buds started appearing in the last week of February. Drenched in the rain, on the 4th of March, the first blossoms immaculately bloomed; they were wet with cold tears. Treading carefully, I approached the tree and sniffed at the delicate and fragile-looking whitish blossoms. The scent was pure and profound. It was a moving experience.

Three days later, about half of the hibernating buds woke up cheerfully despite the morning drizzle. I spotted a pair of the green-feathered white-eyed mejiro (zosterops japonicus) darting from branch to branch sipping nectar. The scent around the tree was getting sweeter and more seductive.

On Sunday the 10th, at about 7.00 o’clock in the morning, as I pushed the door open and stepped outside, I beheld a deeply stirring and mysterious sight: the sakura was in full bloom and the air around it was soothingly perfumed! I planted the seedling, I thought, but only God can make a tree and create beauty.

It was still cold. Interrupting my admiration of the morning apparition, I returned inside to prepare coffee. With a big mug of café au lait in my hand, I continued to behold the blossoms. A few minutes had just past since I made my morning brew when another marvelous sight occurred: a hundred tiny honeybees had descended from nowhere! They came in hordes; they came uninvited. But their buzzing created a kind of symphony early in the quiet morning. It was fascinating. The speed and accuracy with which these tiny creatures spin and weave through the blossoms and twigs as they suck drops of nectars and carry pollens was a pure delight to watch. Uninvited guests they were, but they were well behaved and entertaining; I’d like to welcome them back next year.

On Monday, the 11th, the rain came early in the morning and it arrived with the wind. I knew they came, as it is their custom, to take away the petals not long after the full blossoming had occurred. One by one, the petals drenched in beads of heavenly tears, slowly, and gracefully departed with the wind; some flew far away, others fell on the ground beneath. Like gentle flakes of snow, every day they descended with elegance and in silence.

Nine days later, on the 20th of March, the last cluster of blossoms clung to a twig and was adored by the last bumble bee.

From a distance, I stood in front of the tree. Young leaves had started spreading their arms to heaven. I look forward to another hanami next year.