Chinatown does it up big for the Lunar New Year

Chinese New Year is the most important of the traditional Chinese holidays, and what better place to spend it in Japan than Yokohama Chinatown?

The traditional holiday takes place for 15 days (with some special events designated for even earlier than the official starting date), and certainly Chinatown has numerous festivities and celebrations throughout that time. Also called the Spring Festival, it falls in January or February and its dates change yearly based on the lunar cycle.

During the festival, Chinatown is decked out in full decoration, with lanterns, lights and bright colors everywhere. It's worth a visit during this time of year just to see the area dressed up so lavishly. Many shops have discounted prices, and there are plenty of street vendors selling buns, nuts, and bubble tea. The lines for restaurants are ridiculously long starting from lunch time, but die out during the lion dance as people want to see the festivities and then scatter a bit, so planning on dinner is more feasible than lunch if you don't want to wait.

Traditional festivities happen all day at the large temple in Chinatown, called Masabyo in Japanese, and Ma Zhu Miao in Mandarin. Its rich colors and beautiful structure are highlighted under a sea of hanging red lanterns. Visitors buy sticks of incense and plant them in different spots around the temple after hitting a gong and climbing through a ceremonial altar. The rich diversity of China is on full display here, as the activities derive from a wide variety of backgrounds and cultures spread throughout the country and its surrounding areas.

The central attraction of Day 1 is the lion dance, done by a troupe of performers that includes musicians and the lion dancers themselves, a pair who operate within a 2-man lion costume that goes over their heads. The lion, serenaded by the musicians playing drums, cymbals and gongs, will go from shop to shop, stopping at each as it makes its way through Chinatown. In front of each business, the lion will dance and whirl around as firecrackers go off. As the musicians continue to play outside, the lion will enter the shop and greet the staff and customers, which is believed to bring good luck and fortune to the establishment. The lion then comes back outside, and will "eat" a red envelope filled with money, that the shop owner has hung in front of the business on a string, in thanks for the blessings from the lion. The performers in the lion put on a fantastic spectacle, often demonstrating acrobatic abilities to dance, twist and twirl, occasionally with one standing on another's shoulders to rise up and greet onlookers from second-story windows. The dragon visits the temple later on in a fantastic display.

As a word of warning, the scene around the lion is extremely chaotic and potentially hazardous, especially for young children or anyone in a delicate condition. Imagine the most crowded of Tokyo trains during rush hour extending for 100 meters in both directions, and at the center of it, a roped-off performance area for the dancers, musicians and police that needs to be somehow moved down the street every 10 minutes or so as the lion progresses from one shop to the next. And then, all the people fight to get into the best position in front of the new performance area. The result is one of the most uncomfortable pushing and shoving matches that can be witnessed in Japan, with people being carried off in random directions against their will by the tides of the crowd. Those who hate crowds are recommended to wait an hour or so after the performances begin to go watch, because the crowds die down a bit. 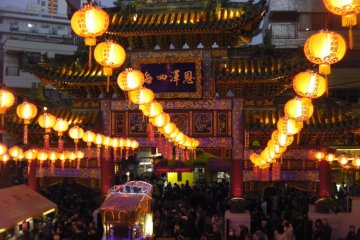 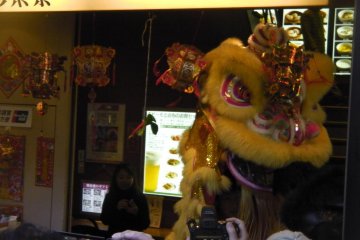 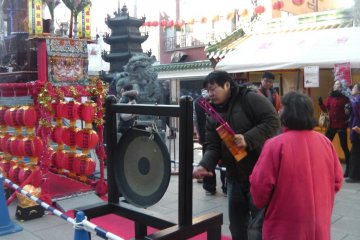 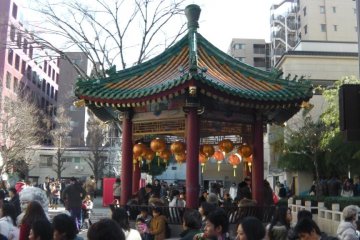 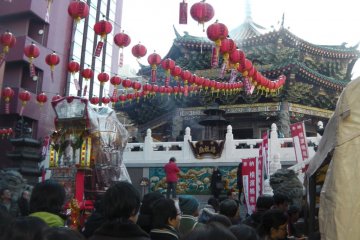 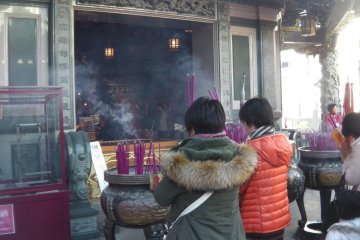 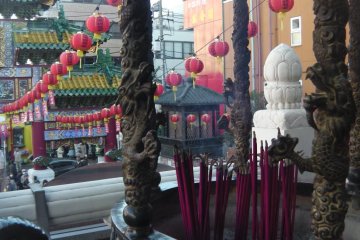 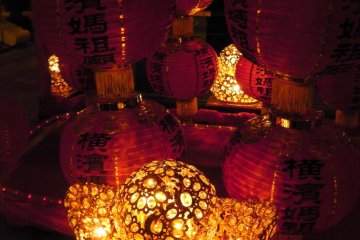 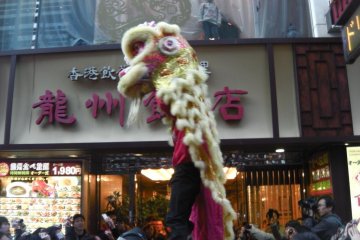 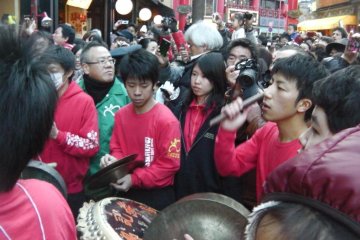 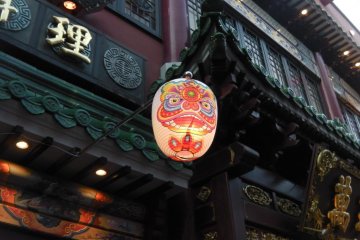 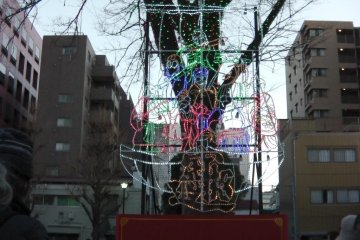