It was a Saturday afternoon and I was at Kencho-ji Temple in Kita-Kamakura. A few minutes before two o’clock a bell rang to signal that the Zen service was about to begin—the service that I had come to observe. Priests wearing light yellow robes had been standing patiently, waiting for the chief priest. Flames of candles on the altar were flickering. Then, the chief priest came into the hall. A solemn low tone of voices began to chant. And all priests joined palms in supplication and bowed. The ritual had begun.

Kencho-ji temple practices regular rituals on the same day each month—the 23rd. They are open to the public to observe. If you would like to observe a Zen ritual up close, come here before 2PM on the 23rd. The ceremony takes place at the Buddha hall. For early birds, there are other options. From 5 a.m. on the 1st, 15th, and 24th, each month, they hold other ceremonies.

The temple is the highest-ranking Rinzai-zen temple in Japan. It was built in 1253 as the first Zen-only training center. The founder was Tokiyori Hojo, the 5th Regent of the Kamakura shogunate. The temple’s first Chief Priest was Rankei Doryu, from China. In those days, Zen teachings and study of not only religion but also culture and science were the most advanced in China. What the founder Tokiyori was aiming at for the monastery was the establishment of an academy that would be used to raise exceptional talent to help rule the Kamakura Shogunate.

Japanese Zen consists of Soto-zen, best represented by the Soji-ji Temple in Tsurumi and Rinzai-zen, best represented by this article’s Kencho-ji Temple. Both originated in China and spread over 13th century Japan. Soto-zen, which was conveyed by Dogen, stresses Zen meditation and regards it as the most important way to reach enlightenment. On the other hand, Rinzai-zen, which was brought to Japan by Doryu, takes paradoxical questions more seriously. But they also stress the importance of Zen meditation for their practice. The difference is the balance of the two. More Zen meditation? Or more paradoxical questions? Both sects insist that spiritual awakening should be passed on from one mentor to one disciple. This means that enlightenment cannot be expressed verbally, but that it flows from one side to the other through meditation and paradoxical questions.

Details of the Main Buildings

The arrangement of the temple buildings in Zen is quite simple. Five important temple buildings are aligned in a straight line: An Outer Gate (So-mon), a Main Gate (San-mon), the Buddha Hall (Butsu-den), the Dharma Hall (Ha-tto), and Hojo.

After entering the Outer Gate (near the road), you quickly come to the Main Gate. It consists of two stories; the lower portion is just open space; the upper portion houses a statue of Buddha and five hundred small statues of arakan (Buddhist monks who have attained Nirvana). These are not open to public viewing, except on special days.

In the Buddha Hall, a wooden statue of Jizo (Bodhisattva who looks over children, travelers and underworld) is installed. The reason is that the location of the current Kencho-ji sits on ground that used to be called “the valley of hell”, because it had been used as an execution grounds. According to Buddhist teaching, Jizo exists to redeem us from all the difficulties that occur in the six transmigrations of the soul.

Dharma Hall is the place in which Buddhist sermons take place. There are three things to pay attention to here. The principle statue is a thousand-armed Goddess of Mercy. In front of it, there is a Buddha enduring ascetic meditation. It was donated from the Pakistan government in 2005, after the Aichi Prefecture International Exposition. Next, please take a look at the ceiling. A dragon is looking down at us. In Buddhism, dragons are a symbol of learning.

Behind Dharma Hall is Hojo. It used to be the head priest’s living quarters, but is now a room for Za-zen training. Take off your shoes, and go into the building. A wooden walkway encircles the main room. A Zen garden sits in back of the room. There are several benches here. Sit quietly and you can soak in the feeling of Zen.

You can also see several old trees on the premises. They are 750-year-old junipers brought by the first chief priest Doryu from ancient China. Looking at these big trees, I think fondly of him and admire him for planting the seeds of Zen culture in Japan.

Find out more about Kenchoji Temple. 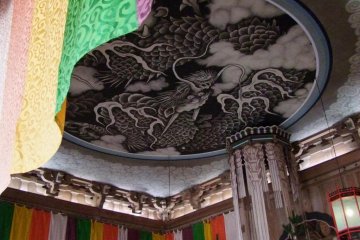 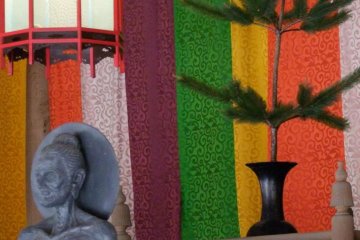 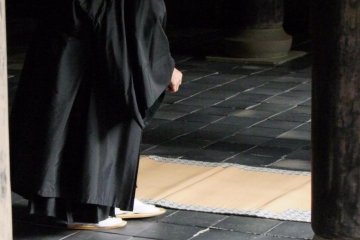 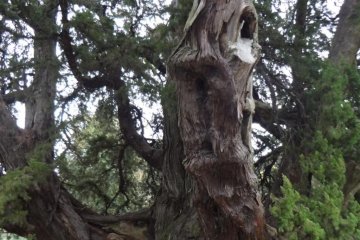 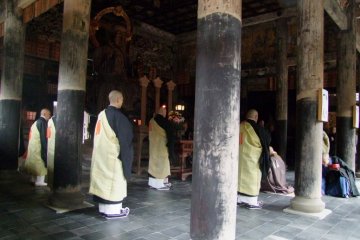 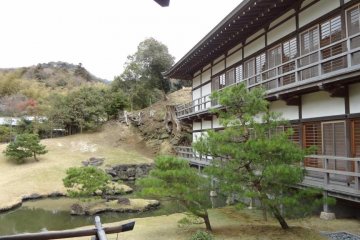 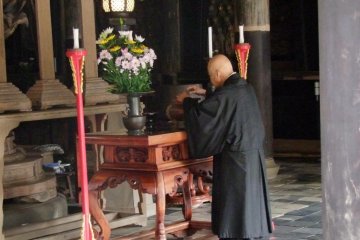 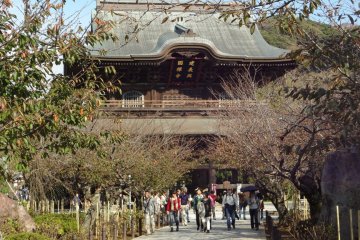 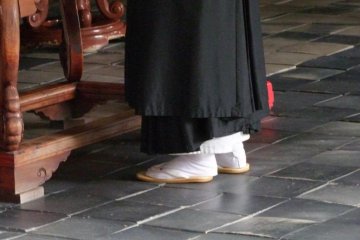 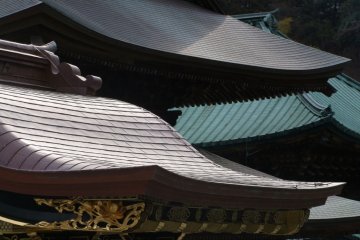