The Southernmost Point of Shikoku

Cape Ashizuri, the southernmost point of Shikoku, is part of the Ashizuri-Uwakai National Park. It can be reached on foot from the town of Ashizuri via a seaside walking path, or you can drive all the way into the park through a "tunnel" of camellia trees via the breathtaking "Skyline" central road, which features steep climbs. The small tip of land has been made into a park clustered with sightseeing spots and featuring gorgeous ocean views from stunning, 80 m high granite cliffs. A 2 km wooded walking path winds around the coastline from point to point, including stops at the cape`s "Seven Mysteries," such as a supposedly bottomless well.

For the best view, head straight up to the main observation deck, Tengu-no-Hana, for a 270 degree seascape of the sparkling Pacific. In this area the Japan Current makes its closest approach to land, crashing and swirling violently into the rocks below. The horizon curves out in an arc in the distance, and a beautiful white lighthouse, built in 1914 and now a symbol of the cape, beckons from a nearby point. If you`re very lucky, you might even see a whale!

The Buddhist temple here, Kongofuku-ji, is one of the largest on Shikoku`s 88 Temple Pilgrammage. It is said to have been founded by Kobo Daishi himself back in 822. It is on the left side of the road entering the park, and is sometimes packed with busloads of pilgrims. It is definitely worth a walk through the grounds. Also, check out the statue of Nakahama "John" Manjiro, the first Japanese person to visit the U.S., near the front of the park. Manjiro was shipwrecked and then rescued near Cape Ashizuri.

Further explorations of the area might lead to sea turtle sightings, the Hakusan Do-mon 16 m high rock arch and cave, or other fascinating geological formations. To the west is a well-known surf-fishing spot right in the Japan Current. Subtropical plants like palm trees abound, and on a bright and sunny day with the deep blue water sparkling it truly feels like paradise. You could easily spend a whole day here with a picnic lunch and your camera if the weather is right.

The drive to Ashizuri from Kochi City is long but beautiful. There are many scenic rest areas and small aquariums and parks to stop at along the ocean road. I highly recommend the under-sea observation tower (Ashizuri Kaiteikan) at Tatsukushi Marine Park. You descend 10 m under the water and can see the tide rushing in and out, bringing schools of fish swirling past the portholes. Outside, oddly shaped sandstone rocks covered in fast-moving, crab-like creatures are quite the sight.

Cape Ashizuri and the surrounding area offer natural beauty that may be unmatched in Kochi, the prefecture of natural beauty. Don`t miss out on these gorgeous views! 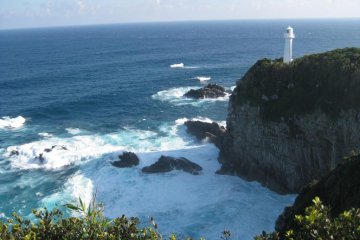 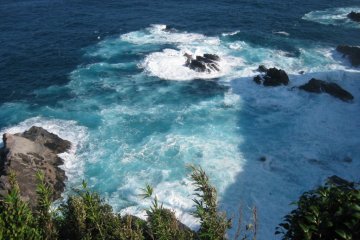 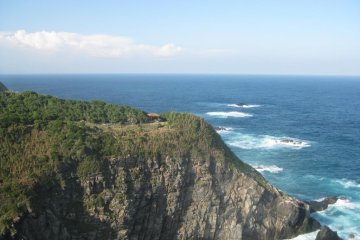 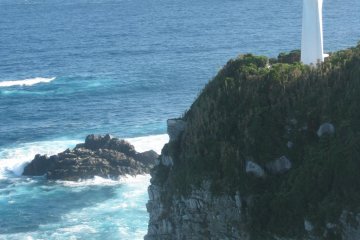 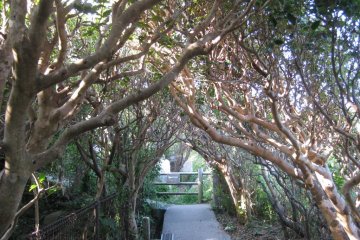 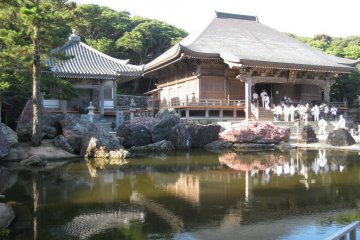 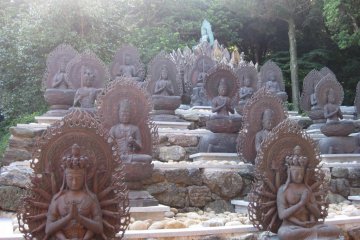 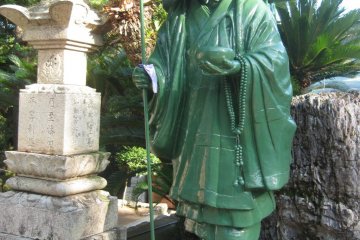 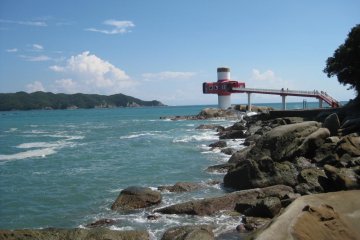 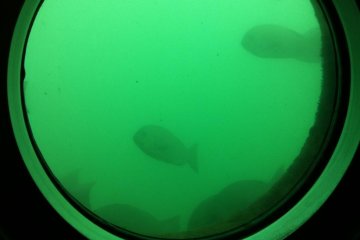 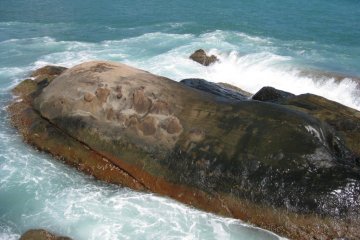