If you're looking for lunch while in the Suizen-ji Garden area of Kumamoto City, consider dropping by Cafe La Paix. Located a few minutes' walk from the garden entrance and literally just across the street from the Suizenji Garden Tram Stop, Cafe La Paix won't impress you with its flashiness or lure you inside with its window display. In fact, the exterior is simply a white-washed wall with a few signs indicating the cafe on the premises.

Inside, the theme of simplicity continues. The walls are a bland yet soothing white, while the tables are mostly "blonde" wood. A short bar near the kitchen offers a few counter-style seats. Some may call it functional or utilitarian but the lack of decoration in this case merely felt relaxing. Though there's not as much natural light entering the building due to its construction style, the white walls make the whole scene feel brighter.

The menu is short, with three main lunch sets and a variety of drinks. My choice of the pan (bread) lunch featured a delicious, cheese-laden Croque Monsieur, a typically French sandwich that consists of ham and cheese smothered in Bechamel sauce. Cafe La Paix livened theirs up with a few cherry tomatoes and some pesto mixed in with the Bechamel. While I don't usually go for heavy lunches like this, I didn't feel overwhelmed by the portion size. The rest of my set included a bowl of cold, creamy potato soup, a salad with renkon (lotus root) chips as a garnish and a small serving of banana cake for dessert. Normally, set meals include a choice of coffee or tea but here, we were offered the option of fresh squeezed juices at no extra charge. I went with mikan, but apple and grapefruit were also available.

My friend chose the "rice" set, which was a bit misleading since her main plate came out with not a grain of rice on it! Instead, she had a variety of small bites, from grilled vegetables to a veggie and cheese pie to appetizer-sized ham rolls. Her meal also included a bowl of rice, a small portion of soup and a small green salad, as well as the aforementioned banana cake.

Lunch prices range from ¥1000 to ¥1200 and lunch is served from 11:30-14:30. However, you can stop by at any time for a cup of coffee or tea or a tasty dessert. If you'd rather carry your caffeine out with you, they do offer a small take-out menu of drinks.

Cafe La Paix might not look like it's trying to attract a crowd, but by noon (30 minutes after their opening time), nearly every table was occupied. This is a great place to come after a wander of nearby Suizen-ji Garden but you might want to consider arriving in the off-peak hours. 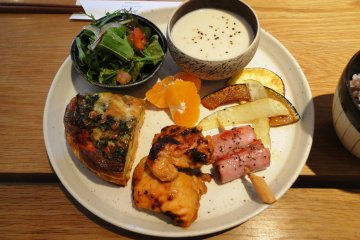 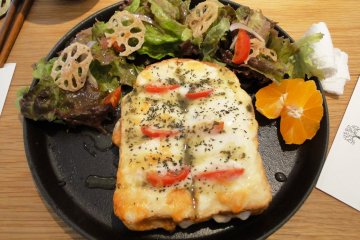 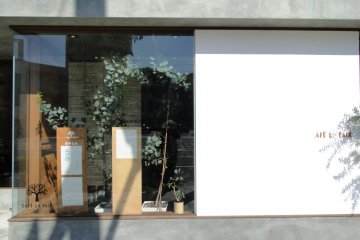