An old aqueduct in Kumamoto's countryside

In the mid 1800s, the farmers of the Shiraito plain in southeastern Kumamoto had a problem. Rice paddies weren't receiving enough water and the peaks and valleys of the area assured that water run-off didn't quite go where the farmers desired. In 1854, local Yamato village official Yasunosuke Futa hit upon an idea. His solution? An aqueduct that could carry much needed water to the drought-prone region.

Futa's creation - the Tsujun Bridge or Tsujunkyo - still stands today, on the outskirts of Yamato town near the Miyazaki border. In its heyday, the bridge was part of a system that carried water to over 100 hectares of land. While still in use today, Tsujunkyo is mostly known for its unique water release system. Every weekend and holiday from late spring to late fall (approximately May to November), gallons of water are released from the sides of the bridge at noon, offering visitors a stunning display of 19th century architecture in action. The water doesn't actually serve any purpose for the surrounding rice paddies. Rather, it is a way to flush the aqueduct's pipes of silt and sandy build-up, emptying it into the river below.

The display lasts for around 20-25 minutes, starting off with a gush and petering down to trickle by the end. Visitors can climb the path to the side of the bridge and stand right on top the aqueduct itself for a close-up view of the process.

Continue on to the other side of the bridge and the path leads down through a bamboo forest to the Gorogataki Waterfall. The water here tumbles at least 50 meters to the pool below and it's almost a guarantee to see a rainbow in the swirling mists. The best views of the chute are from the suspension bridge. If you choose to follow the path across the bridge, it will lead you back up through the rice paddies to the opposite side of the bridge. In the fall, it offers an excellent opportunity to see the rice harvest up close. Be careful in winter, as there is often snow and ice on the path.

Tsujunkyo boasts a big parking lot and an onsite restaurant, as well as farm stands and a few gift kiosks.The place can get quite busy on weekends around the time of the water release but is fairly quiet the rest of the time. 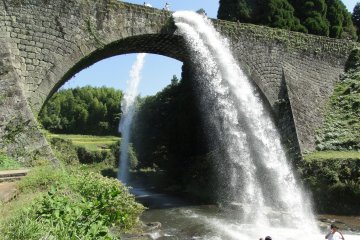 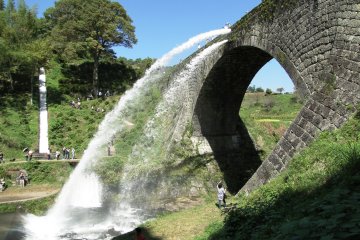 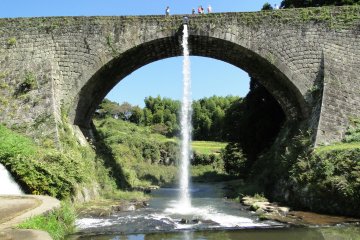