All the Ways of Falling

In the Tale of Genji it is written, ‘A sheaf of autumn leaves admired in solitude is like damasks worn in the darkness of the night.’ By being one with nature, there is a promise of capturing its beauty in your heart. Man enters nature, and nature, in turn, enters man.

Since the tenth century, the royal court in Kyoto has communed with nature by boating, composing poetry and collecting brightly colored leaves. This appreciation of autumn colors, Momiji-gari, literally means hunting for autumn leaves. What makes this allure of sublime beauty so mesmerizing that people hunt with it with their hearts and minds? By the seventeenth century, scholars had recorded up to two hundred different kinds of maple trees; such was the intense desire to capture its beauty. At this time, the enjoyment of Momiji-gari spread to the townsfolk and they began to hold lavish celebrations to the backdrop of the falling maple leaves. While the word momiji is synonymous with maple, it is also used for all trees with red or yellow autumnal leaves, such as the ginkgo and the lacquer tree.

These days, to experience the crisp autumn air and sublime colors in the soft sunlight, you just have to head to the mountains in Arishiyama, Higashiyama and the Ohara districts. Here the temperature difference between the afternoon and evening is most marked, which accentuates the red and orange colors of the leaves. Ohara is first with the changing colors in late October, followed by the Tofukuji Temple, one of Kyoto's best and most popular autumn viewing spots, just one stop after Kyoto towards Nara.

On the other hand, the ancient tradition of autumn foliage viewing by boat is can be enjoyed in Kyoto’s western highlands, where you can catch the Scenic Train to Kameoka, and then taking a Hozu River Boat Tour for a two hour trip back down to Arishiyama. You can also hire a row boat from Arishiyama and gently float towards the forests north of the bridge.

"On Hozu River Maple leaves are floating On Mount Atago High upstream, they are Already falling from the trees"

Inspired from the book of Manyoshu, “Collection of Ten Thousand Leaves"

The love affair with autumn colors can also be seen in the handicraft and kimono shops of Kyoto, where maple motifs are splashed across everything from folding fans to Kimono obis. My favorite folding fan has an autumn motif on one side, and spring on the other. What a great way to celebrate two of the most pleasant seasons in Kyoto.

Likewise Momiji-gari expresses itself in many other ways, from woodblock prints to Kyoto sweets known as Kyo-gashi.

One of most magical experiences in this time can be seen in Takao, deep in a forested valley north of Kyoto. In November several Japanese gardens host evening illuminations such as the Jingoji Temple.

In December as the fall colors head south, we follow nature’s course in Higashiyama and Arishiyama, where the autumn annual illumination festival is held. My favorite garden is in Kodaji Temple, where the mirror like lake reflects the delicate, graceful beauty of the autumn leaves.

If you wish to see fall foliage earlier, Nikko from the middle of October offers views of famous ancient shrines such as Futarasan, nestled amongst the vivid red and orange colors of fall foliage. There are many other places to visit in Nikko, including the Senjogahara Wetlands and the beautifully winding Irohazaka Road.

From late September to early October, Aomori’s Mount Hakkoda, part of a volcanic mountain range in the Northern tip of Honshu, is where autumn leaves makes its first landfall. There is a ropeway that gives you a great view of both the autumn colors and the surrounding mountains. With snow falling as early as late October, you can see the quiet beauty of the white snow against the backdrop of red and yellow leaves.

Frozen in the ice

Find out more about Kodaiji. 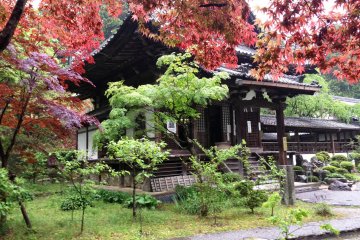 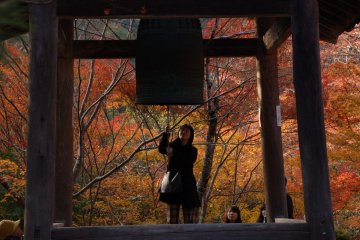 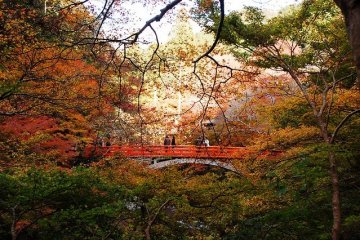