Rediscover the past through Shin Hanga and Ukiyo e

A man with multiple names. A wanderer and a misunderstood man, but with a creativity that was too confronting for his straight-jacketed Confucian masters. Like many kids, the young Hokusai was fascinated with books and particularly with their pictures, and he was to open for me a window into the world filled with joie de vivre. So I make my way to the back streets of Gion, to find the very places portrayed in his woodblock prints.

In the heart of the Shinmonzen Street in the Antique district is Ezoshi Gallery, a treasure house that needs no decoration. By focusing on Japanese Art from the 17th Century, it is popular with locals and foreign art buyers alike. It has an eclectic collection of kabuki prints, ukiyo- e, shin hanga, as well as classic black and white photographs of famous actors and actresses in the early 20th Century; like the owner’s interpretation of the Belle Époque. According to Tsuyoshi Yamao, the store manager, the collection represents the essence of prints that Japan gave birth to. Besides works from the Edo and Meiji Periods, there is also a wide range of Taisho, Showa and contemporary prints, as he is keen to imbibe us with the culture and customs of each period. Yamao takes pride in showing me a number of original prints from folk art and sosaku-hanga master Shikō Munakata, who once said that woodblock prints were "Like the vastness of space, like a universe unlimited, untold, unattainable, and inscrutable”. While this is called an art gallery, it is set up more like a store for discerning and budding collectors of fine art. For me, my search for Hokusai and his contemporaries, such as Utamaro and Hiroshige was fulfilled here, along with some of the more talented up and coming artists.

I am particularly drawn to its Ukiyo-e or woodblock print collection, particularly those produced in the Edo period, a time of new found pleasures of the floating world. Unlike the earlier art from the temples and the courts, Ukiyo-e celebrated beauty in everyday life, though now looking back, it was a documentary of the social values, fashion and history of the time. On the wall was an Nineteenth Century painting of the various Kabuki actors, whose names are passed each generation to this day.

From the garish costumes of the Kabuki actors, to the geishas and merchants in the dressing rooms and public baths, Ukiyo-e celebrated life boldly and with glorious technicolor, and is in many senses a modern art, celebrating the joy of everyday life rather than religious art of Buddhist temples or the strict Spartan zeal of the samurai. It is an art that has great resonance today, particularly amongst collectors and travelers who come to Kyoto to get a taste of the elixir of life.

These days the Japanese have caught up with the American and French in their love of Ukiyo-e, and not just the common man, but in the elite art circles as well. No longer are the best Ukiyo-e paintings in Boston, New York and Paris. Its flat, slightly abstract look was influenced by ink paintings and readily crosses over to manga and anime.

At the same time, contemporary artists like Nishijima Katsuyuki have added to the Ukiyo-e tradition by their interpretation of woodblock prints. Simple, photo like compositions of the back streets of Kyoto, a quiet moment captured with the Noren cloth screens swaying in the breeze, or a set of pastel Japanese umbrellas called wasaga by the side of a traditional merchant’s machiya townhouse, all captured with the magic that would bring a smile to the face of a Studio Ghibli animator. While lacking the raw emotions of the earlier kabuki actor prints, it has done its bit to transform Ukiyo-e to a higher bracket of art. 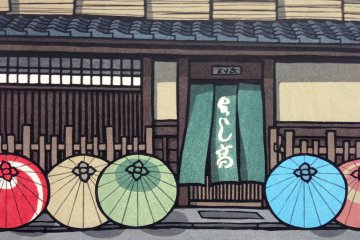 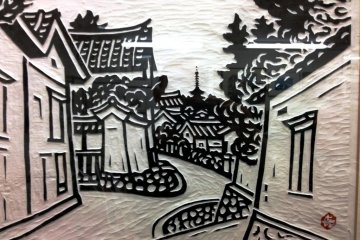 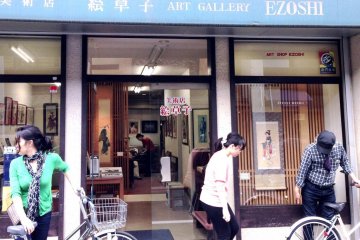