Kinkaku-ji Temple (completed in 1398 and now officially called Rokuon-ji Temple) is usually translated as “Temple of the Golden Pavilion.” Although we tend to focus on the gorgeous building there called Kinkaku, the whole area is actually very special.

A retired Shogun, Ashikaga Yoshimitsu (1358-1408) constructed a private villa for himself named Kitayama-dono. It included the Kinkaku pavilion, and was used as a guesthouse for the Emperor, foreign envoys, and nobles. As a politician, Yoshimitsu rendered two remarkable services to Japan. First, he brought to an end the more than fifty-year conflict (1336-1392) between the two Imperial Courts. Second, he revived diplomatic ties and international commerce with the Ming Dynasty. It was the first official contact between the two sides in 500 years, since the days of the Tang Dynasty. Yoshimitsu might have built Kinkaku as a way of expressing his success and power.

The villa became a branch of Shokoku-ji Temple after Yoshimitsu's death, but was still a very popular place to have parties among noblemen. The highlight was of course Kinkaku, but people in those days also enjoyed walks around its double-layered garden, boating in the large pond, and the amazing view from the bridge over the pond.

From 1402 to 1407, Yoshimitsu entertained the envoys from the Ming Dynasty every year here in Kitayama-dono. In 1408 Emperor Go-komatsu visited Kitayama-dono and stayed for three weeks. During that time, Yoshimitsu held a reception party and entertained the Emperor with Mai dance shows, Sarugaku operas, Kemari football games, Renga or Waka poetry competitions, and boating in the pond.

The diary of a priest of Shokoku-ji Temple describes the villa as being,

“...almost like heaven; this fascinating villa is talked about among people all over the city. There are some very tall structures, a fascinating pavilion, and splendid buildings with beautiful paintings and carvings. They are scattered in the precincts, as if they were stars in the sky.”

Another diary written 200 years later in 1638 by a priest of Kinkaku-ji Temple says,

"We enjoyed green tea at a teahouse, and walked up the hill to eat lunch and drink a bit of saké​. After that, we came back to Kinkaku and took a boat ride. We enjoyed it. Later, we had udon noodles and rice mixed with various ingredients."

Details of the golden pavilion

The pavilion is a three-story building. The first floor consists of a wide room called Shinden-zukuri; the second floor has two rooms divided by paper sliding doors and a balcony, called Buke-zukuri; and the third floor includes a box containing Buddha’s bones. The room is bordered by arch-shaped windows, called Zenshu-yo. The outside of the first story is of a dark wood. In contrast, the upper two stories are wrapped with brilliant golden walls. As the pavilion is on the edge of a large pond, the mirror image of the building flickers on the water. The dark colored first story, which most people don't even notice, offsets the shining upper stories.​

History of the garden

The original owner of this land was Nakasukeo (1157-1222), a court noble. And the highest-ranking court noble, Saionji Kintsune (1171-1244) bought it and built a huge family temple and villa, and named it Kitayama-dai. He built a fabulous excursion garden walkway around the pond with artificial falls and lots of nice rocks. And he also constructed a stone chamber for a Buddhist statue on the hill. According to the diary of nobleman and poet Fujiwara no Teika, Teika enjoyed the fantastic gardens and worshiped a new Buddhist statue in Kitayama-dai. Teika wrote: “Nothing can surpass this.” But the beautiful gardens came into ruin when the Saionji Family lost their power.

In 1397, Yoshimitsu obtained the land from the Saionji Family and reproduced the splendid Kitayama-dono villa in it. He modeled the villa after Saiho-ji Temple. Saiho-ji had a double-layered garden combined with a lower pond excursion garden and a dry upper garden. The lower garden had a two-story pavilion by the pond, while the upper garden was constructed in and around an old cemetery. It is well known that Yoshimitsu admired Zen Priest Muso Soseki and often visited Saiho-ji Temple, a temple that Muso Soseki had regenerated 50 years before. Yoshimitsu even stayed all night at the temple for his own Zen practice.​

The pond excursion garden including Kinkaku is the first layer of the garden. It suggests the existence of a paradise in this world. When the sun is setting, the golden walls of the pavilion are lit up with sunshine. Kinkaku was once connected with the east side of the pond by an arched bridge. At that time, standing on the top of the bridge which was very close to the pavilion, we might have been able to see both the brilliantly illuminated Kinkaku and shining reflections of it on the pond's surface. Buddhists believe that Pure Land Paradise is in the west. So, the bridge acted as an intermediary between a paradise in this world and the Land of the Pure.

The upper garden on the hill is the second layer of the total garden, suggesting the land of those who have passed. This is because the former owner of the land had a family temple and a cemetery there. Yoshimitsu made clever use of the old cemetery in planning the garden and tried to show the contrast of the brilliant golden pavilion with the world of the dead.

If you're interested in visiting these three temples in a tour, please visit this page. 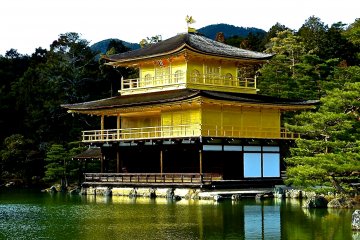 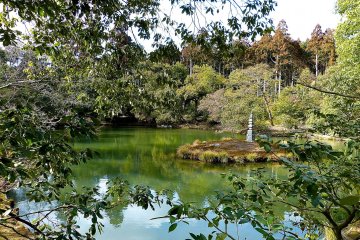 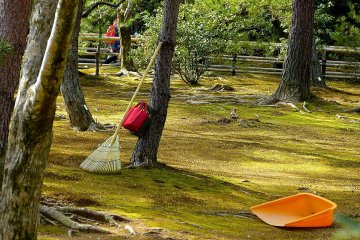 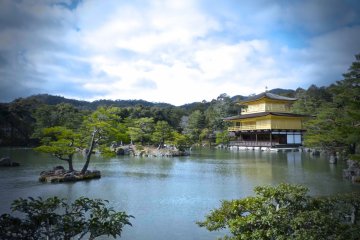 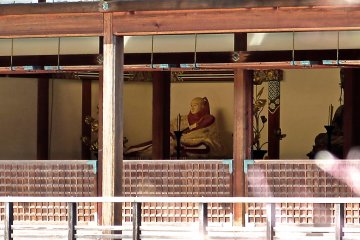 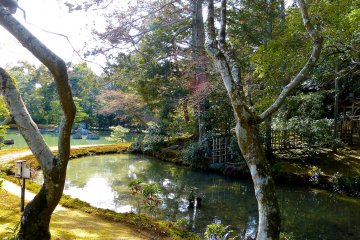 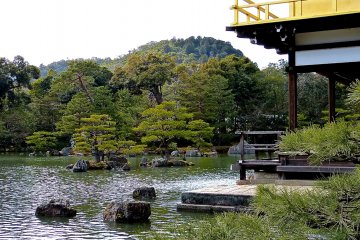 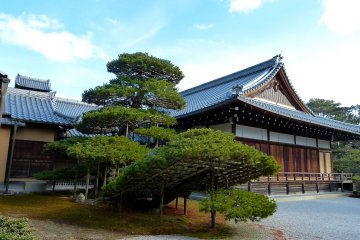 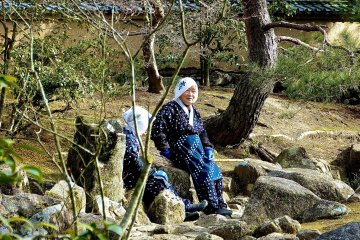 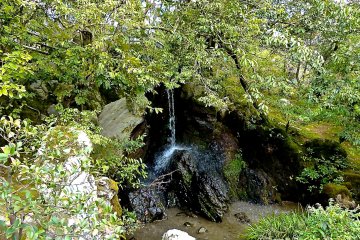 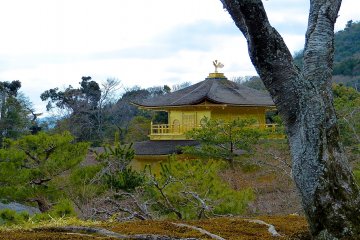 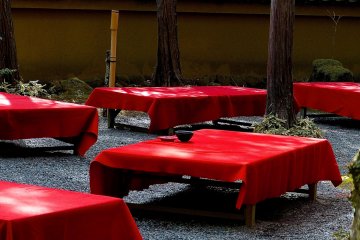