Don’t stare into the monkeys’ eyes.

It's sound advice before visiting Kyoto’s monkey park: A mountainside where I hiked among wild monkeys, merely a visitor to their home. After hearing about Monkey Park Iwatayama (sometimes it has an Arashiyama in the name), it was an attraction I had to see while in Kyoto in April.

The park is located in Arashiyama, one of Kyoto’s busiest tourist areas, and is easily accessible by train. It boasts about 120 snow monkeys, which are also called “Japanese macaque.” They are native to Japan, and, yes, these are the type of monkeys seen in iconic photos in which they’re bathing at hot springs in winter.

While the monkeys are human-fed (even tourists have a chance to feed them), they are still wild, the park assures. The “don’t stare” and don’t touch warnings should be followed, though, I witnessed the friendlier monkeys come just centimeters away from visitors.

Total travel time from Kyoto Station ranges from 35 to 55 minutes, depending on mode of transportation. The park’s entrance is a short walk up from Iwatayama’s (Iwata mountain’s) base. I saw a small sign for it after crossing the Oi River.

Entering the park, I immediately spotted a monkey scrambling in the tall grass just meters away. I’d not seen this animal anywhere but a zoo. At first, being so close was a bit nerve-wracking, but it was also refreshing to see these creatures free from a glass cage. The active ones would swing from tree branches and run up the mountainside. The hike itself is fairly easy and takes about 30 minutes.

Following the path, at the top is a view of the city, mountains and river, with a bright blue sky draped over it all on a sunny day. After fawning over the view (Japan really hypes up -- and does not disappoint -- on that “view”), there is a chance to feed the monkeys.

They're eager to gobble up apple chunks tourists can buy and offer through the safety of an enclosed area. They grab the food right out of your hand, as they hang on the outside of the caged-in window area. 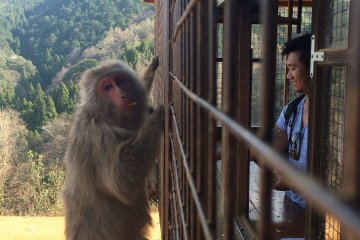 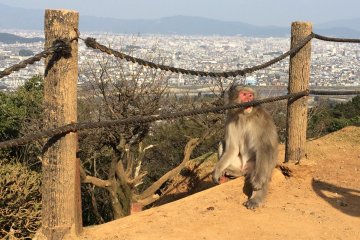 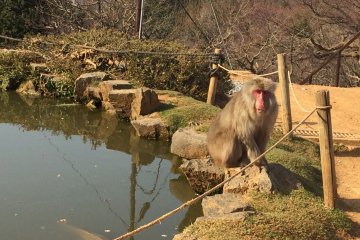 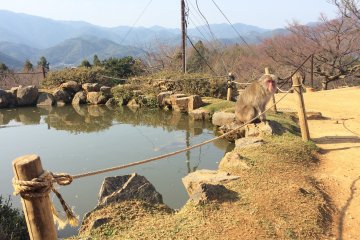 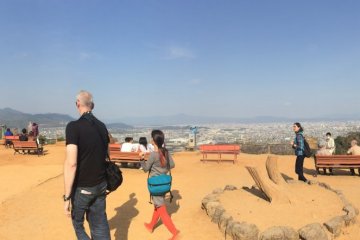 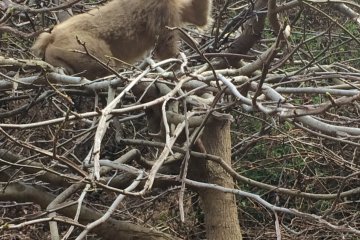 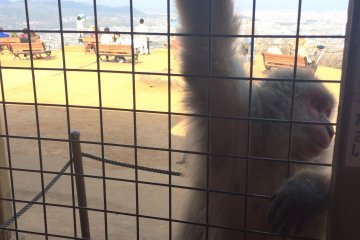