Spinning tops made of thread, one and only in the world

The other day I went to Kyoto to see my Australian friend who was visiting Japan. He had a guide who was going to take us to some 'secret' places. This guide, who turned out to be one of 25 Kyoto Tourism Ambassadors, didn't even tell us where he was taking us to. It was a 'magical mystery tour' in its true sense. He said, "we'll take a train and get off at Nijo-jo mae station". He made us buy train tickets, and just kept walking in front of us. We were like two bewildered puppies following after our whimsical master! Then he stopped suddenly in front of some shop and said, "Here we are!". Well, where were we? He ushered us to a shop called, 'Jackyu', and as soon as we entered we found out what kind of shop it was. Spinning tops! But Spinning tops are not so unique, at least to Japanese people, so what makes this place and this tops such a 'secret'?!

Secret 1; Not wooden, but made of thread!

Usually, spinning tops in Japan are all made of wood. But spinning tops created here are made of cotton threads. As you can see by the photos here, it all starts from a thin white cotton thread. You line some of them flat and make a flat string, coat it to make it strong, then wind it around a rod, which makes the Kyo Koma (Kyoto Spinning Tops) sold here.

Secret 2; There's only one man in the world who can make them

Kyo Koma craftsman Mr. Yoshiyuki Nakamura has inherited this traditional technique from his grandfather, who retired 30 years ago. As a child, he learned from his grandfather how to make Kyo Koma. Grown up now, Mr. Nakamura was working as an office worker. One day, about 10 years ago, he suddenly got curious, did some research, and found out there was no one who was practicing this tradition. It was revealed that his grandfather's retirement was the end of it, and he was the only one in the world who could revive the lost tradition. Loss of tradition, loss of culture...he felt responsible for the great loss... Then he made a big decision. Although many people tried to stop him, for it would be hard to make a living only making and selling the Kyo Koma, toy, he quit his job and started to make Kyo Koma to preserve the tradition! What a great man, and a brave decision!

Kyo Koma is said to have been used as a toy among aristocratic ladies in Kyoto during the Azuchi Momoyama Period (1573–1603) when Oda Nobunaga and Toyotomi Hideyoshi reigned over Japan. Ladies in high society made Kyo Koma from their Kimono fabric thread by winding them around a bamboo stick, and play with them at Imperial Court. Also, it was used as a tool for fortune-telling or rain-making rituals. In the Edo Period (1603-1868), people played with them at drinking parties, then in modern times it became a toy for children. Shop Name, 'Jackyu'' At the garden of the old studio his grandfather had in Kita-ward of Kyoto city, sparrows used to come and rest. His grandfather started to give them some water to drink every morning, and little by little his garden became something like a tea hut for sparrows to take a rest and have some tea, thus, he named his work studio, 'Jackyu', the resting place for sparrows, and he was called 'Jackyu-san'. Although Mr. Nakamura is currently the only one who makes Kyo Koma, he regularly visits nearby elementary schools and teaches children how to make and play with them. Who knows, some of them might become his apprentices one day and continue this tradition in the future! For your information, his works of art, Kyo Koma can be bought online here.

After we thanked Mr. Nakamura and left 'Jackyu', our mysterious guide abducted my Australian friend and took him to Osaka, to show him another 'secret' place... I hope they enjoyed finding something curious, this time in Osaka! 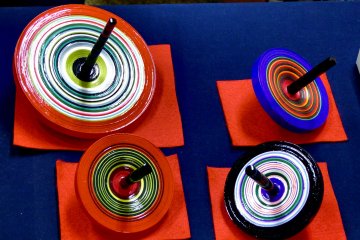 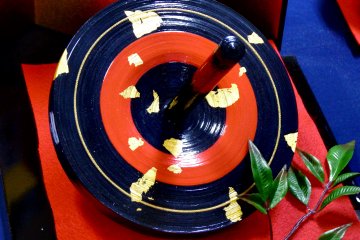 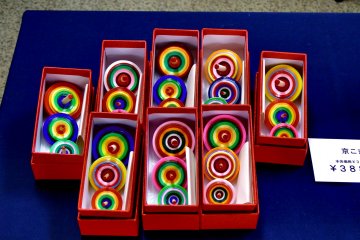 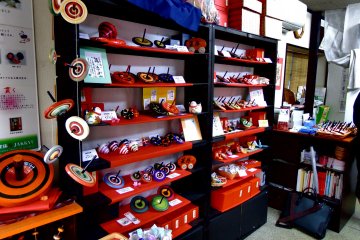