A history of Japanese cuisine in Kyoto

Sometimes you come across a Japanese word that sounds like you either can’t or don’t want to say out loud. The western part of Honshu Island, covering Kyoto and Osaka, is also called Kinki by the Japanese. Try saying that with a straight face. So when I stepped into the Omen restaurant in Kyoto, the simpleton in me thought, bad omen. Well, thankfully it was a good omen, and besides in Japanese, it is pronounced oh-men, a rhyme on the word amen.

Pronunciation lessons aside, the menu here is much easier to digest. Its speciality is a comfort food called udon, the iconic thick noodle dish that needs no introduction in the West.

Served in an earthly yet elegant bowl, the udon is bathed with a light yet delightful dashi stock, layered with shredded cabbage and bamboo shoots, and topped with super crisp soft shell prawns, which pack a punch of powerful flavors. There is no need to season it with the four different varieties of Japanese pepper, but as they are presented in such charming jars, it is hard to resist.

Trying the other dishes here is like the culinary equivalent of the Gion Matsuri. While its roots are unmistakably Japanese, many festival floats are decorated with Persian carpets and other jewels from the Silk Road. Here in Omen, you can try Nambanzuke, with morsels of battered salmon tossed with capsicums and onions, then marinated in a piquant vinegar infused broth. This is not a traditional Kyoto dish, but one adopted from the Nanban (sometimes spelt Namban), or Southerners, as they called the Portuguese who were responsible for introducing delights like tempura, a deep fried battered snack as well as castella sponge cakes in the Sixteenth Century. These days, nambanzuke is also a popular dish that is served during the new year festivities.

On the other hand, it pays to be a little bit adventurous and try some of the indigenous cuisine. The bamboo shoots entrée had the crunch of a green apple, but when topped with a Kinome (a local herb) dressing, it took on a fragrance not unlike lemongrass. The Kyoto style yudofu or soft tofu, with a sprinkling of fresh spring onion and Japanese myoga ginger had the right balance of silky smooth softness and the crunch of fresh vegetables.

Myoga is known for its sharp tasting shoots and appetizing flower buds and has a place in the chronicles of ancient Japan. In the Heian Period (794 to 1185), a traveler, burdened by the weight of several treasure chests, dropped in at an inn. A rich trader, the innkeeper thought. If I serve him lots myoga ginger, he would forget his chests and then everything would be mine. The traveler ate all the myoga and everything seemed to go to plan. The next day, he forgot something. Alas, it was not the treasure chests, but he forgot to pay when he left early in the morning. These days, you are unlikely to overdose on myoga ginger in this elegant inn. At just over ¥2,700 per person for a feast of flavors, you are more likely to forget the cost than this taste of culinary heaven.

Omen is located in one of the most picturesque parts of Kyoto, between Camellia Tea House and Yasaka Shrine, the original home of the Gion Festival. In days of old you might see weary traders stopping by these road houses, but now, the tired people are the young ladies wearing tightly wrapped kimonos for the first time, click clacking their wooden geta up the cobble stone steps to Kiyomizu Temple. 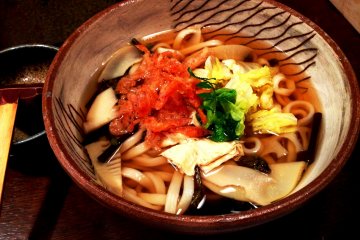 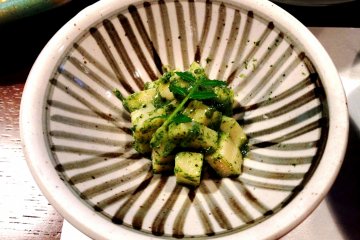 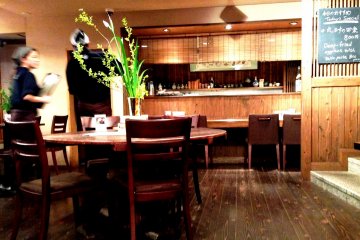 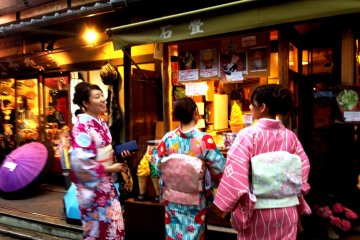 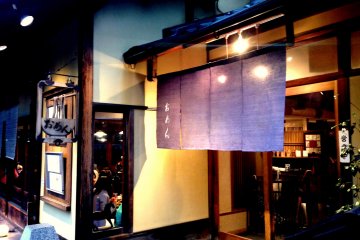 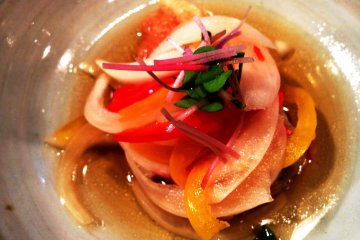