A satoyama experience in a magical valley behind Kyoto

Miyama is a rural village nestled in the mountains between Kyoto and Amanohashidate. Far from the railways and the freight roads that cross other parts of Japan, it has retained its quiet atmosphere, its charms added by the preservation of thatched houses which are now a hallmark of this village.

Like many parts of the world, there has been a movement of people and activity from rural to urban areas and Kyoto Prefecture is no different. For example, the famous washi, or Japanese handmade paper town of Kurotani, now sources its artisans from Kyoto city. The paper workshops are still there, drawn by the nearby streams with clean water that is essential for making washi. Since the 1980’s the word satoyama became a movement to reconnect with traditional ways of living in harmony with the environment. The word sato means arable land and yama means mountain, which is an apt description of Miyama, with farms and houses inhabiting the flat lands, while the forested mountains are left in pristine condition. The symbiotic relationship between man and nature means that farmers work hard to optimise their plots, as well as looking after the land from which they derive their living and thatched houses from. In villages like Kurotani and Miyama, the rediscovery of the value of living in co-existence with nature has led to a revival, one that you can see in the well maintained artisan workshops and restaurants, one of which is Saika Gallery and Café.

Take off your shoes and relax on the veranda or one of the tatami or straw matted rooms, decorated simply with a mixture of farmhouse and nostalgic elements, many of which are handmade from surrounding forests and fields. Framed by the solid wooden beams, the large windows let the breeze in and afford a panoramic view of the mountains behind you, or the village. Miyama is often compared with the larger world heritage Shirakawa-go village in Gifu prefecture, and you can replicate that experience here in a more intimate setting. These Irimoya shaped thatched houses were built in the 19th century and face the same direction.

In the cafe, the English and Japanese language menu reflects the changing seasons, and uses the local ingredients for some delicious homemade sweets and drinks, such as shiso or plum juice. The dango set (¥520) consisting of millet and mugwort mochi or rice cake dumplings, served with locally made coffee jelly topped with ice cream and the famous black bean tea makes for a divine break after a hike in the nearby countryside. Miyama is also known for its free range boar and deer, and while there is no meat on the menu here at Saika, locally foraged ingredients like berries and mushrooms are part of the joys of living here.

Once the snow starts to melt in spring, the gallery is also open with a calendar of events until late autumn. Local artists are often featured, such as poetry, water color paintings, ceramics, woodwork, and handmade bamboo accoutrements. 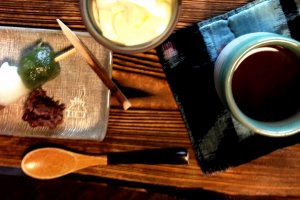 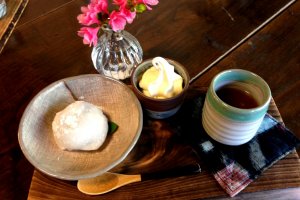 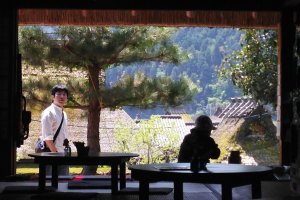 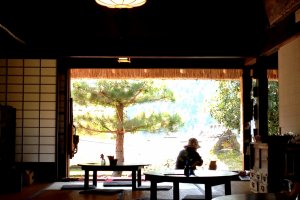 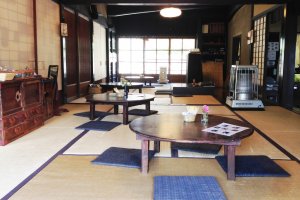 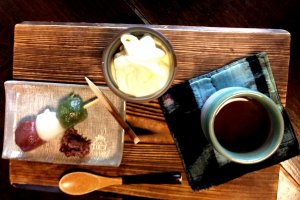