Journey to the home of the matsuri

I am on a homecoming. With me is a very important item from my wife, one that I carried on a 4000 mile journey across the oceans. It is something that I don’t understand, but I protect it in cloth, watching it every few hours like a sleeping child.

It is a temple charm, or o-mamori, from one of the oldest and most sublime shrines hidden in the woods upstream from the summer terraces on the Kamogawa.

Not knowing what powers this charm had, I was careful in not stirring its forces against me. I made my way through the vermillion orange Torii gate, with the white gravel stones crunching beneath my feet, and the odd flutter of a sparrow in the trees. I walked over to the shrine maiden, with a look on my face that was half blank and half filled with trepidation. Without a word from me, she gently asked, “okaeishi?”, or return? It was as if she knew from years of experience.

I nodded and handed the charm over. Its journey is now over, having witnessed the high and low points of my wife’s life. It may be more than five years ago since that day, but I remember it like yesterday.

It reminds me of a poem “Shinto” by Jorge Luis Borges , an excerpt is quoted below:

When sorrow lays us low for a second we are saved by humble windfalls of the mindfulness or memory: the taste of a fruit, the taste of water, that face given back to us by a dream, the first jasmine of November, the endless yearning of the compass, a book we thought was lost, the throb of a hexameter, the slight key that opens a house to us, the smell of a library, or of sandalwood, the former name of a street, the colors of a map, an unforeseen etymology, the smoothness of a filed fingernail, the date we were looking for, the twelve dark bell-strokes, tolling as we count, a sudden physical pain.”

According to Yanagita Kunio, “the Japanese have probably always believed in amulets of one type or another, but the modern printed charms now given out by shrines and temples first became popular in the Tokugawa period (1603 to 1868)” – source: Kunio, Y. (1969) Japanese Manners and Customs in the Meiji Era. Japanese Culture in the Meiji Era Tokyo, Vol. 4, p. 314- 315

The history of Shimogawa Shrine predates the history of these paper charms, and even Kyoto itself. Founded in seventh century, it found a powerful patron in the Imperial court.

The emperor’s daughter served here as a shrine maiden, its beautiful setting playing host to many a royal ceremony. One year the priests decorated the buildings with hollyhock. This was the forerunner to the Aoi Matsuri (Hollyhock Leaf Crest Festival), which blossomed throughout Japan when the Tale of Genji was written a few centuries later.

The Aoi Matsuri is one of the oldest and most celebrated festivals in Japan. So much so, the word “Matsuri” referred only to the Aoi festival. Full of pageantry, the festival transforms the usually tranquil parklands into a big costume party, with people dressed in Heian period (794–1185) court regalia parading from the Imperial Palace. Full of pomp and occasion, it culminates in the Shimagamo and Kamigamo Shrines, where the townsfolk celebrate with dancing and games, like archery competitions and horse races. It is where formality is infused with folklore and laughter.

As befitting for the home of the Aoi festival, the shrine’s architecture is reminiscent of the Heian Period, and I particularly like the round barrel shaped bridge or Taiko bashi, literally “Drum Bridge”, named after the Taiko drum. Despite its long history, its distance from the tourist spots of Gion means that it is blissfully quiet outside the festival period. One of my highlights was quietly watching a traditional wedding, with just the sound of the temple bells and of cherry blossoms floating in the breeze. It is a moment that remains in my heart.

The shrine has its own way of slowing you down to the heartbeat of nature. Like the shrine maiden before me, I walk through the “Forest of Truth”, or Tadasu no Mori to get to the shrine. This largely untouched forest is fed by both the Kamogawa and Takaongawa rivers, giving it a cool, tranquil ambience. The oldest trees date from the fifteenth century, so a sense of history and solitude envelop you the moment you step inside this sanctuary. Soak in the atmosphere. Smile. Immerse yourself in the beauty and festivity.

Find out more about Shimogamo Shrine. 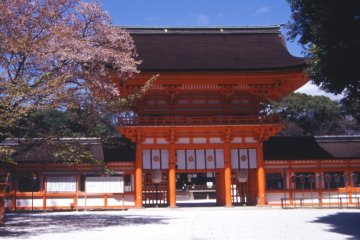 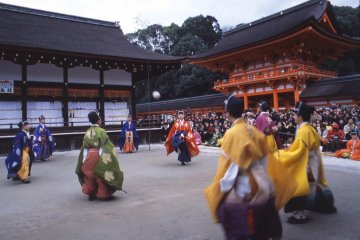 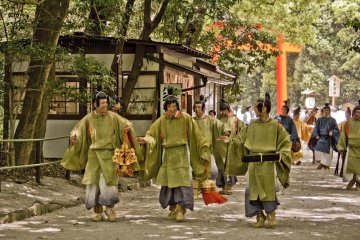