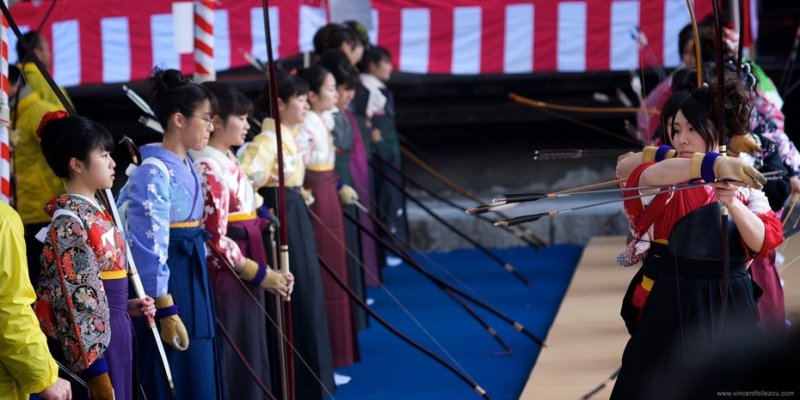 The first Japanese archery contest of the New Year

In mid-January, Sanjusangen-do Temple in Kyoto hosts this event that marks the first shooting of arrows in the New Year.

Each year around 2000 archers from all over Japan take part in this contest of archery, as well as twenty-year-old men and women who enter the contest to celebrate their entering adulthood. They compete against each other in groups of six, to shoot arrows at four targets sixty meters away, each archer having two arrows and two minutes. Archers who hit the target with both arrows go to the next round.

The contest originated in 1606, when a Samurai gave a demonstration of his archery prowess, shooting a hundred arrows in rapid succession the entire 120-meter length of the temple, hitting the target 51 times. This story inspired the annual archery contest.

Back in the 16th century the competition was a pretty extreme. Each archer shot the arrows the length of Sanjusangen-do hall, firing either 100 or 1000 arrows, known respectively as the Hyakui and Seni competitions. The most famous victor was in 1827, when an eleven-year old boy amazingly won the 1000-arrow competition, scoring 995 out of 1000. These competitions lasted 12 or 24 hours, from 6 o'clock in the evening to 6 o'clock the next day.

It is even an occasion to visit this spectacular temple, established in the 12th century. It houses 1001 carved wooden statues of Kannon, the Buddhist Goddess of Mercy, set in ranks in the main hall.

Find out more about Sanjusangendo.