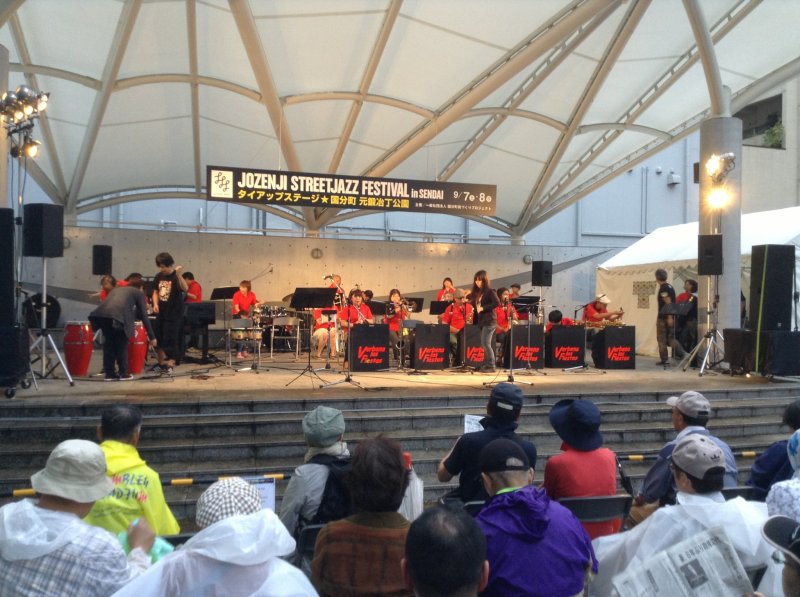 Jazz music is not everyone’s cup of green tea, so it was quite a shock to discover that the Jozenji Street Jazz Festival is one of Sendai’s biggest annual events. Starting back in 1987 on a department store stage, the festival soon moved outdoors into the streets. In recent years the growing festivities have assaulted the entire city with more than forty stages, hundreds of performers, and thousands of visitors.

And here’s a secret: all kinds of music from rock, pop, gospel, Latin (you-name-it and they’ve got it) are performed—not just jazz. It is definitely one of the most unique music festivals in Japan, and it’s all free!!!

Looking at a map of the Jozenji Street Jazz Festival can be at first a bit overwhelming. While the event is always held two days over a weekend in September and the number of stages or their locations can change slightly each year, the hardest choice of the day is where to go. Stages stretch from few and far between around Tsutsujigaoka Park (one station away from Sendai station), through the main shopping arcade and pedestrian mall, all the way down to the main stages and headquarters of Kotaikoen Park.

A long detour leads down Jozenji Street, from which the festival borrows for its name. Jozenji Street is lined with large and beautiful Zelkova trees. The street is a symbol of the city. It stretches down to Nishikoen Park which hosts a flea market and World Kitchen area to sample international cuisine. Walking the entire course would take more than an hour. If it still hasn’t sunk in yet, the festival is huge! Two days might not even be enough to enjoy it all. Of course, do try to attend bands or genres of music you are interested in, but fill in any downtime by following your ears.

Most travelers and locals get their jazz on by first starting Sendai Station. Some people opt to go see the six or so stages behind the station and clustered in Tsutsujigaoka Park. Even if it is your first time in Sendai, it isn’t hard to find your way around. The event has an army of volunteers as well as hired security guards that move you in the right direction. It won’t be long until you start hearing music. In fact, you will be hearing it all day. The stages are set just far enough apart so that one performance does not interfere with another but just close enough so that visitors never experience silence.

Smaller stages are placed along the center or edges of the covered shopping arcades (which provide great acoustics). These stages may only have one or two performers with a crowd of fewer than fifty people. It is nice knowing that a festival this large can still provide such intimate moments between musician and audience. Pass a few folk song artists and a blues performer (singing in English!) and you might hear angels. Actually, it’s a gospel choir singing from a second-floor balcony bridging over the mall walkway! This was a huge hit last year.

Next, your friend pulls your sleeve towards the blaring of a trumpet. A small stage inside a store provides perfect acoustics. You just never know where the next stage will be. It’s all part of the fun.

As the festival picks up energy the crowds get bigger and the music louder. Huge stages capable of hosting a few hundred people each center around Kotaikoen Park (located right outside Kotaikoen station, less than 10 minutes via subway from Sendai station). Even bigger performances occur during night performances which start around six in the evening. Japanese rock bands, a Japanese version of the Beatles(?), and Japanese taiko drumming kept the crowds moving until late in the evening.

The Jozenji Street Jazz Festival is something every music lover needs to attend. Although not all performers are big superstars, all are very good at what they do. Pride is on the line and all performers give their best and sound great! Fun for everyone in a beautiful backdrop of greenery along with a free price tag means it is almost impossible not to have a good time.