An authentic pizzeria in Ishinomaki is worth the trip

Have you ever been in Japan a long time and miss something that feels like home? Or maybe you remember going to your grandmother's house and having a dish especially made for you. This place gives you that kind of atmosphere. Mieko Obara is wonderful lady with a small restaurant called Kitchen Jagaimo (じゃが芋) in Ohkaidou, Ishinomaki.

From the street the restaurant looks like a little piece of history. It is just that. The restaurant has been in service for over 20 years and Mieko has been working there the entire time. One thing you will notice from the outside is a giant wood pile that sits just adjacent from the entrance. From the outside the building may look like nothing special, but you will be blown away when you venture inside.

Mieko hand makes all of the pizza and pasta dishes here. And like I hinted before, it feels like someone very close to your heart makes the food with love. From inside the restaurant Mieko works tirelessly making the dishes in the order in which they are called. Did I mention that she also speaks English very well? Many years before she and her late husband started the restaurant, she was working at a job that needed English speakers. So, if you have reservations on whether or not the restaurant will understand you, or whether they can accommodate your dietary restriction/religious observation, fear not. Mieko is a very well rounded person and is very knowledgeable. In most cases she can accommodate them. (With that said, I don't think she has her kitchen set for halal standards)

Did I mention the fact that her late husband hand-built that brick oven? Yes, he did. So if you are the kind of person that is looking for authentic flat stone, wood fired, brick oven pizza; Kitchen Jagaimo is the place to go. Keep in mind that even though most of the smoke goes out through the chimney, you do leave the restaurant like you had just got back from camping around open fire.

The above pictures are two of her most popular dishes. Her "Napolitan" spaghetti and her mixed pizza. Her Napolitan spaghetti has a red sauce with a sweet and a slightly vinegary flavor. With that said, it is amazing with all of the fresh vegetables she cooks with it. Next, her pizza in general is thin crust. Though the outer crust tends to get quite crispy, the dough under the toppings a cheese remains soft giving you a soft, and yet crunchy, thin crust. She keeps her beer and soft drinks in the fridge outside. And just when you thought it couldn't get any better, she keeps (medium) bottled Kirin Ichiban and glass bottles of Canada Dry ginger ale and Coca-Cola ice cold for her customers. She also has red wine, fresh brewed coffee, and Earl Grey tea.

Know before you go

There are a few things you should know about the restaurant before going.

The restroom/WC in the back has a Japanese style toilet. If you have qualms with using them, there is a 7-11 down the street, but it is about a 400m walk. She has menus in English and Japanese. (Her menu says that she offers large size pizzas but, they have been discontinued. She will be happy to make you 2 mediums though. They are the same price.) Mieko can only make the pizzas one at a time, and each pizza takes about 15 minutes or more. If you are there with a group, expect to stay a long time. (Though her hours say until 8:30pm, she will stay open longer for her customers.)

Sometimes people will reserve space at her restaurant. If you are coming in a group, be sure to call first and see. You can smoke cigarettes in the restaurant. Her restaurant is open Mon, Tue, Th, Fri, Sat, and Sun from 12:00pm - 8:30pm. She is closed all day on Wednesday. The fastest way to get to her restaurant by train is to get off at Rikuzen Yamashita Station in Ishinomaki and follow the road all the way until you see her sign. You know you are headed in the right direction if you see the 7-11 along the way. If you are near Ishinomaki station and don't mind a little walk (it's about a 2km walk from the station), from the main entrance you walk out and follow the main street until you come to Hwy 398, turn right on the sidewalk and follow the curve all the way down to strange little 5 way intersection (Hwy 398 and Hwy 240 intersection). There is a Nissan dealer near the corner there. Loop around the corner and follow the one way until you see a sign with the word "Kitchen" on it.

If you get lost, don't fret. There are some rather detailed descriptions on how to get there in the above video that should put your mind at ease. Kitchen Jagaimo is probably one of the best places to get pizza in all of Tohoku. I frequent this establishment and can vouch for its excellence. 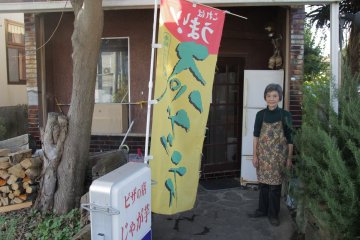 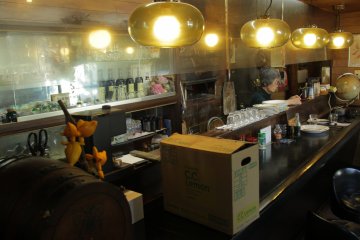 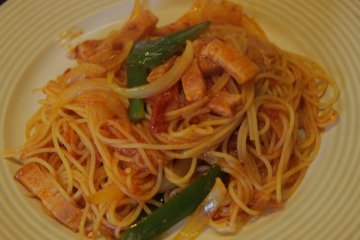