And its Beautiful Ho-O Painting

Obuse , a small town in the northern part of Nagano Prefecture hides one of the most beautiful works of Japanese art.

In order to admire it you must reach the Ganshoin temple, located approximately 2 km from Obuse station. It belongs to the Soto sect of Zen Buddhism. After its foundation, during the Muromachi period, the temple has been rebuilt three times. The temple we can see today was rebuilt one hundred and eighty years ago.

In Ganshoin you can admire a beautiful ceiling picture : "The Great Ho-O" (Phoenix Staring in eight Directions), painted by one of Japan's greatest artists Katsushika Hokusai (1760-1849) , about thirty years after the last rebuilding of Ganshoin. The painting is also known as "Ho-O Staring in eight directions" since the bird seems to stare at the viewer no matter which direction it is viewed from. Hokusai's local benefactor was a wealthy merchant named Takai Kozan who wanted to bring some of Edo's cultural cachet to Obuse. Kozan invited the artist to Obuse, building a small studio for him in the center of the town.

The Ho-O is said to be an auspicious bird that lives so long that finally various plants grown on its body. Three kind of plants are depicted into the ceiling painting. In the lower part of the painting two plantain leaves draw a triangle, that is said to be Mt Fujii, the symbol of Japan.

The painting is large — 584 x 636 cm. Direct painting was done on twelve panels of cypress wood, and, once finished, it was lifted and attached to the ceiling. The painting is masterpiece of high quality with brilliant red, green, blue, brown and gold colors.

Each year in the season of hanami (cherry blossom viewing), countless frogs appear in the small pond in the backyard of the temple for their reproduction season.

The Temple has a JPY 300 fee entrance (JPY 100 for elementary school students), and it is easily reachable from Nagano Station, as well as from Hotel Metropolitan Nagano. From Nagano station take the Nagano Dentetsu train to Tsusumi Station, Gansho-in is 18 minutes on foot from this station. 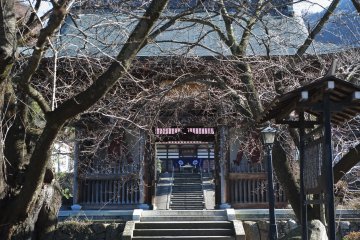 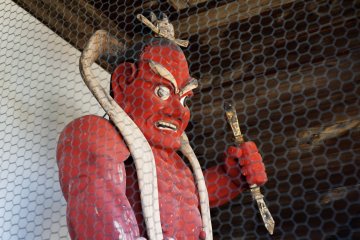 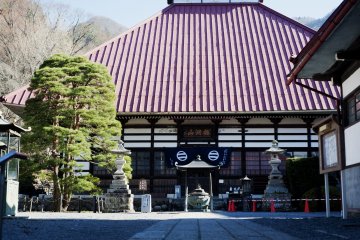 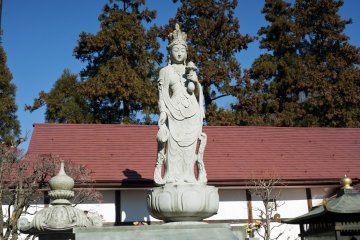 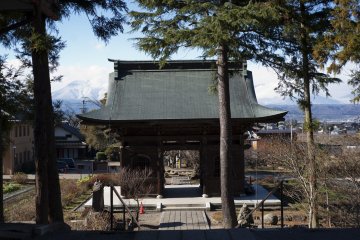 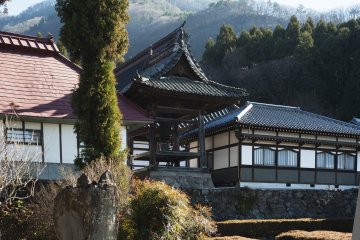