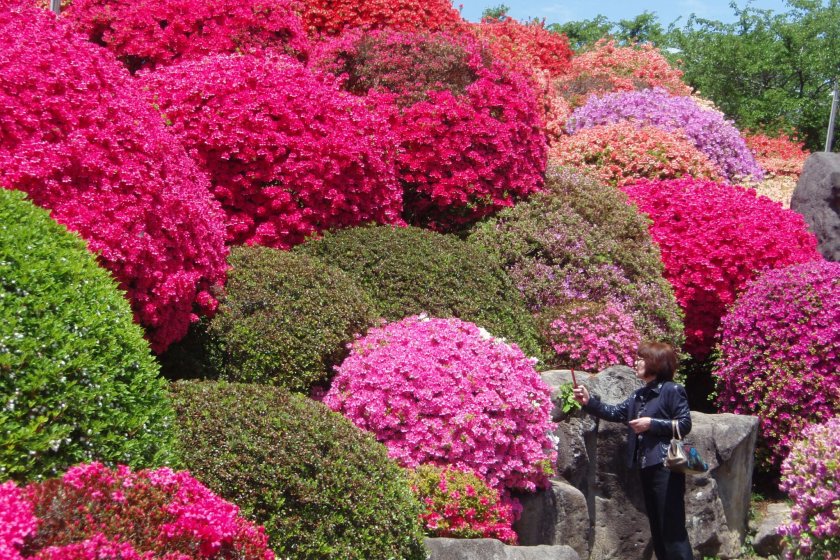 This park in Okaya is famous for its 30,000 azaleas

Tiers of azaleas at Tsurumine Park

Tsuruine Park in Okaya-shi, Nagano Prefecture, with its 30,000 azaleas is the largest azalea park in the central part of Japan.

Okaya-shi is located in the middle of Nagano, about 120 km north-west of Tokyo. The city faces the west bank of Lake Suwa, and  its altitude is about 760 meters above sea level. Its population is about 53,000.

Okaya had been known to the world as 'Silk Okaya' until the early Showa era as it had the biggest silk-reeling factories in Japan. After the World War II, chemical fibers have replaced silk and the character of Okaya City has become a land of the precision machinery industry, including products such as watches and clocks. Therefore it was called 'Switzerland of the East'. At present, the city is aiming to become a global supplier base of smart devices by applying today's precision technology.

In 1923, Kanetaro Katakura, the owner of the biggest silk-reeling factory, noticed that none of his workers had education at all, and he established a primary school for the people there. Then the village became the center of education.  In 1935, he donated 1.6 ha of land to Kawagishi Village (now Okaya City) and it was used as a park and named Tsurumine. To commemorate the donation of the land from the Katakura family, village people decided to plant 300 bushes of azaleas in the park. They asked a gardener in Angyo Village in Saitama-ken to send azaleas to Tsurumine Park. Angyo Village has been, until up to now, famous for the raising of garden trees and plants. A village man in Kawagishi ordered azaleas by showing his three fingers to mean 300 bushes, but the gardener decided that the three fingers must have meant three freight cars because the Katakuras were known as a very wealthy family.

The village people were astonished to see the azaleas  delivered by 3 freight cars, far more than 300 bushes they had expected, but there was no way to return them and all of the village people gathered together to plant them in the park. This misunderstanding led to the foundation of today's azalea park. Now the park has grown to have 30 kinds of and 30,000 bushes of azaleas and  has become the largest azalea park in the central part of Japan. The whole park is tinted with red, pink, orange, purple and white flowers until the middle of May. You will be stunned to see round shaped colorful azaleas overlapping one another on a hill-side. If you go up on the hill, you will be able to see the top of Mt. Fuji across the city of Okaya and over the Japan Alps. Tsurumine Park looks amazingly gorgeous, especially until the middle of May, but very heavy snow over 100 cm high in March 2014 caused the flowers to bloom two weeks later than usual this year. 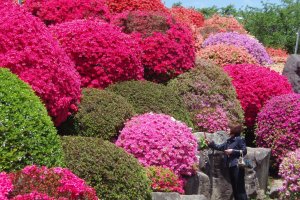 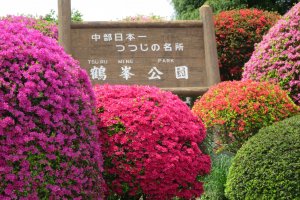 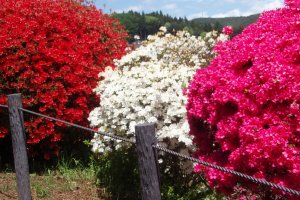 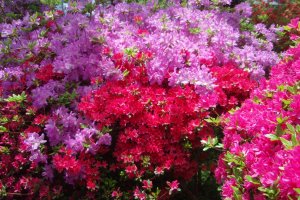 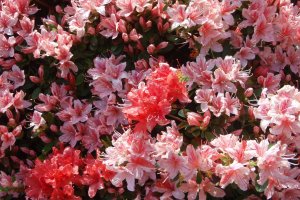 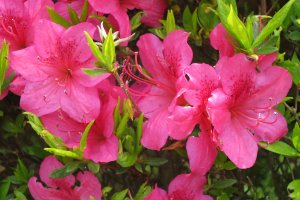