If you happen to stay at the Nara Youth Hostel, you’ll be very near one of the most charming little restaurants around, just a short stroll northward (opposite direction from the city center), on the other side of the Konoike Sports Center’s baseball stadium.

The Oranda-ya is a take-home bakery and sit-down restaurant that also offers for sale in the lobby a tempting array of varietal coffee beans and coffee-brewing equipment. It’s a relatively new shop, one of a small chain operated by the parent Fujieda coffee company. As of this writing, according to the website, there only four other Oranda-ya branded shops in operation so far.

Other than the kitschy life-size cutout of Marilyn Monroe's iconic billowed-skirt photo standing at the curb out front, everything about the Nara Oranda-ya is tastefully done. As you can see in the photos, the building looks something like a Rocky Mountain ski lodge. Rustic architecture in itself is not so unusual in Japan these days, though. What makes this place really stand out is the large parking lot in front, still a bit of an unusual sight here. Despite the spaciousness of the lot, Oranda-ya is such a popular brunch spot that it took my wife and me three tries on three separate occasions before we could finally park without having to suffer a long wait in the street out front with the engine idling.

Once you enter, you’ll see the well-stocked take-out bakery on your right, with a wide variety of breads and pastries. If you’re traveling on a tight budget, you might want to consider picking up something here to take with you for lunch, rather than hoping to find a good eating spot along the way.

Straight ahead from the front door is the cashier’s area, adjacent to a display case filled with expensive, exquisitely decorated, minuscule slivers of cake, the hallmark of any good Japanese bakery. Any of these will cost you nearly as much as the sit-down continental breakfast (the ubiquitous “morning set” in Japanese).

To your left is the coffee and coffee-brewing paraphernalia display, with the parent company’s stock in trade, coffee varietal coffee beans from around the world, and beyond you will enter the dining area, with non-smoking and smoking sections physically separated, unlike in many other Japanese restaurants. When the weather is good, the glass doors may be opened up and the terrace used for outdoor dining.

The continental breakfast ends at 11:00 pm, when the lunch menu takes effect. The lunch menu changes daily, but always includes full meal courses. At or around ¥2,000 per person, travelers on a tight budget will find lunch somewhat pricey, I think, but if you can hold out until 2:00 pm, when the pizza menu kicks in, you can eat at a more or less standard price range for Japan. The dinner menu starts at 6:00 pm and ends at 10:00.

When I first came to Japan in the mid-1970s and the currency exchange rate was ¥360 to the US dollar, 1,000 yen would buy an “approximation" of a pizza roughly the size of a tea saucer or a salad plate. Over the years, though, the value has become comparable to the US, so that now, in these days of ¥80 to the US dollar, your 1,000 yen will buy you what I would consider an honest medium size. Enjoy! 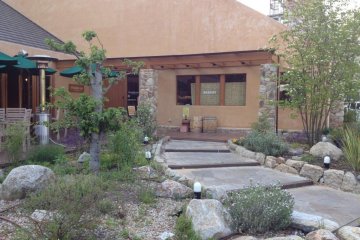 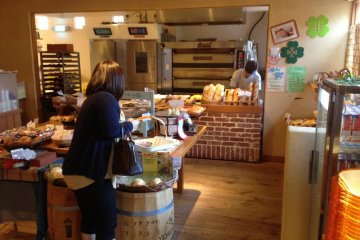 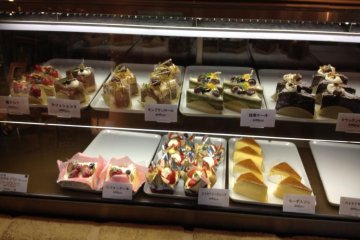 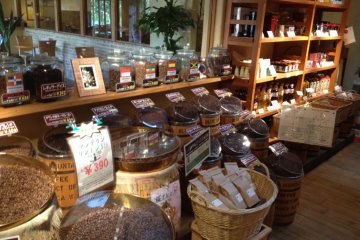 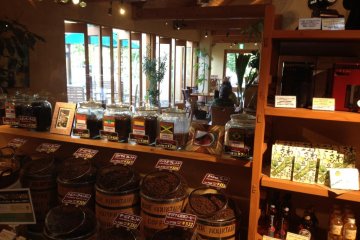 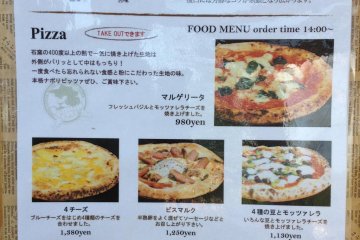