Two Shugendo monks took their disciple by the ankles and pushed him head first toward the edge of the cliff.

“Do you cherish your mother and father?” Chanted the monks.

“Yes!” Came the frightened yell from the disciple. The monks slid him further toward the edge.

“Do you care about the people around you?”

“Yes!” The disciple was inched further over the edge.

“Have you indulged in too much alcohol and playing around with women?” The monks inched the disciple further over the cliff even before he screamed out, “Yes!” “What was that?” asked the monks edging him further over the edge. “We couldn’t hear you.” If it weren’t for the rope around the disciple’s shoulders and a third person holding the other end of the rope to make sure that he didn’t fall it would have been the perfect realization of a mafia film.

Mt. Omine is one of the highest mountains in Nara Prefecture, at 1,719 meters or 5,640 feet, and perhaps the holiest place in the Shugendo Buddhist faith. Ominesanji Temple, at the summit of the mountain, is one of the headquarters of Shugendo and one of its most important temples. It was founded in the 8th century by En no Gyoja (the creator of Shugendo) and is home to several holy statues and relics that are only displayed once or twice a year. Hundreds (if not thousands) of practitioners of Shugendo make the pilgrimage to Mt. Omine and Ominesanji Temple every year to test and prove their faith. Climbing Mt. Omine is not exclusively for those practicing Shugendo though, the average man is welcome to climb as well.

“It’s not about discrimination,” explained the monk who led my expedition when I questioned him about the “No Women Admitted” sign. “In the past, this was a dangerous mountain with bears, rock falls and other hazards. People still die on this mountain today. The ‘ban’ is there to protect women in the way you would want to protect your mother or sister or wife from danger. It also exists so that we do not get distracted from our practice. And Mt. Inamura is for women only. Men are not allowed to enter or practice Shugendo there.” Mt. Omine is the last place in Japan to have such a ban in place. The ban is, however, voluntary and has been breached multiple times with no consequence besides a request from Ominesanji Temple for those who committed the breach to be more respectful of the temple’s religious practices in the future.

The shortest route to the summit of Mt. Omine and Ominesanji Temple is via a 6km long hiking trail that begins a few kilometers above the town of Dorogawa Onsen. The trail ascends gently through cedar plantations and old growth forests on its way to the mountain ridge and the summit. It’s an easy ascent and the clouds and fog on the day that I made my ascent of Mt. Omine contributed to the mysterious and holy nature of the Shugendo practice. Large open tea houses are dotted along trail allowing climbers to have a drink and a rest along their journey. Monuments like statues of En no Gyoja and Fudomyo-sama, the Buddhist deity of discipline, are found near the tea houses and elsewhere along the route and require either a respectful bow and prayer of acknowledgement or a longer, in-depth chant by trained monks.

Near the summit the trail splits. The right fork is for descending the mountain or for those not wishing to engage in Shugendo’s most rigorous practices. The left fork is the way to the three “tests of courage.” The climb to the first of the three tests is a test in and of itself for anyone not familiar with climbing mountains. The mountain slope is very steep and requires climbers to use chains to climb near vertical rock walls. At the top of these near vertical rock walls is the “Kane Kane Iwa,” the Hanging Stone or Crab Rock, the first test of courage: a 30-foot climb up a rock wall. The last bit involves climbing over an overhanging stone. Looking back on the experience, it was easier than some climbing walls I’ve been on, but when I was on the cliff surrounded by clouds and fog with the hard rock of the cliff below, psyching myself up to put my right leg up onto the foothold that would allow me to climb the rest of the way up the cliff was a moment of fear and uncertainty. Reaching the top of the Kane Kane Iwa, the true summit of Mt. Omine, was a great feeling. With only two or three higher mountains in the area, on a clear day it commands a view that stretches all the way to Kobe City two prefectures away.

The second test of courage, a short chain descent and easy walk away from the Kane Kane Iwa, is the Nishi no Nozoki Cliff. It is here that first time visitors to Mt. Omine are held over the edge of the 200 foot high cliff, compelled to admit their faults and state their assertion to return to practice again. A strong rope that loops over both shoulders is held by a third member of the party to insure that no one falls. I subjected myself to the practice as well but with four bungee jumps under my belt (and the knowledge that the monks didn’t want headlines trumpeting my death) it was nowhere near as life changing for me as it was for the three novices who accompanied me on the climb.

The third test of courage is called the Byodo Iwa, Stone of Equality, and is practiced by special request only. My group did not go to the Byodo Iwa, but it is a rock spire overlooking a cliff with several projections that allow people to traverse from one side to the other.

Once past the tests of courage it is an easy walk to the main shukubo lodging and dining hall (where visitors will be served tea and miso soup) and the main hall of Ominesanji. I enjoyed the climb up Mt. Omine and the fantastic and mysterious atmosphere the clouds and fog brought to the hike. I will be coming back on a clear day to take in the immense views. Ever climbed a holy mountain? Happy travels! 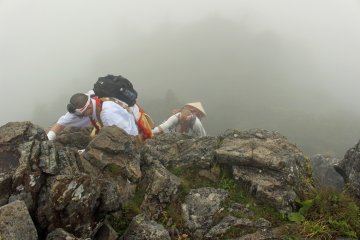 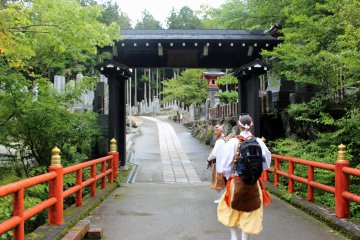 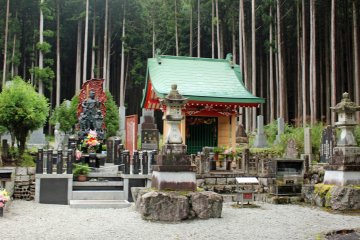 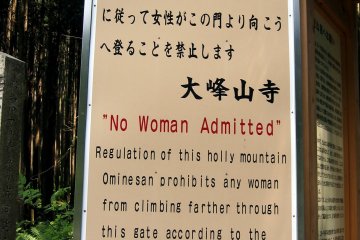 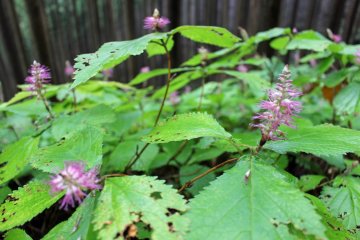 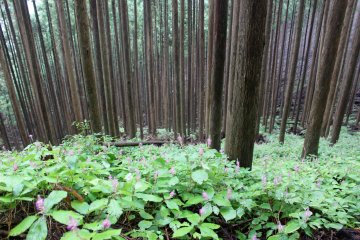 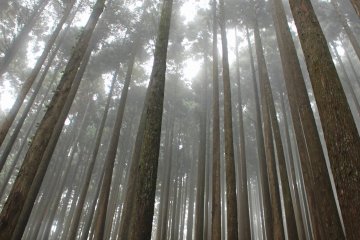 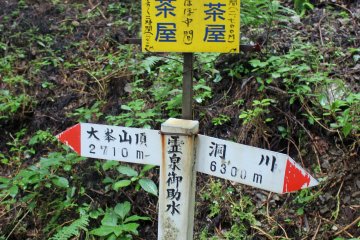 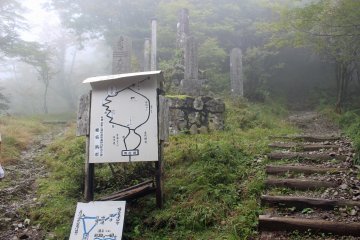 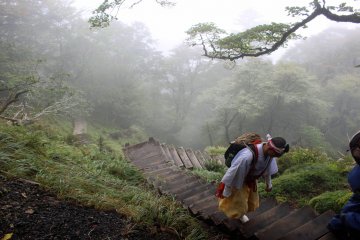 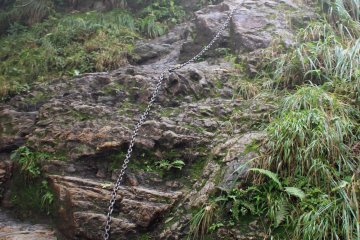 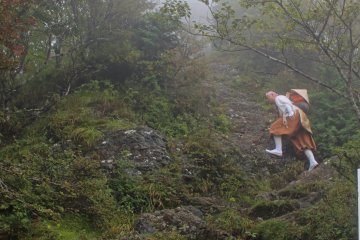 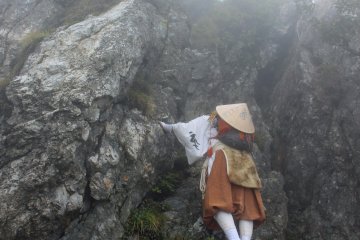 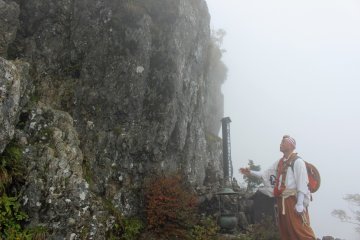 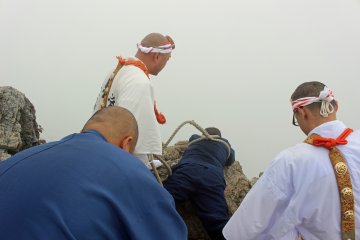 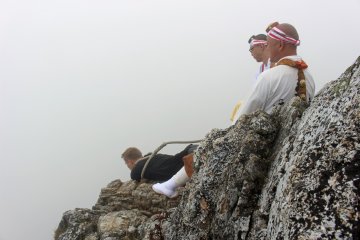 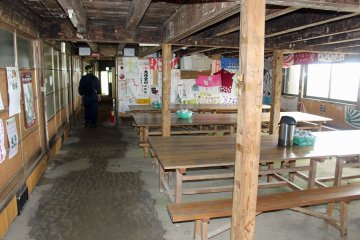 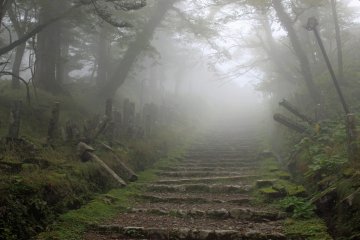 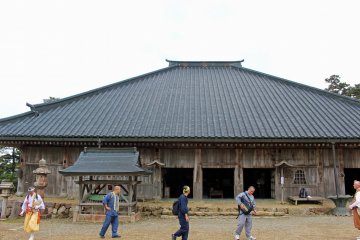 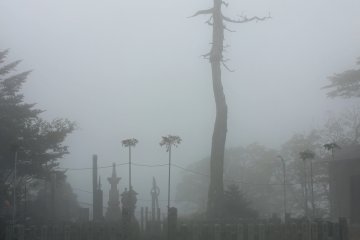 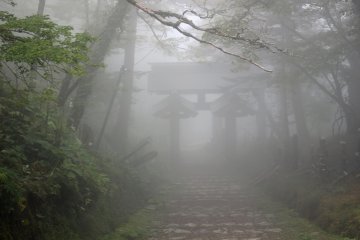 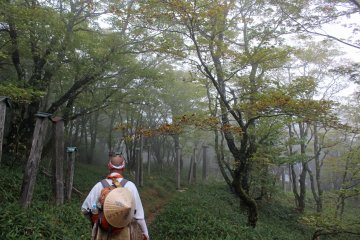 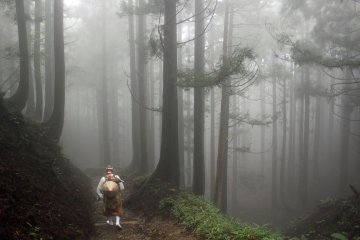