One of the seven great temples in Nara

Saidaiji (the Great Western Temple) is one of the seven great temples in Nara, and was mentioned in the Tales of Genji It was originally founded in 745 A.D. and originally consisted of over one hundred buildings but due to fires etc during the Heian period (794AD to 1185AD)  many of the buildings were destroyed and it was temporarily abandoned. It serves as a counterpart to the better-known Todaiji (the Great Eastern temple) in Nara and is the main temple of Shingon Risshu a sect of Buddhism after the temple’s founder, Eison, took over the temple’s administration in 1238. It was Eison who erected the main image of Shakyamuni Buddha, in the main hall in 1249. Visiting Saidaiji is best done in the mid afternoon when the sun is low in the sky and casting mellow light and shadows around the temple grounds.

The Aizen-do houses a statue of the small but fierce Aizen-Myo. This is a particularly fine treasure within Saidaiji and is a major reason for Japanese visitors to come and visit. Aizen is said to be the guardian of Japan against foreign invasion and therefore has a special meaning to the followers of Buddhism. Entry to the Shiodo hall is 300 yen and the main hall also houses a wooden statue, Shaka Nyorai Shitsuzo.

Saidaiji Temple lost its power during the Kamakura Period from 1192 to 1333.  One can almost go back in time and get a feel for what it was like nine hundred years ago when Saidaiji temple complex was at its peak of its influence. In particular take a look at the rake of the rooves and the exquisite tiling. Unlike some of the other great temples, Saidaiji still retains a mass of wood in its construction making it look more authentic and aesthetic. In fact, the main buildings were lost in a fire in 1502 but were rebuilt during the Edo period, sometime before 1856.

Located close to the busy Yamato-Saidaiji station, Saidaiji temple has a very quiet atmosphere once inside the temple walls. Located close to the busy Yamato Saidaiji station it is but a short three-minute walk from the station.  As you approach the entrance, the massive walls surrounding the temple complex  rises up before you and gives you an idea of its immense size. You first enter the car park, which on weekends will be crammed with up to 200 cars, and be careful of the tour buses that navigate the surrounding one-lane streets. Entry to the temple grounds are free but as mentioned, an admission fee  is required to enter some of the buildings. You can buy tickets to enter individual buildings but I recommend you buy a concession ticket, where for one price you can enter all four of the buildings using one ticket.  To get a bird’s eye view of the Temple you can visit this site and see various paintings drawn of Saidaiji Temple.

Saidaiji Temple is also famous for its tea ceremony where for a small  charge you can drink tea from a large tea bowl. You will probably need the assistance of people sitting next to you in order to hold the bowl which is 30 cm in diameter. As well as green tea (matcha) an explanation of the ceremony is provided as well as some traditional confectionery, usually Japanese sweets (wagashi). The tea ceremony has been practiced since 1239 A.D. and the surroundings offer a harmonious and serene atmosphere. I believe it is a unique experience that one should participate in if given the chance. Prior reservations are required for the tea ceremony and it costs at least 1,000 yen. At least one hour is required for taking part. Up to thirty people can participate at one time can be accommodated in the tea hall but ceremonies for individuals are not possible.

During the summer months Saidiji temple hosts summer dance festivals for local residents and food stalls are set up in the temple grounds. During New Year season if you go to the temple at midnight you can see many people lining up in front of the main hall so they can pray for good luck and make monetary offerings. You will often see Japanese throw money into the box provided, ring the large bell and clap their hands together as they pray to the Gods within the temple. 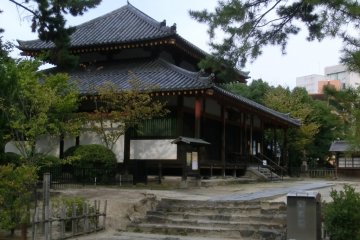 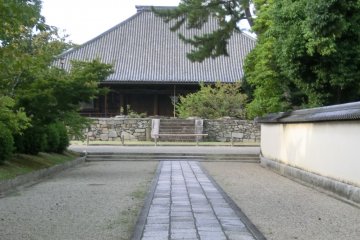 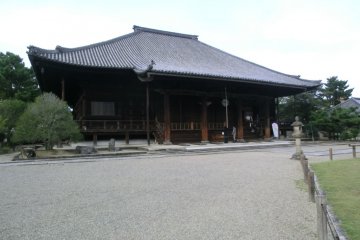 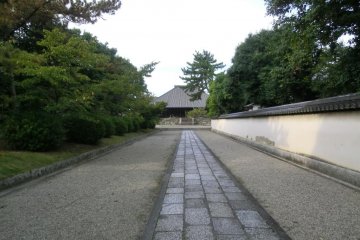