Arriving and traveling in Japan is an experience in overwhelm, much of which (the bright lights, crazy fashions, riding the bullet train, seeing Mt. Fuji) is very exciting, but trying to narrow down and plan out one’s day from the flood of literature, internet searches and suggestions from other travelers can be dizzying. “Regular Sightseeing Bus” tours put on by Nara Kotsu are an efficient, cost effective and easy way to cut out the overwhelm of planning, and leave you overwhelmed by the excitement of traveling Japan.

Nara Kotsu offers several “Regular Sightseeing Bus” tours throughout Nara Prefecture. Four tours in Nara City are available in English via an audio guide and multilingual pamphlets (aside from some non-native word choice and the odd missing article, the pamphlets are helpful and easy to understand). The Nishinokyo Yu-Yu Bus Line half-day afternoon tour visits Toshodaiji and Yakushiji Temples, with a drive-by of the Suzakumon Palace Gate at a cost of ￥2,500 (~$25US) for adults and ￥1,060 (~$10US) for children; temple entry is included in the ticket price. Reservations can be made online in English (https://www.narakotsu.co.jp/language/en/) or at the ticket windows inside JR Nara Station (just outside the ticket gates) or Kintetsu Nara Station (across the street from the glass Kintetsu Station building on the first floor of the Nara Line House).

At 1:55pm the white and orange Nara Kotsu bus arrived at the number 4 bus stop outside JR Nara Station. The gracious (but non-English speaking) staff welcomed me warmly and, after the bus made its 2pm pick up at Kintetsu Nara Station, I was given my audio guide and headphones. The audio guide is synched to a GPS and plays interesting lectures about the various places that the bus passes on its way to the shrines.

The bus arrived first at Toshodaiji, a World Heritage site with a history going back to the 8th century. The audio guide’s GPS synched lectures change to individual lectures about the sites of the temple that visitors can choose to (or not to) listen to as they explore. Especially impressive to me was learning that the Kondo Hall, the main building, dates back more than 1200 years and that the two original “shibi,” a decorative sculpture of a mythical fish placed on the roof to protect the temple from fire (one dating from the 8th century and the other from the 14th), are still extant today and were only replaced and preserved during a renovation in 2009. They are now on display at the Shin-Toshodaiji Treasure Museum.

The guide let us have close to free reign at Toshodaiji, telling us only what time we had to be back at the bus, pointing out the most significant buildings or sites or directing us to the best angles for photographs. I did not ever feel that I was rushed.

When our more than adequate time at Toshodaiji was up, we moved to Yakushiji Temple, the home of the “Medicine Buddha.” Yakushiji is one of the 7 great temples of Nara commissioned by Emperor Temmu in the 7th century, and the headquarters of the Hosso School of Buddhism. It’s best known for its east and west pagodas. The East Pagoda (the Tou-to) is the only surviving 8th century structure at Yakushiji (fires in the 10th and 15th century destroyed the rest of the temple). At present, the east pagoda is undergoing restoration work, to be completed in 2018, and is surrounded by a scaffolding tent. This did not detract much from my enjoyment of Yakushiji. Being an active and practicing school of Buddhism granted the opportunity to see the priests engaging in the daily aspects of temple life.

After leaving Yakushi Temple the bus made a brief stop at the Suzakumon Palace Gate, a reconstruction of the original palace gate at Nara Heijokyo Palace, the seat of government during the Nara Era. We weren’t allowed off the bus but the view of the gate was good.

Nara Kotsu has three other “Regular Sightseeing Bus” tours offered in English in Nara city and has plans to expand the English service to its other tours elsewhere in Nara. I’m looking forward to trying the tours in Asuka and Yoshino. Nara Kotsu’s bus tours cut out the stress of planning and allow visitors to Nara to sit back, learn, let someone else do the driving and enjoy... Happy travels! 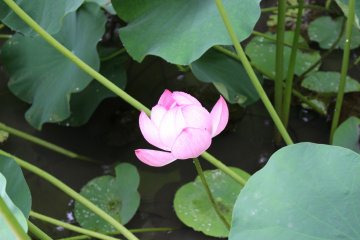 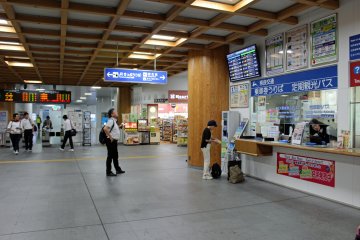 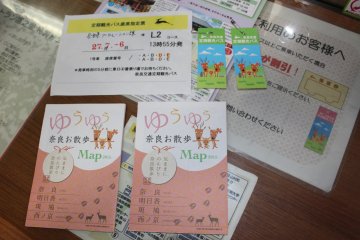 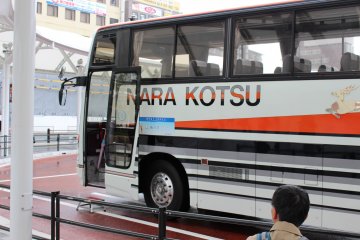 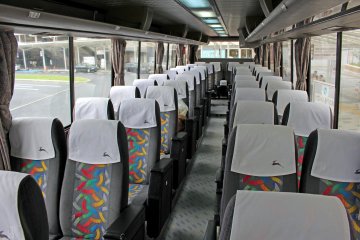 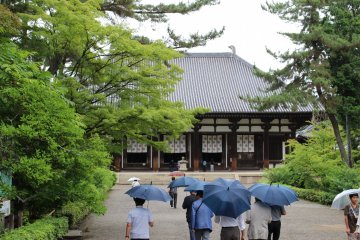 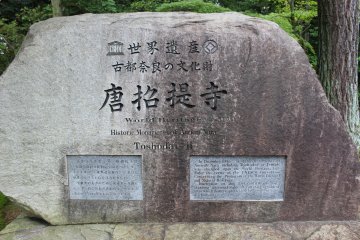 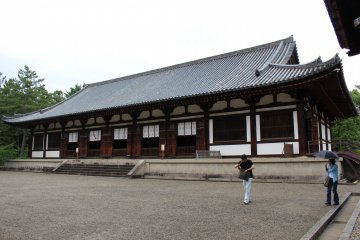 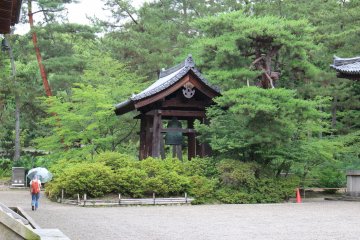 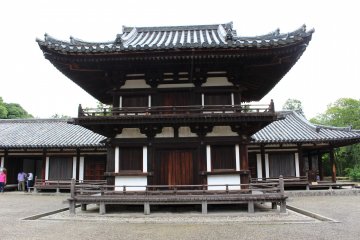 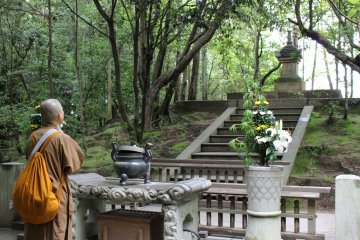 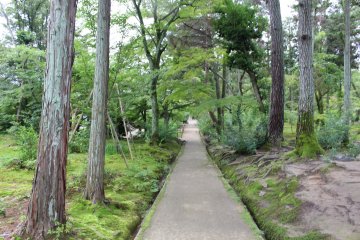 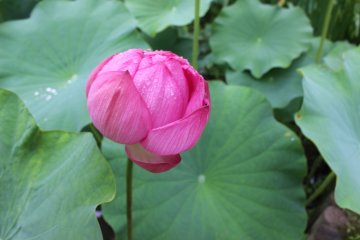 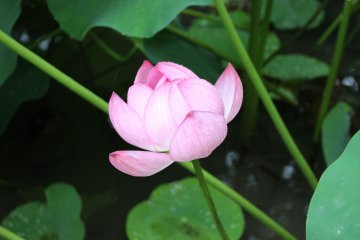 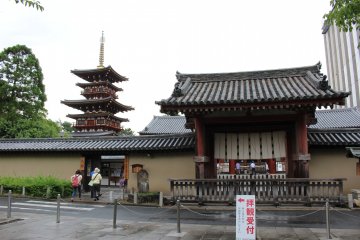 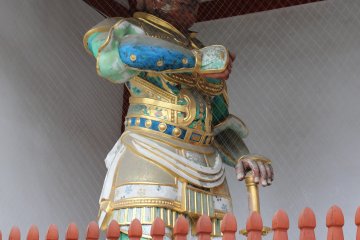 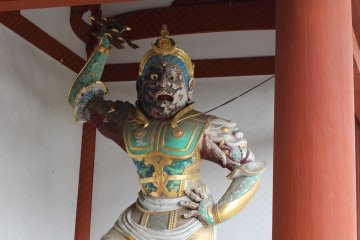 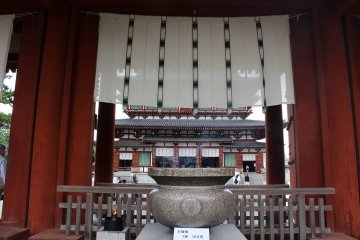 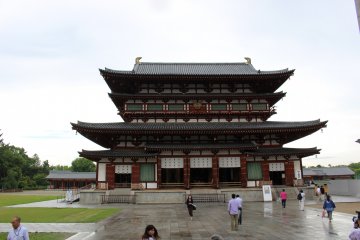 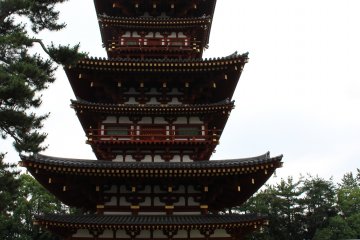 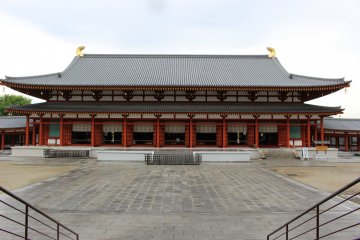 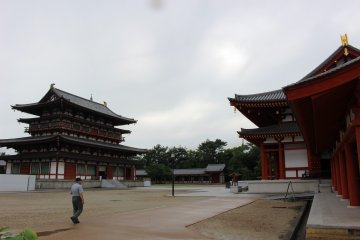 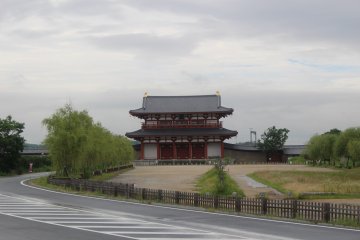