Backdrop to your own Japan adventure movie

A light breeze blew down the valley over the Totsukawa River relieving the heat of the blazing summer weather. Underfoot the wooden planks of the Tanize suspension bridge bent, creaked and moved up and down along the iron staples securing them to the support beams. A sudden crack heralded a board giving way beneath my feet and only the narrowness of the hole in the bridge prevented me plummeting 54 meters to the river below… or so dictates the Hollywood adventure movie cliché. But this isn’t Hollywood it’s safety conscious Japan, where adventure seeking visitors and fear-conquering acrophobes can get their Indy Jones on peril free.

Totsukawa-mura is the largest village in Japan by area occupying the 672 square kilometer area of southern Nara Prefecture. Some of the tallest and most rugged peaks of the Kii Mountains make up the entirety of its area eliminating any possibility of large scale development. The area is as wild and unsullied as modern Japan gets. An outdoorsman’s paradise.

My first stop in Totsukawa-mura was what is likely its most well-known site, the Tanize no Tsuribashi, a pedestrian only cable suspension bridge with wooden planks for a walkway. It looks exactly something out of an Indiana Jones movie. The Tanize no Tsuribashi was built in 1954 to facilitate the flow of mail, goods and people to and from developments on either side of the river. It is the longest continuously operating suspension bridge in Japan with a length of 297.7 meters (976 feet) and a river to walkway height of 54 meters (177 feet). Mailmen and other postal personnel are allowed to ride light weight motorcycles across the bridge but for everyone else, one’s own two feet are the only way across. That’s too much even for some people who aren’t even able to bring themselves to walk more than a few meters onto the bridge. Braving the crossing rewards with beautiful views and the aforementioned heat beating breezes, and it’s not nearly as nerve wracking as the bridge’s adventure movie appearance suggests. The bridge is well maintained and hardly sways at all (I was crazy enough to try to make it swing), and it has fairly high handrails with a tough wire mesh to prevent falls. Many visitors feel secure enough to put a camera over the edge for that one perfect shot.

The Subaru no Sato Onsen is the site of another “out of National Geographic” attraction that’s unique to Totsukawa-mura, the Yaen: a wooden cable car relying on gravity and the arm and shoulder strength of the one rider it can carry to cross a part of a river bank. This mine cart on sky cables is best enjoyed with gloves (to prevent blisters), and is worth coming to try. Challenge your friends and family to cross the river in less time than you or just head out over the river to enjoy the scenery. The landscape around the Subaru no Sato is stunning, especially at sunset.

Near the summit of Mt. Tamaki at an elevation of 1,076 meters (3,529 feet) sits Tamaki Shrine, the innermost sanctuary of the three main shrines of the World Heritage Kumano Kodo Pilgrimage route. I was staggered to learn that the temple was founded in the year 37BC! There were no buildings back then, but the location atop the mountain amid a forest of giant cedar trees (some approaching 3,000 years in age) attracted early Shinto priests because they believed it was closer to the spirit world, and that the giant trees and rocks were places that the gods could be invited to take up residence and commune with people in this world. For upward of 1,000 years, before the birth of the Japanese empire, Shinto and Shugendo (ascetic mountain and nature worshipers) made their way on foot from the coast in present day Mie Prefecture to Tamaki Shrine in their quest for enlightenment. The paths they traversed are still in place today. Up until about 40 years ago, hiking was the only way to reach Tamaki Shrine. One can now drive to a parking lot 20 minutes-walk from Tamaki Shrine. Even with a modern road and car, the wildness of the landscape and the power of the location remains as it was. If ever there was a location to match the beauty and wildness portrayed within films like Princess Mononoke, Mt. Tamaki and Tamaki Shrine are it.

South of Tamaki Shrine at the very bottom of Nara Prefecture is a rare and interesting place, the trilateral border of Nara, Mie and Wakayama Prefectures. They all meet at one spot in the middle of a river in the Dorokyo Gorge. The Dorokyo is a 31km long gorge carved out of the Kii Mountains by the deep blue waters of the Kitayama River. A small private boat called the Kawasemi or a large jet boat can take visitors on a tour of the area. The Kawasemi can do guest customized tours of any length of time desired allowing visitors the chance to take their time to enjoy the scenery, experience the thrill of shooting some rapids, or the opportunity to jump in and enjoy the water on a hot day (ask the driver about safe places to do this). It’s the best way to enjoy the Grand Canyon of the Kitayama.

Finally, after enjoying a day of outdoor adventures there’s nothing better than soaking in one of Totsukawa-mura’s many hot springs. I chose to have a soak in the sulfuric waters of Taki no Yu hot springs (near the village office) because the outdoor bath overlooks a small waterfall in the woods. A sound decision indeed.

Totsukawa-mura is one of the most remote areas on Honshu, Japan’s main island. It’s best accessed by car or by the Nara Kotsu Express Bus from Kintetsu Yamato Yagi Station. Visitors who stay at least one night in the area will get their bus fare refunded by Nara Prefecture! Visitors pay cash for the outgoing bus ride and ask for a “josha shomeisho” (proof of ride ticket) from the bus driver. At the end of their stay visitors present the josha shomeisho to their hotel or ryokan when they check out and receive a cash refund of the outgoing bus fare and a ticket for free return fare! With shrines from before Christ, boat rides in grand canyons, rickety-looking suspension bridges and unsullied nature Totsukawa-mura is an Indy Jones movie come to life. What will your adventure look like? Happy Travels! 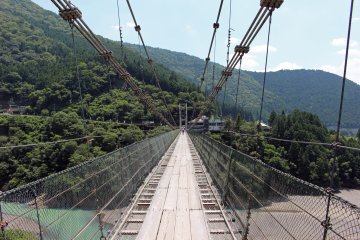 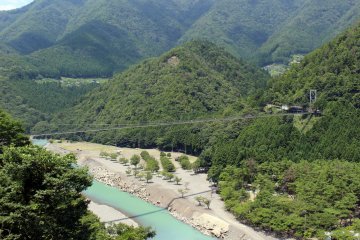 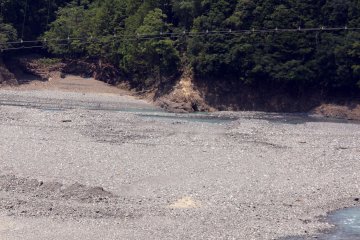 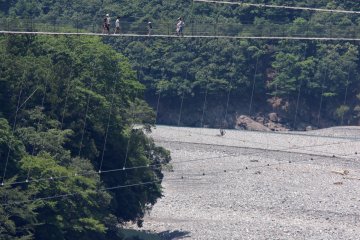 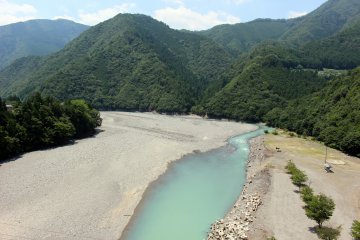 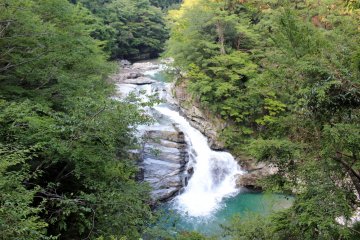 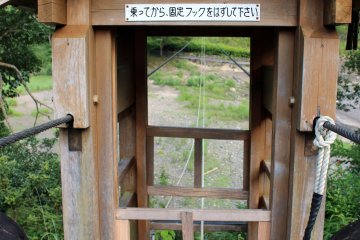 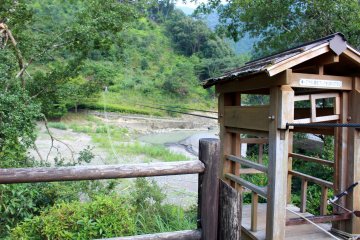 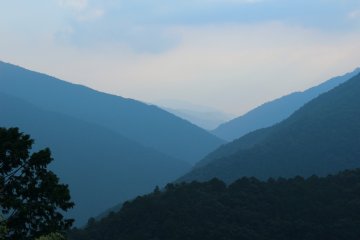 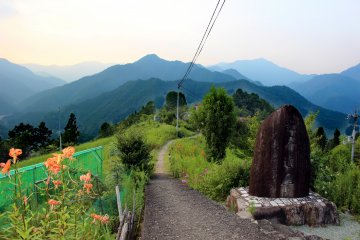 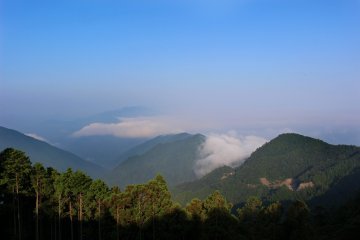 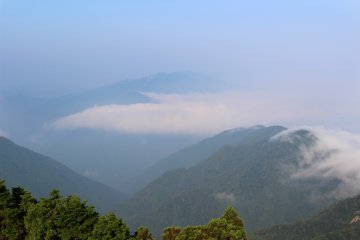 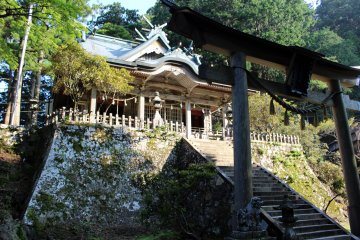 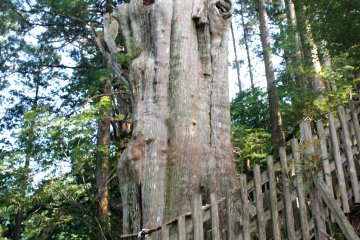 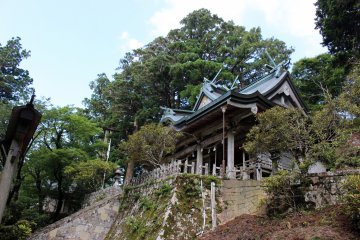 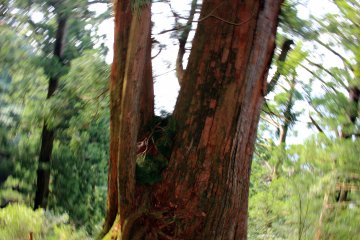 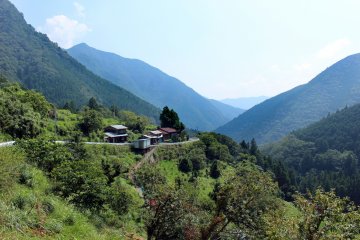 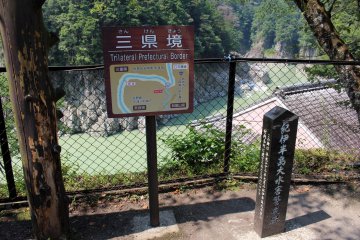 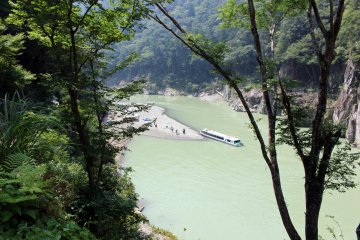 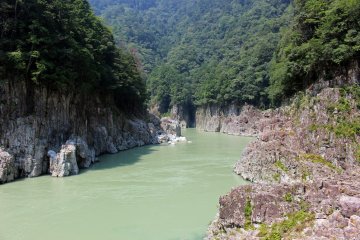 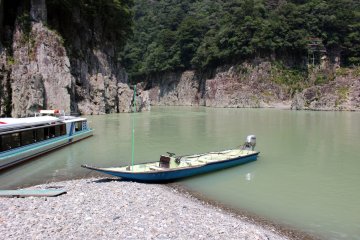 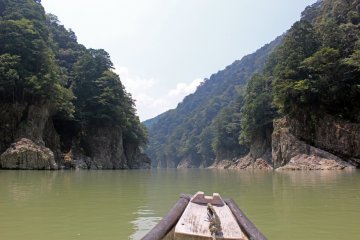 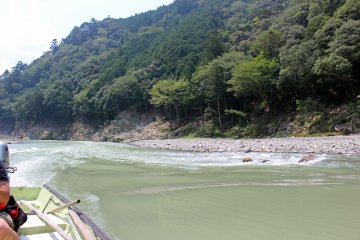 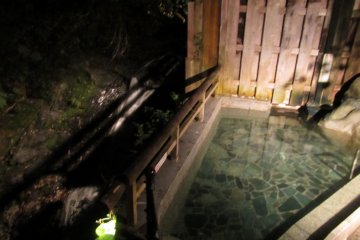 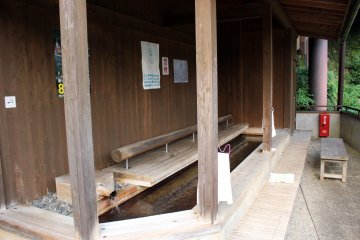 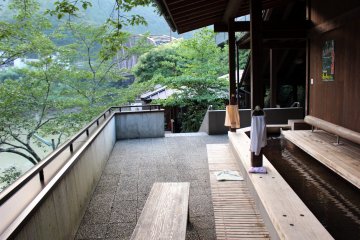