It's an unwritten rule that it's okay to doze off in the middle of a noh play. It's tedious work to watch nothing and expect to be entertained, right? And yes, there is a lot of nothing in a noh play. Right? Sure. If you've been groomed to expect fireworks every five minutes. That still doesn't really answer the question that almost everyone asks, "Why?" Why watch something where almost nothing is happening?

In the case of noh, putting much into it doesn't mean drilling yourself over studying classical Japanese grammar or literature. But if language is your thing, then there's your entry into noh. Nor do you have to care much for its elaborate costumes. Though, if you are into textiles, fashion and colour, then there's your window.

What if you like singing in the shower? Or humming a favourite tune or tapping a beat on the table? Perhaps you appreciate the moonwalk. Well then, if any of these things get a tick, then noh may just be just down your alley. A penchant for mythology or psychology? Woah, hold on. Could that be... no way, could noh theatre satisfy that craving too?

And the masks. One mustn't forget noh's masks. A woodworker's dream perhaps or an artisan's soul? Who knows? Just like each of the elements that make up noh, these most symbolic of noh's charms can be appreciated solely for what they are.

The next time you watch a noh performance, be it in the stylised, modern comfort of Tokyo's National Noh Theatre or outdoors during a rustic night lit by burning bonfires on Sado Island, your enjoyment of it is entirely up to you. Even if you do sleep it off trying to work out how. 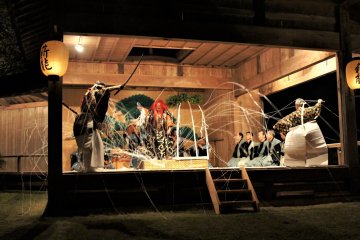