The winding mountain roads between Yufuin and Nakatsu in Oita prefecture hide many sites not listed in any guidebooks - ancient Buddhas carved into cliff walls, five-storied pagodas attached to long-forgotten temples and numerous waterfalls tumbling into rushing streams.

One such waterfall is the Higashi-Shiiya Waterfall. Located a half hour drive south of Usa city, this waterfall is considered to be the Kegon Falls of Kyushu. (Kegon Falls near Nikko is one of Japan's most impressive and well-known cascades.) Higashi Shiiya Falls itself is also considered one of the top 100 waterfalls in Japan, though garners much less attention and significantly fewer tourists. The water here tumbles 85 meters from the top of the cliff to a sizable pool below before rushing onward into a leafy valley.

In the spring, the area is the breeding ground of Kajika frogs. In the autumn, the numerous maple trees that line the trail turn crimson in color. Despite the natural beauty, the path is rarely crowded and on weekdays, you might have the waterfall entirely to yourself. No matter the season, visitors should keep their eyes peeled for the Giant Japanese Blue Earthworm. Also known as the Seibold Worm, you would be hard-pressed to miss this electric blue earthworm that can grow up to 40 centimeters long. On my short hike to the falls the other day, I saw at least a half dozen of these brilliantly-colored creatures.

The waterfall is only reached on foot via a short trail. The path is mostly flat, save for a stone staircase at the beginning of the trail and a bit of rock scrambling near the waterfall itself. Even on dry days, the trail to the falls can be fairly slick. While the trail itself is short, there are several places where it runs quite close to the strong current of the stream and those with children should pay extra attention.

The closest bus stop to the falls is about 2 kilometers away, so private transportation is the best mode of transport for reaching Higashi Shiiya. However, taxis from nearby Usa city will also make the trip down to the falls. For drivers, there is ample parking at the trailhead. While signed fairly well in English, it doesn't hurt to be able to read Japanese so you don't miss the final turn-off. 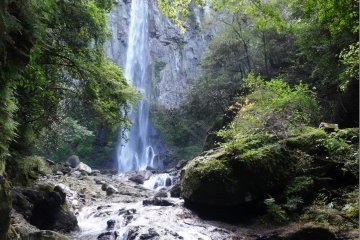 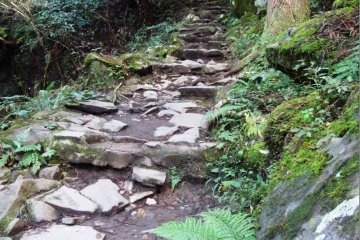 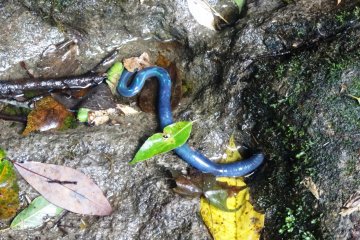