An Ode to Tora-san

Ever notice how so many travel stories describe the ‘perfect getaway’? Delectable meals, blissful sunsets, an outdoor bath with a killer view… I admit it. I, too, usually omit the other stuff – the tourist traps, the sub-par service, the miscues. In defense of the travel blogger, the downside doesn’t make for great photos. (And it’s all about the photos, right?)

Well, rather than omit this one, I’ll let you have it, bad photos and all.

On my most recent excursion to Oita prefecture – one of Japan’s most spectacular and inviting regions, really – during a glorious stretch of spring weather, I decided to visit a place I had seen just once before, too many years ago to mention.

Long ago and far away

The little hot spring village of Yunohira, tucked away in the highlands above the famous resort of Yufuin, was a kind of Brigadoon of my younger days in Japan. I had been there within just weeks of my landing – we were sightseeing by car, just stopping for a bath – but my hosts had picked it for a reason. Yunohira had appeared briefly in the most recent edition of the Tora-san movie series about an eponymous vagabond, kind of heart but unlucky in love. Otoko wa Tsuraiyo; The Expert, the installment starring rocker Sawada Kenji and the irresistibly cute Tanako Yuko, had given the hamlet – in fact, the whole of Oita prefecture – a fleeting brush with celebrity.

It meant little to me at the time. All I remembered in later years was a few hot spring bathhouses over a narrow cobblestone street, and an endless, cobalt sky.

The ride alone is worth it

Not having much time, and calculating a pinpoint strike and return, I cut a straight line through spanking new Oita station, knapsack over my shoulder, heading for platform of the outbound Kyudai line. As expected, the local train didn’t keep me waiting. And what a train! Unlike the Yufuin Express, or the luxurious YufunoMori, which traveled the same tracks, what arrived was a single car diesel electric coach, the driver seated in a vestibule in front. No pretty conductress on this wagon!

As it rumbled out of the station, I saw that just about every bench was full, but no one was standing. My fellow riders were mostly uniformed school boys and girls, with a few housewives and elderly ladies thrown in. Unlike the old days, when a big gaijin (foreign oaf) stuck out like a sore thumb, no one even glanced at me, much less stared, pointed or giggled.

My celebrity years are so gone!

As the railcar plowed up the rugged, sparkling valley it made frequent stops. No one boarded, and soon the coach was nearly empty. The runs began to stretch out, the towns giving way to the thickly forested slopes and plunging valley. Swaying gently, pulling firmly, the little coach wended deeper into the uplands of eastern Kyushu.

After about an hour, as my destination neared, I began to feel giddy. The day was perfect, and I was about to nail a quick dip in a hot spring Shangri-la!

The coach hissed to a stop, and the doors slid opened. I stepped outside, feeling that fresh air and warm sun on my neck.

I stood alone on the platform, and immediately knew that something was wrong.

It was one of those rural stations with no one in it – but that wasn’t the thing.

As the train revved and pulled away, I walked slowly through the old wooden structure – no wicket – and into the empty parking area. The rumble faded into the distance, and the silence grew intense. Nothing disturbed the tranquility but the droning of a few dragonflies.

Not as I remembered

I crossed the lot and stopped to gaze up the welcome sign. Kindly annotated with romanized place names, it showed the road from the station winding up to the inviting triple-squiggle symbol, and the words ‘Yunohira Hot Spring.’

I should have watched the movie again. Not only did I not have a cell phone to call a taxi, I didn’t have the extra time to ride up there and back. I had commitments in Oita, and trains stopped at this spot just a few times a day.

Stricken with a hapless sense of déjà vu, I wandered about. But there was nothing to see or do.

I returned to the platform, and sat down on the bench. There wasn’t a soul in sight; just the dragonflies, hovering on the breeze.

And so for the better part of an hour I contemplated the unspoiled solitude, and waited for the Express to blast by, followed the local, to pick me up and take me back to Oita.

Oh yeah, and (of course) I took some photos. 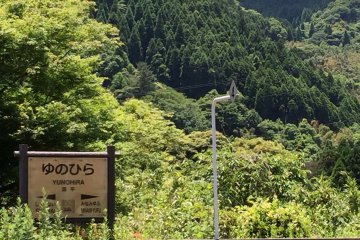 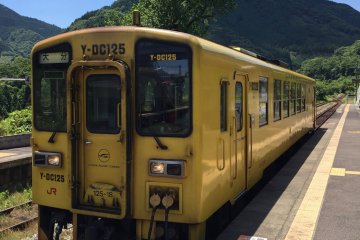 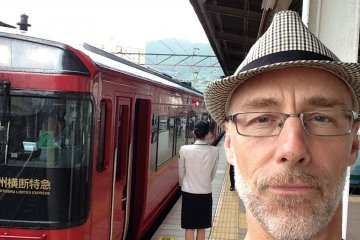 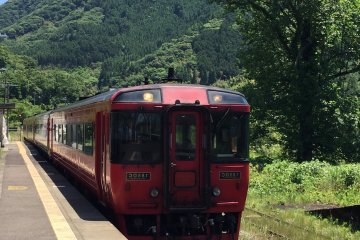