Getting The Blues in Kojima

Kojima’s claim to fame is as the Holy Land of Jeans. At Kurashiki bus station, my departure point, there were denim decorated buses, some with giant denim clad teddy bears. On reaching Kojima,  I expected to be awash in a sea of denim blues and crowds of people. But Kojima didn't look like a Holy Land. It looked deserted. I walked until I saw a huge pair of jeans suspended mid-air. Things began to look up. This was the Kojima Jeans Street.

It was a short street, with few people and most shops closed. A few artisans crafted their denim wares. The blues, though, the denim that Kojima made Japan famous for, was evident in some shops that were open. Kojima might have been quiet that day, or who knows, maybe every day, but I realized it is still the Holy Land of Jeans, where the world class reputation of Japanese “blues” was forged. This is what Kojima is about, just jeans, and that's what denim aficionados come specifically to find. Jeans Street was created in an attempt to bring the buzz back to Kojima, lost after a rural exodus turned Kojima into a “shutter town”, but now it has been glitzed up with the usual suspects of gentrification, artsy cafes, trendy boutiques and art shops.

Kojima’s reputation for the quality of its textiles began around the 16th century, with cotto, for kimonos, belts and tabi socks. Kurabo Mills in Kojima was the first place to manufacture denim in 1960. Kojima became famous and sought after because we can say they employed low tech. They used sewing-machines for producing clothes from bulky canvas cloth, with techniques used for sewing school uniforms.

Kojima jeans can be likened to gourmet jeans, enjoyed by a connoisseur community, who fuss about their denim, and make of Kojima a “denim mecca” for “denim mania.” The jeans cost a fortune. I know because I, who never wear jeans, panted for a pair - until I saw the price of just a shirt. But they are reputedly worth every penny because of their high quality, texture, softness, fabric design.

A traditional indigo dyeing process makes the products color fast, and extremely long-lasting. Of course, this might not be so useful with jeans that you want to look long worn out, tattered and torn. The indigo dye color is now known all over the textile and weaving world as Japan Blue or Kojima Blue. Kojima’s jeans continue to be produced locally adhering to the old ways. There are jeans that have been kept for over 100 years, and are sold as collector items.

So there are jeans hanging from the ceiling of the bus station, teddy bears and denim painted taxis and train turnstiles and lockers, denim blueberry ice cream, a supposedly indigo colored road. However these are just the extras, maybe optimistically meant as crowd pullers and pleasers. Kojima is still just for the blues.

I took Bus #6 from JR Kurashiki Station to Kojima. You can walk to Jeans Street in about 20 minutes. The bus ride took one hour each way.  You pass through the backstreets of Kurashiki before uphill countryside and small towns.

There is a beauty products mega mart just past the bus and train station. Also a clothing discount store. but made in Japan jeans are not available there. 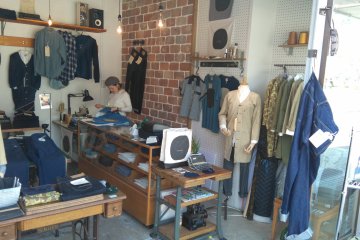 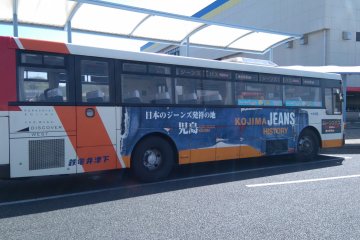 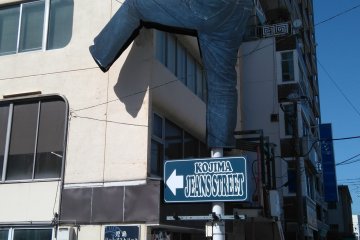 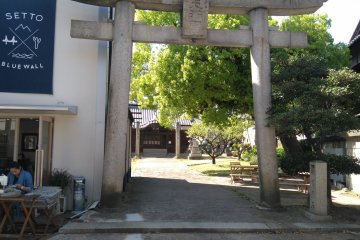