Sit, eat & drink while soaking up the seaside view

Suffice it to say that that Ushimado is one of my favorite places in Okayama Prefecture and certainly the Hotel Limani adds to the picture. It is located at the end of the center of town across the street from Nippon Olive.

The parents of my son’s sixth grade class and I decided to have our graduation farewell party in the hotel’s banquet hall. The meal was a refreshing light fare of a Japanese and Mediterranean fusion which represents the character of the area so well. After the meal we went out to take pictures by the seaside pool that overlooks two French-made yachts for hire.

I looked to the left and noticed a quaint and crescent shaped bar that wrapped around the pool side of the hotel. I looked at the people smiling, sitting on the bar stools engaged in conversation, occasionally glancing at the sea and her islands. The Limani is quite well known but there are probably few people that go there for the bar. Yet, a little after lunchtime there were people there at tables for two by the windows and seated at the bar. Tourists wandered in occasionally of the street to take pictures.

If the Limani’s bar were in the center of a big city people would want to be seen there. A philosopher once asked, if a tree falls in an empty forest does it make a sound? My question is if you have a drink at a chic bar that no one knows about does it still give you a memorable experience that you may want to repeat? I think the answer is “yes”. Even if you are not a drinker the ambience is worth the price of a cup of coffee or a glass of juice, particularly if you go by car.

Hopefully just enough customers will come and the bar doesn’t become too popular. I like the fact that patrons become part of the scenery without overwhelming it. If you find yourself in Ushimado walk into the Hotel Limani and have a seat at Japan’s Aegean Sea. 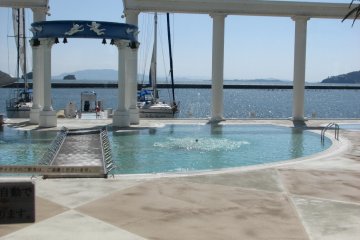 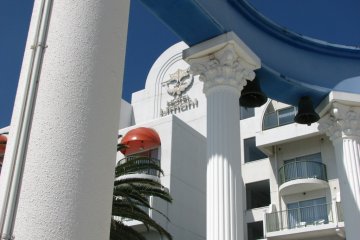 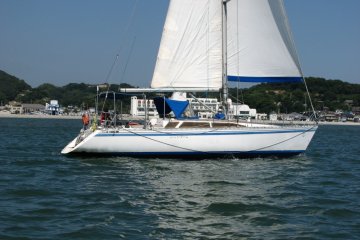 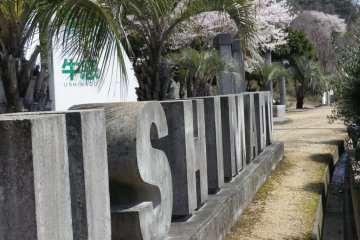