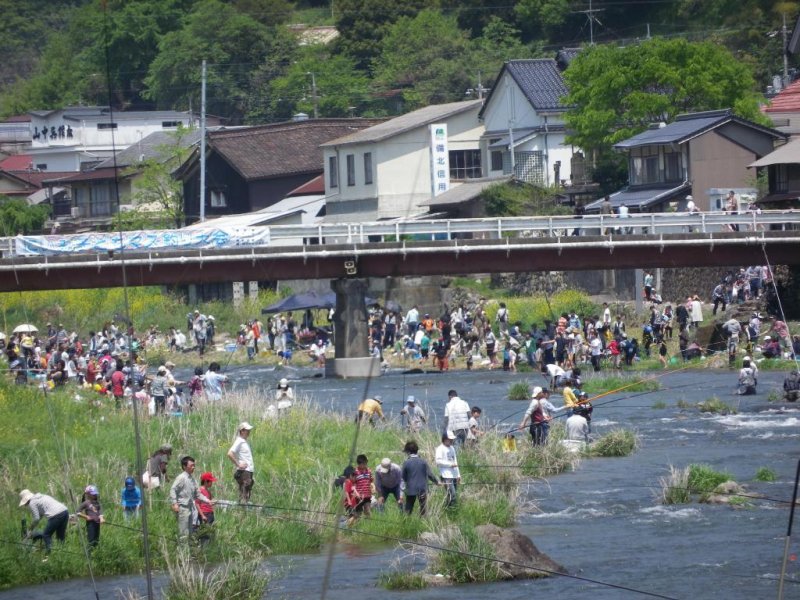 Fun and fishing under the sun on Takahashi River

Every year Niimi City hosts its annual fishing contest, an event which also features a second, unusual type of fishing contest especially for kids. This is quite reasonable considering this contest is held on May 5th, which is Children’s Day, one of the national holidays that make up Golden Week.

For adults and older kids there is the traditional type of fishing contest where you stand along the banks of the river and cast your line in hopes of catching the longest and largest fish. The day ends around 2pm and by the end you feel relaxed having spent the day sitting, fishing, chatting and catching some rays. This is an event for all ages and for all levels of fishing ability.

The first time I saw the kid’s version of this fishing contest I thought it was the craziest thing I had ever seen. A small part of the river had been blocked off, just enough water at about 10 to 15 centimeters to reach up to the knees of a wee youngster, definitely suitable for kids aged 1 or over.

Here was this small stream that looked quite peaceful with the clear running water, and then suddenly it was time for the kiddy fishing dash to begin. (During the day there are 3-time slots when the kids fishing dash is scheduled, and when the horn blows to signal the start this clear stream turns into a place where kids with white farming gloves on are fiercely grabbing fish from the stream and putting into their buckets.)

Within 5 minutes the stream had turned into a murky, slimy colored area and all the fish that were placed there were now in buckets or plastic bags. It seems so crazy that kids would get so much enjoyment from trying to grab fish, and it seemed a little cruel to the fish, but afterward, the smiles on the faces made up for that. As for the fish, they would be taken back to their new homes, or in my case (my own child took part), as we lived too far to be able to transport the fish safely, they were to be released further downstream to live swimming freely in the Takahashi River.