A small aquarium looking onto the Seto Inland Sea

Tamano is the site of the Shibukawa Marine Aquarium. Tamano is a small seaside city in Okayama that is to my mind a wonderful place to visit. The first thing you notice is the cool breeze rolling in relentlessly. The Aquarium is not far from the popular Shibukawa beach. The coastline has long been a gateway to the sea, and sea life in all forms has come to symbolize the city. There are penguins, sea lions, sharks, tropical fish, starfish and everything you would expect in such a place. Let’s get one thing clear. It’s not as massive as Kobe or Okinawa’s aquarium but it is a fully operational, impressive park. For 500 yen you get access to 3000 sea animals. Kids get in for 250 yen. There are also yearly passes for families and individuals.

The aquarium opened in 1953. Sound familiar? After WWII a rebuilding phase began all around Japan and the aquarium was part of that. The aquarium is a friendly structure that seems designed to appeal to children. For me the penguin habitat is the most inviting. It’s like a penguin condo.

The best time to go is summer because Tamano has its naturally cool breeze and the aquarium is temperature controlled. There are discounts offered for large groups or groups of young students, so keep that in mind if you decide to come. I used to think that my love for aquariums would wane after I went snorkeling in the Sulu Sea off the coast of Palawan in the Philippines and watched the Little Mermaid, but I now know that aquariums bring people to the sea in ways that going to the beach could never do.

The creatures that I only saw in the distance in the Philippines were right in front of me at the Aquarium. Animals that are normally in an environment that is inaccessible to most humans are our neighbors at places like this. My kids asked the care takers, “Have you fed the penguins?” “Yes, they’ve been fed.” Then I realized that we hadn’t fed ourselves and we headed out to the nearest fast food restaurant and had lunch. Tamano is a great little town with a great little aquarium. 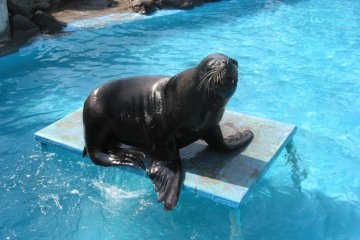 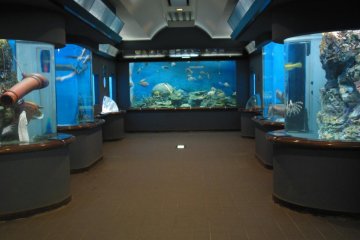 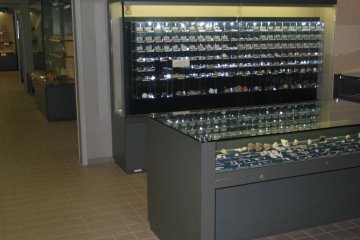