Paradise on the Seto Sea

Years ago the mayor of Setouchi City said to me, “we wish that the Seto Sea wouldn’t be considered Japan’s Mediterranean but rather simply referred to as the Seto Sea.” After that, you can tack on whatever adjectives you like.

I feel for the mayor and the people of Setouchi City but let’s face it. Local people play up and in fact love the Mediterranean allusion so of course visitors and residents from abroad will too. Visitors from all over Japan and the world come to Ushimado which offers a variety of hotels, pensions and a yacht harbor where you can moor your boat. I heard that a couple sailed in from Germany and stayed in Ushimado for several months.

Ushimado’s Pension Village is in an area of Ushimado slightly off the beaten track. You have to take a taxi or drive to get there unless you are a super hiker. The village is actually a consortium of privately owned guesthouses, bed and breakfasts and vacation rentals in Ushimado. Most of them are located in the hills above the yacht harbor.

If you rent a car and drive from Okayama station I think you won’t be disappointed because this will give you a chance to take the scenic route where you can drive through some of the narrowest roads you’ve ever been on and take a quick look at Kugui, Houden and Nishiwaki before arriving in the Pension Village area. Your head will swing from left to right as you take in the magnificent houses that people have constructed.

Ushimado Pension Village is not a rural community where you can get a sense of your own insignificance in the grand scheme of things. It is a place where you can go to take yourself out of the game. People staying in this leisure community do not have to worry about the nearest school or shopping center. They only have to be concerned about their level of relaxation. What locals always hope is that some of the luxury, leisure and nonchalance spill over on to them. I look out on the regatta and forget about the Mediterranean. I only see the Seto Naikai. 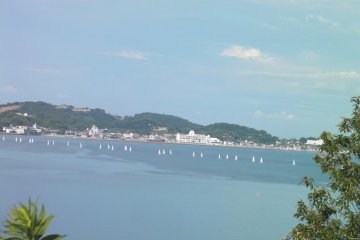 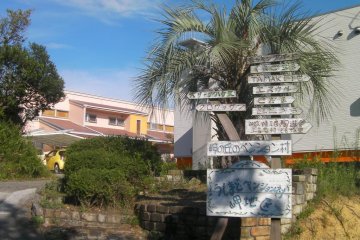 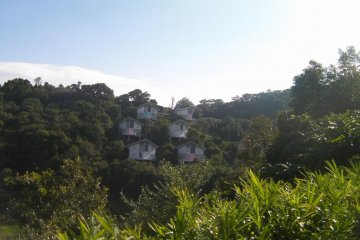