In 1409 I sailed to the kingdom of Ayutthaya, a journey of many weeks, with only the stars and the moon to guide us.

Under the guidance of King Bunei I was here to establish an embassy, a foothold to thwart his rivals. Every evening the fragrance of turmeric and lemongrass would tantalise me on the balcony. While I missed the sea grapes from the Ryukyu Islands, the tropical herbs and flavours here soon became addictive, and I vowed to bring these ingredients and recipes back home.

Little did I know but a century later in 1542, sailors from a land I have not seen would challenge our lucrative trade routes with a foothold in Tanegashima, and later at Nagasaki. The irony is that later on in 1700, Maria Guyomar de Pina, a chef to the Ayutthaya royal court would introduce a delicacy known to Thais as Foi Thoung, a golden angelic dessert made with Japanese and Portuguese techniques.

These days many culinary capitals champion multi-cultural cuisine, but Okinawa had nurtured it since the 1400s. From Hokkien pork to Thai Indica rice that is the base ingredient for Awamori, Okinawan cuisine is a fusion of flavours bought in on sailing ships from around the Pacific. For example, Goya Champuru comes from the word campur in Malay, which means "something mixed". The variety of Okinawa's culinary heritage is as diverse as the rainbow of colours at a Ryukyu banquet.

Today, five chefs certified by the Thai Ministry of Commerce, continue to enrich and preserve these culinary traditions at Curuma Restaurant. Like the seafarers six centuries earlier, these Thai master chefs may miss the comfort of home, but they work together to sharpen their skills and create both traditional and fusion cuisine that is a sign of a new creative future for Okinawa. It is apt that this Thai kitchen is named after Curuma, whose botanic family includes turmeric and Siam tulip. Also known as a "hidden lily", they are known for its anti-inflammatory and antioxidant qualities. They are also part of the higher ginger family, so it is not surprising that lemongrass is part of the repertoire here.

On their seasonal menu today is Noni-fed pork served in curry. The noni medicinal plant is known for its medicinal/healthful qualities.

Other menu items on the menu range from original curry and authentic Thai food to those who are prefer to dial down on the spice scale, such as Pad Thai noodles and Pineapple Fried Rice. They also serve fish, steak as well as a colourful selection of tropical desserts and fruits.

Outside the cliffside café is a promenade where birds and butterflies dance, a herb garden, and a health food bazaar, making it a perfect place to take the family for lunch. A spectacular view of the Pacific Ocean lies beyond the terrace, where you can imagine the sailors leaving the families for worlds unknown. It is a sanctuary in the sky that heals the tiredness of everyday life.

Curuma Cafe is 40 minutes East of Naha Airport by car, which is the preferred mode of transport in this remote part of Okinawa main island, or 1 hour 20 mins by bus. 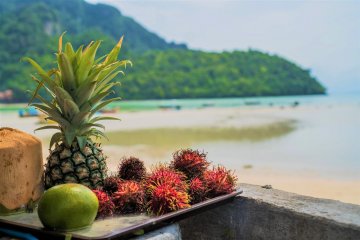 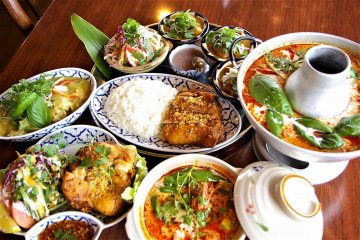 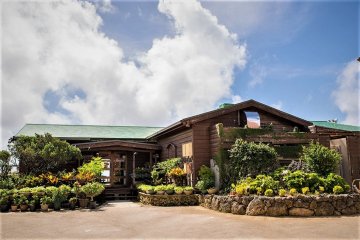 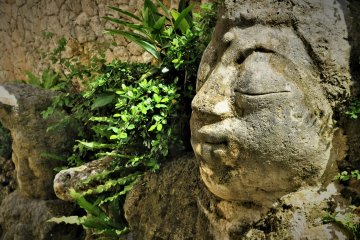 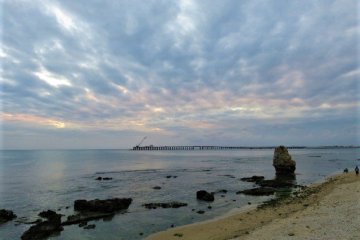 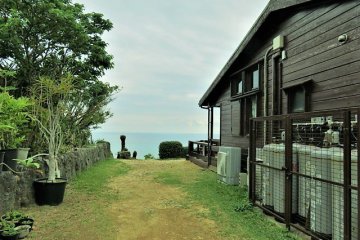 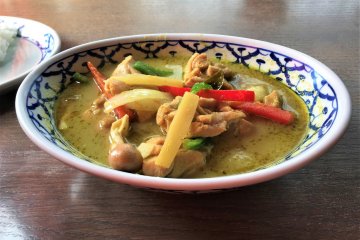 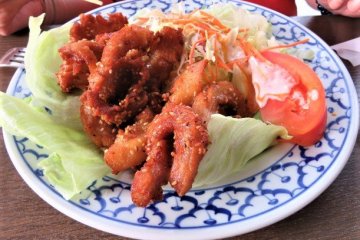 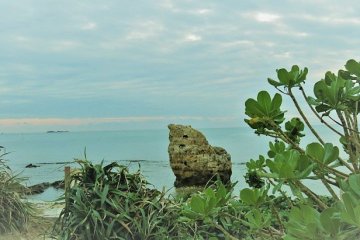 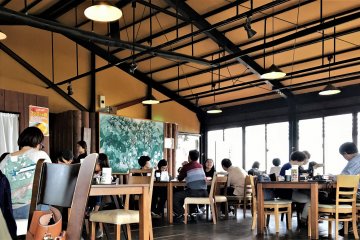 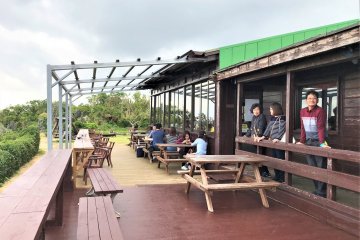