Everything a Karateka Must Do When Visiting Okinawa

Explore the world of Karate in southern Japan

Japan is a beautiful place full of history. And while the country as a whole is known for many things, its localities have incredible identities of their own. None more so than Okinawa, the birthplace of karate. If you're interested in, or have ever practised a martial art, Okinawa has many things hidden away for you to explore. So, what can karateka and others do in Okinawa to sate their passion for martial arts?

Karate is an open hand martial art which was originally developed from Chinese martial arts by the Ryukyu Kingdom, which was historically based in Okinawa. The Ryukyu Kingdom was annexed by Japan in the late 19th century, and karate was popularised by Gichin Funakoshi in Japan from 1922 onwards. Funakoshi developed the Shotokan style of karate, an inherently more 'Japanese' martial art than the Okinawan 'te', and he and his students spread Shotokan Karate to Europe and America.

Although, as one of the most popular international martial arts, karate is constantly evolving, Okinawa remains the place where it all started and is remembered as so by karatekas around the world. The island is gearing up for the 2020 Japan Olympics, where it's key that karate makes a good impression to remain an Olympic sport (see https://www.theguardian.com/travel/2017/dec/05/okinawa-japan-karate-centre-kaikan-martial-art-2020-tokyo-olympics for more information).

It is very rare for flights from the west to travel directly to Okinawa. International flights to Okinawa travel from Taiwan, Seoul, Shanghai and Hong Kong. If you're flying you can either travel to a major Japanese city airport (such as Haneda or Narita Airports in Tokyo, or Kansai or Itami Airports in Osaka) or one of the aforementioned countries and catch a flight to Okinawa there.

If flying is not your favourite option, Tokyo, Nagoya, Osaka, Kobe and a host of other locations all offer ferry boat travel to Okinawa, though they’re quite slow with weekly ferries between Tokyo and Okinawa taking roughly 44 hours a trip.

The history and locations of Okinawa have resulted in much international interest and themed merchandise. Okinawan Martial Arts are practiced in every country to the point where films and games based on them, from Karate Kid to the national Lotto's own martial arts game Karate Pig (see: https://www.lotto.net/), which has players travelling through Japan (Okinawa included) on a journey to win karate belts before facing the final black belt showdown. If you're looking for martial arts in Okinawa, then there's plenty to see, and Wikipedia has an entire section dedicated to Okinawan martial arts (see: https://en.wikipedia.org/wiki/Okinawan_martial_arts).

The Shureido stone in Naha is the perfect store for all your martial arts needs. There are two karate museums for you to choose from, one in Tomigusuku (Karate Kaikan) and one located in Nishihara. If you're looking for something outdoors you can find a castle in the town of Chatan which once belonged to Master Chatan Yara, a Okinawan famous karate and kobudo expert.

If you want to train karate at Okinawa, there are some 400 dojos in Okinawa so learning training etiquette and deciding on what style and intensity before you go is a must, Okinawa's Traditional Karate Liaison Bureau can help you find the correct Dojo. Lastly, there are many tombs and monuments to famous martial artists in Okinawa, from Motobu Choyu to Matsumora Kosaku, that you can visit, to get the historic karate experience.

Okinawa has so much to offer any exploring martial artists. And should you get bored of everything mentioned above, although karate is a massive part of Okinawa's history, there are many lovely restaurants and other tourist areas, which are all featured on our site (see: https://en.japantravel.com/okinawa), for you to explore. 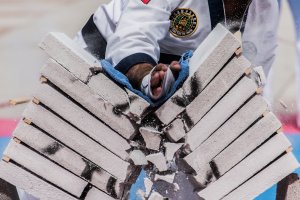 Explore Activities around Japan
Back to Contents