Fly Direct from Bangkok to Okinawa

Flights starting from less than 10,000 yen

Japan is a popular destination from travellers from Thailand, with 96,000 visiting in the month of December alone. That is enough to fill over 400 Airbus 320s.

Of course, you don't have to be Thai to fly from Bangkok to Japan, as over a hundred different nationalities use this South East Asian hub to fly from all around the world into the land of sweet potato ice cream and majestic castles. Whether you are a backpacker from Perth or Rome savouring the delights of Phuket before hopping for some diving in Okinawa, or a business executive wanting a break after a meeting in Bangkok, Japan is a popular and convenient destination with flights around the clock.

Travellers from Bangkok now have a new gateway into Japan, with direct flights starting from February 19, 2017. Peach Airlines, a low cost carrier that is partly owned by All Nippon Airways, is flying three times a week from Bangkok Suvarnabhumi at 1:40 am and arriving in Okinawa Naha at 7:55 am, making Okinawa a great weekend getaway or the starting point for a Japanese adventure, with Naha being connected to 18 other cities, such as Hiroshima, Kumamoto, Matsuyama, Miyako, Nagasaki, Nagoya, Osaka, Sendai, Shizuoka, Takamatsu or Tokyo. Many smart travellers are discovering that it is shorter and quicker to fly first into Naha and then discover places like Kumamoto or Hiroshima, rather than flying into Tokyo and then back tracking to places to the south or west. 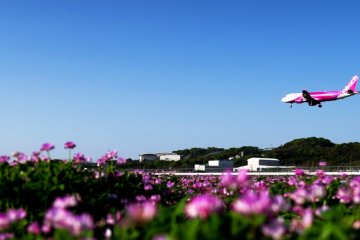