Not to be confused with Miyakejima south of Tokyo, Miyakojima lies about 300km southwest of the main island of Okinawa. It's a relatively flat place formed from limestone and surrounded by smaller islets offering spectacular coral reefs, huge tunnels, rocks, arches and caves. Most of these are long and winding, opening out into sandy areas and smaller reefs. Some entrances are almost or totally dark, making a dive light essential. Because of the low energy of the seawater, the sediments found along the bottom are generally very fine. A lot of the main dive sites that offer this kind of environment (such as those below) can be found along the north coast of Irabu island, one of the many islets surrounding Miyakojima.

The Overhang is very open with rocks and boulders dotted around. At 15-18m lies a number of smaller rocks containing a huge variety of coral, linear blennies, emperor shrimps (if you look very closely) and plenty of semi circle angel fish that streak by. The water is clearest over the surface of the rocks and under the glare of the sun are white spotted puffer fish, peach fairy basslets and coral groupers.

The Cross Hole 15 minutes away offers a range of caves and small cliffs, some almost like monoliths. At 18m is a small series of rocks where white spotted puffer fish and yellow fin goat fish hover about and schools of yellow spot emperor fish flit around. Next to this beautiful sight is a dark entrance into a small tunnel. Once inside, the only way is up. The tunnel's dynamic shape is impressive, offering a glimpse of interesting limestone formations. The exit is shaped slightly like a diamond and the sun shining through is spectacular.

The W-Arch is about 5 minutes from the Cross Hole. Its highlight is at 18m or so where it's possible to swim through a rock into a small area of dead coral and sand. The sun is a wonderful sight to behold and the fish bright and plentiful. Yellow long nose butterfly fish have made a home for themselves in the dark corners, while coaxing a lion fish to swim towards the sun for a photo was perhaps not the best thing to do as he darted off, his fins bright red, leaving us with not the best of pictures.

The focus of Gakeshita is one rock leading into an extremely humid pitch black dome. As the swell from the open sea begins to enter, the water level and atmospheric pressure both rise. When the swell recedes, air pressure goes down, creating a misty sheet of vapor over the surface. Such vapor is formed when the water level rises and falls in an area of high humidity and there are said to be very few places to observe this while diving. The ocean seen from inside the dome is a transparent blue and along with the vapor, forms an almost mystical sight.

Wataguchi Garden is extremely accessible and will appeal to beginners or as an easy relaxing dive. Coral gardens can be found upon descent, while nearby a ray emerged, shaking off its sand camouflage and disappearing into the distance. Visibility is pristine and the water not too cold. The dive consists of meandering between different rocks and coral heads along a bottom of pure white sand where divers can relax, enjoy the clear water and observe sea snakes, black spotted puffer fish, white backed anemone fish and porcupine fish drifting slowly by.

Miyakojima is as popular for its white sandy beaches as it is for its dive sites. There are some restaurants and bars in the city centre, lookout points with spectacular views and beaches that are perfect for sunbathing or snorkeling. The best way to get to the island is to fly directly from Haneda with Japan Transocean Air (flight time around 3hrs) and if diving, to arrange everything with a dive school that will also book accommodation or book through an agency. A visit to izakaya "Usagiya" is not to be missed. Dancing to live shamisen music is the perfect end to a day of diving.

I am an avid scuba diver. Born and raised first in the UK, I then moved near Yokohama and spent my childhood summers learning how to snorkel on Sado Island near my mother's home town in Niigata. When not in the water, I love running around the Imperial Palace and exploring Japan's many mountains,... 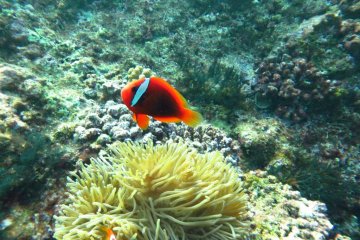 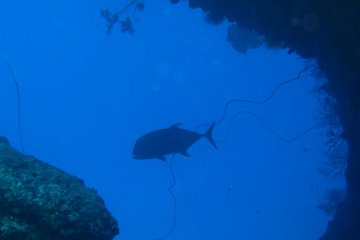 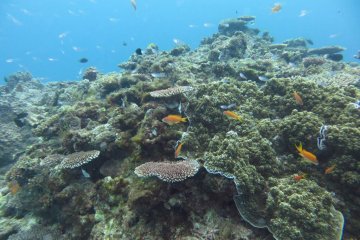