First off, I realize the name of this race seems to contradict itself - how does “9.5k” and “marathon” marry up? To be honest, I cannot tell you. I just know that many of the trim races here in Okinawa are referred to as trim marathons. My guess is that the word “trim” may be the answer, as in cutting down in size, but other runners I have spoken to insist that it isn’t.

Nonetheless, I guess it doesn’t really matter. What does matter, is that I explain what a trim marathon is. A trim marathon, which is more often than not a 10k race distance or shorter, is a race in which runners have to predict in advance what their finishing time will be. Since part of the challenge, besides running a fast race, is to finish as close as possible to your predicted time, runners are not permitted to wear any sort of timing device. This ensures that no one has the ability to track and control their pacing, and ultimately prevents runners from unfairly winning awards.

I first ran a trim marathon last year, when I heard about the Shioya Bay 9.5k race in the northern village of Ogimi. The concept of predicting a finish time and then trying to accurately validate that prediction, was enough of a drawing card for me. I’ve always enjoyed a good running challenge and this was one I wanted to take on.

Last year I not only finished within a minute of my predicted time, but I was also the second female to finish. Keep in mind though, that this is a fairly small race, with an average turnout of approximately eight hundred runners, and some of those are there to run the shorter 5k and 3k races. Still, I was happy to receive my second place prize - a handcrafted wooden frame with details of the race etched into the wood at the bottom.

This year, I decided to go back and try and move my predicted and actual finish times even closer together, and I was almost bang on; I had a time differential of just 21 seconds. And once again, I was the second female to finish, and so I scooped up another beautiful wooden frame.

Besides the obvious bonus of receiving nice awards, I love this race for other reasons. The drive up there, which takes about an hour or so from Kadena, is really pleasant. My husband and I drove up on the expressway to make sure I got there in plenty of time to pick up my race bib, but we took the 58 on our way home and enjoyed the beautiful coastal views.

Shioya Bay itself, is also really pretty. The course, which is mostly flat, wraps around the bay and takes runners along a lightly populated area. The majority of runners and race supporters/volunteers are local residents who warmly welcome visitors participating in the event.

Another nice thing about this race, is that the Y2000 race fee includes a beautiful tea cup, and also tickets that can be redeemed at food stalls after the race. We opted to use my tickets for the mochi that quickly caught my eye, although also available was freshly made Okinawan donuts, soba noodles, curry, and onigiri.

I would recommend this race to anyone living in the mid to northern parts of Okinawa, but for those living closer towards Naha and the southern end of the island, it may not be worth the drive.

Since I wear a few different hats I'm not quite sure how to put myself into any one category, at least when it comes to defining an occupational role. I'm a runner, running coach, blog editor for a women's trail running group, and freelance writer for Stripes Okinawa. I am also a mother of two gi... 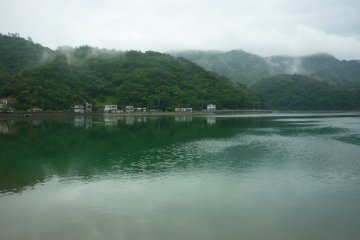 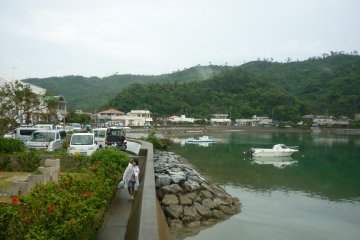 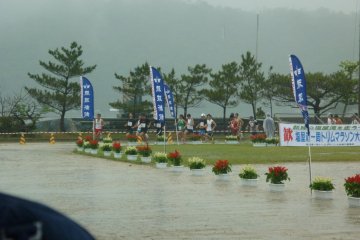 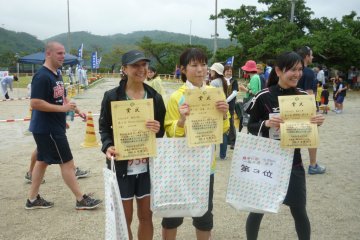