The many faces of Nankai Railways

At first the iconic Nankai airport limited express sported a royal blue, the color of anime heroes, then it was white and momo, the color of peach airlines, later it was transformed into the darkest black, giving patronage to Star Wars. Nankai in its many variants is a reflection of the times.

To mark the 20th anniversary of the opening of the Nankai Airport Line, one train was repainted in red, coinciding with the release of Episode 7 of the Mobile Suit Gundam Unicorn series in 2014.

Nankai used to be the owner of the venerable Nankai hotel at Nanba where I was married. Railways, Like airlines would diversify its revenue base but now is back in its core business. It is easy to forget but railways were the front runners of development in suburban and rural Japan.

I wasn't always a Nankai fan, my loyalties were with JR as that was the only railway company that I knew. In fact when I first lived in Japan my first words were parroted from the train conductor at Mozu, having heard it 100 times I can say in Japanese, "change at Tennoji for the Nara line". Then I met someone on the Nankai line and my loyalties were tested, I was literally on the wrong side of the tracks. Would I catch the JR train and risk loneliness or be with the love of my life on the Nankai line, the two lines meeting each other at Mukunigoaka. It was a JR hub but snubbed by the Nankai express trains, and my valentine had to compromise by catching the semi express with me to Mukunigoaka . The things you do for love.

While you can also change between the two lines at Shin Imamiya or Nanba, these two fierce rivals want your patronage with them for as long as possible. On the way from Kansai to Nara, it is fastest and cheaper to stick to one company, or risk the wrath of paying extra and slugging your luggage across a labyrinth of underground passages in Nanba.

Nankai operates local, express and the luxury rapit limited express trains to the airport. Visitors from greater China and Singapore get access the rapit economy ticket from 1,040 yen each way, which needs to be booked before you arrive in Japan. It is worth the effort as the standard price is 1,430. The first train leaves Nanba at 06:00 and arrives at Kansai Airport at 06:35.

Unless you want to ride at the speed of a donkey, avoid the local all stops trains. The express is the best value for money with a discount ticket from the resellers about 5 per cent off especially travelling off peak between 10am and 4pm at almost 10 per cent off the full price. For example 440 yen gets you from Nanba to Kishiwada off peak while 480 yen gets there at peak time. The full fare would be 490 yen.

JR also runs between Nanba and Kansai Airport. While usually faster than the private railways like Nankai, it is inhibited by having to run a longer route, the JR airport line being a branch line coming out of Hineno, as well as a change at Tennoji. So the Nankai line is faster and cheaper between Nanba and Kansai airport. If you are heading from the airport to Kyoto however, that is another story. These limited express train carries more passengers than the Jetstar A320 but are the forgotten workhorses of today. 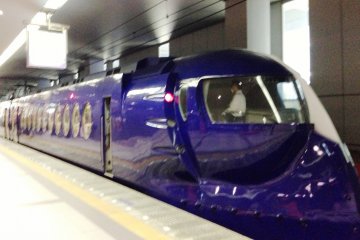 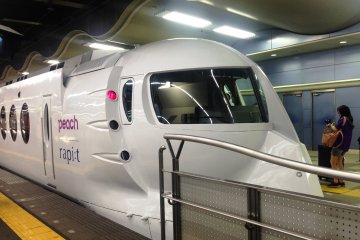 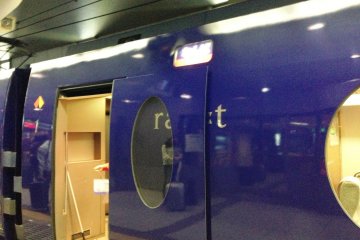 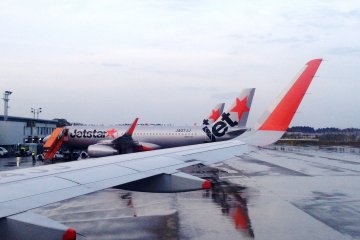 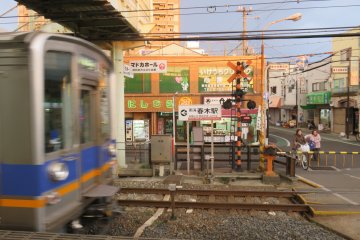 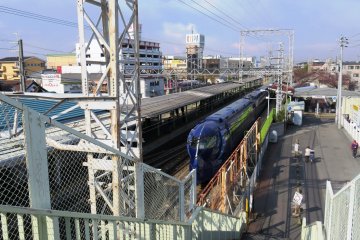 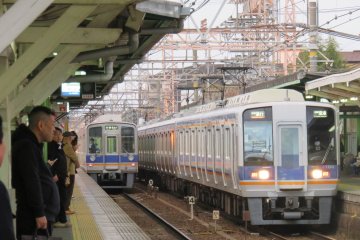