Take a pilgrimage to the home of craft beer

While most beer lovers would head straight for the beer museum or one of the major breweries, it is also possible to find beer heaven in one of the many microbreweries, like Minoh Beer, named after their town in northern Osaka. If you are planning a walk to see the Minoh waterfall, don’t forget to stop by the Minoh Beer Warehouse afterwards.

Founded in 1997, Minoh beer is managed by the three Ohshita sisters who make their original beer, winning dozens of awards since their opening. If you don’t plan on going to Minoh, you can also visit Beer Belly and Beer Belly Edobori, two bars managed by Minoh Beer and that offer beers from different microbreweries.

After a 10 minute walk from Makiochi station, it is hard to miss the white and brown building with the name of the brewer written in big letters on the front. When you enter the restaurant, you will face the counter, which is literally surrounded by beer. Above you is the menu with prices starting from ¥520 to ¥620 for a half-pint up to ¥930 ¥ for a pint. On the left, there is a Bottle Shop where you can bring back a bottle or two and on the right, detailed information on the available beers. There were ten choices during my visit.

In the middle of the counter is the food menu, in Japanese only. I decided to go with a margarita pizza with a Yuzu White beer. I figured it would be a perfect combination as I like white beer as well as yuzu, a fragrant Japanese citrus that is tastes like a cross between lemon and grapefruit. Even if I could not properly distinguish the unique taste of the yuzu, or at least not how I was expecting it, I really liked the beer that ticked all my tastebuds. For the pizza, nothing to say except delicious.

There were no other customers while I was there, but I was not expecting a crowd on Tuesday lunchtime at the microbrewery’s restaurant. The background music was well chosen, including Leonard Cohen and The Clash, and the place was rustic with solid wooden rafters and columns. I wish that I could go back in the evening to get a couple of beers while talking with friends.

It is a 10 minute walk from Makiochi station or 20 minutes from Mino-o. 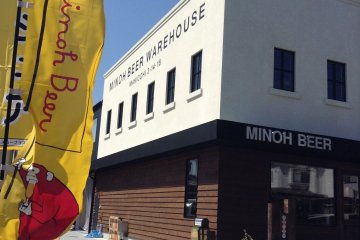 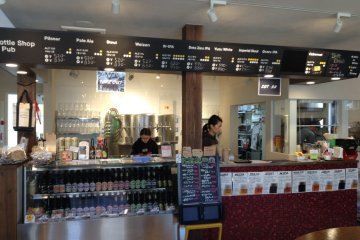 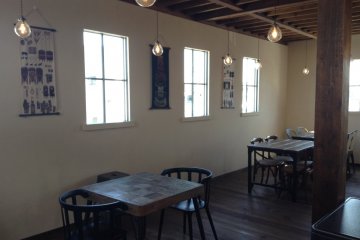 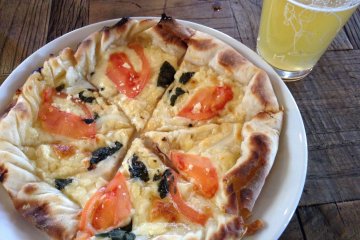