Expert and patience advice in sharpening your own knife in a prebooked class (Photo: Bonson Lam / JT)

Did you know that roughly 90 percent of all knives used by professional chefs in Japan were made in Sakai City? There is a very good reason for it: knives made in Sakai are sharper and hence they cut better.

As Japanese cuisine is very versatile, so are the Japanese knives. There are 200 types of kitchen knives alone in Japan. In other words, there is a knife for every type of food used as ingredient in Japanese cuisine.

The ultimate sharpness is needed for slicing raw fish into sashimi. A sharp, clean cut enhances the presentation of sashimi and even its taste. If you are a sashimi fan, and you can’t wait to see another plate with juicy-looking sashimi in front of you, then you first think of the mastership of the sashimi chef. However, the best sashimi chef is only as good as his knife cuts well.

In the Sakai HAMONO Museum, located inside the Sakai City Traditional Crafts Museum, you can see the whole selection on display in show cases. The museum is run by the Federation of Sakai Cutlery Commerce and Industry Association and it is located in central Sakai. Since 2007 blades from Sakai are registered trademarks by the Japan Patent Office.

Looking at the variety of knives makes you realize how specialized smiths in Sakai are. You will learn a lot about knives and about cutting, and you can admire the tradition, precision and craftsmanship of Sakai’s smiths. Of course you can select a knife or two for yourself or buy one as a present for family members or friends.

Knives hand-crafted in Sakai are the perfect omiyake from Japan that will bring the receiver long-lasting satisfaction whenever using it, provided you keep it sharp! The Sakai experts recommend to sharpen your knives once a week by using a whetstone with a fine degree of coarseness.

The origin of blades from Sakai can be found in the 5th century. At the time it was not cooking knives that the blacksmiths forged, but tools to build kofun, or tumuli, which are ancient burial mounds built as a last resting place for the remains of rulers at the time. This was the peak time of the so-called Kofun Period in Japan which lasted from the mid 3 century to the mid 6 century. There are tumuli in other parts of the world but the characteristic of tumuli in Japan is that many of them are keyhole-shaped.

A large cluster of these kofun are found in the Mozu-Furuichi area of Sakai City. The largest tome is the Daisen Kofun, which is said to be the burial mount of Emperor Nintoku who ruled in the 4th or 5th century.

At the time a cultural exchange took place between ancient Japan and neighboring ancient kingdoms in Korea and China. This resulted in an influx of craftsmen, and it also brought blacksmiths from Korea who passed on their skills to the locals in Japan. Sakai, located at Osaka Bay and at the mouth of Yamato River, became one of the gateways to Japan for new technology and knowledge from ancient Asia, which also brought Buddhism to Japan. Centuries later Christian missionaries and

Centuries later Sakai’s blacksmiths produced swords that were used by samurai warriors until the end of the feudal period in the middle of the 19th century. It was not swords that cemented Sakai’s fame as blade-making center, but tobacco knives. Portuguese traders had brought tobacco to Japan and in the 16th cultivation of tobacco plants took off. For cutting off the tobacco leaves special knives were needed, and Sakai blacksmiths filled this gap by forging the first tobacco knives in Japan.

The author visited two Sakai master craftsmen and watched the process of how a Sakai blade is made. Ikeda Yoshikazu is a kajiya, a smith, who does the forging. Morimoto Koichi is a hatsuokeya, a smith who does the sharpening. Read about this in "Sakai Knife in the Making" article. Please note that you need to make an appointment if you want to visit the workshop of a craftsman.

Your favorite knife is only a short train ride away. Getting to Sakai is easy and fast: catch the train from Osaka, Namba (10min), or Osaka Umeda (30min), or travel by train from Kyoto, Nara, Kobe (all 1 hour).

Kofun and knives – the perfect day out in Sakai! 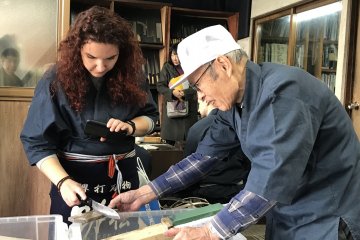 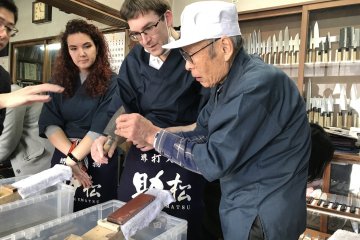 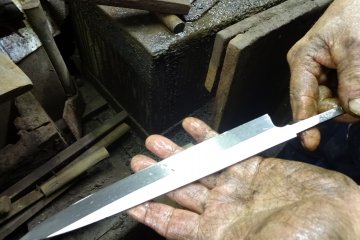 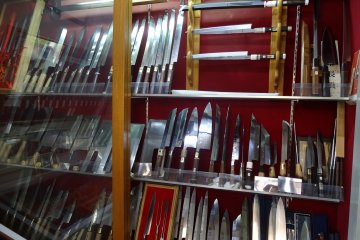 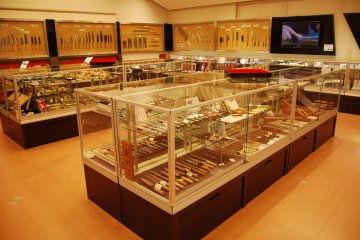