Fighting back tears, the young Hanzawa Naoki will see something that will burn into his soul for the rest of his life. The heavens were pouring out, not in money or blessings, but tears of pain and bitterness. His father was fighting for the life of his family owned factory, and it was all in the hands of a banker who could not care less. From the corner of his eye, young Hanzawa can see the look the indifference on the banker’s face, one that led to the suicide of his father. Hanzawa’s revenge? To work for the very employer that destroyed his family, so he can exact judgment on that very man. It is like a modern day version of Macbeth that has more twists and turns than a San Francisco street.

Fast forward another generation in the powerhouse of Kansai, I am sitting in a posh cafe that is another universe from the earthy values of post war Japanese manufacturing. You may say that the modern equivalent of “ladies who lunch” is “power bankers doing deals in the Manhattan of Kansai”. Actually in the movie Hanzawa Naoki, it is not so much a champagne and junkets affair, but literally a life and death struggle, not with aliens or nuclear weapons, but the weapons of financial destruction. The enemy is within as much as it is outside. Facing the possible destruction of his employer as well as his personal reputation, Hanzawa Naoki stoically rebuilds the shattered loan portfolio of his bank, piece by piece. There was a scene where Hanzawa was discussing the future of the bank with his colleagues in this very cafe, a scene that rocketed this place to national prominence.

People who lunch or have tea with no knowledge of the movie setting can relax; blissfully unaware of the tear inducing fears of this cinematic masterpiece that look Japan and much of the world by storm. In fact, if you are here on a weekend evening, the crowd is relaxed and comfortable, with soothing music and the delightful clang of silverware on the porcelain plates taking you far from the 9 to 5 world of corporate power plays.

The dessert menu here is a feast for the eyes as well as the tastebud, and if you are in a group, try a variety of cakes, puddings or iced confections for maximum enjoyment.

The floor to ceiling windows towering over the boulevards of Umeda and Osaka station are soothing for the eyes, whether you like to be bathed by the sun on a fine afternoon, or be dazzled by the light show of the surrounding offices and department stores in the evening. While not quite Shibuya Crossing or the old world charm of Art Deco Ginza, it is a pleasant place to watch the world, though you are more likely to be mesmerized by the culinary creations inside than outside. 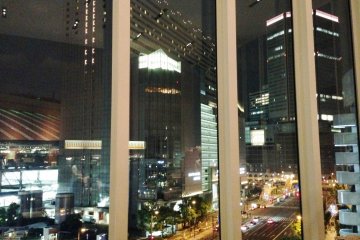 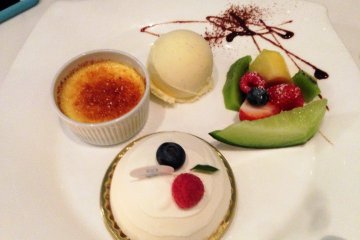 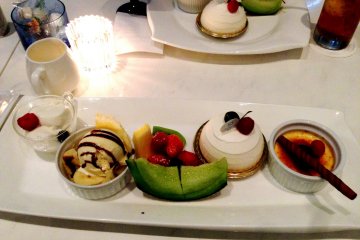 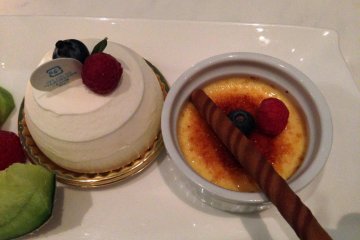 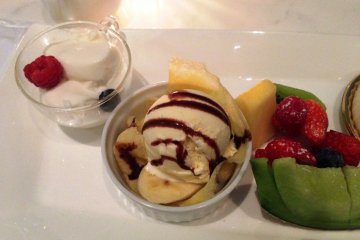 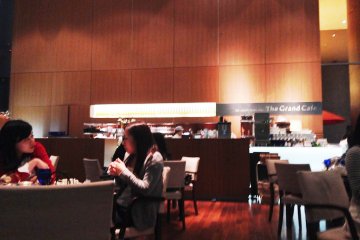 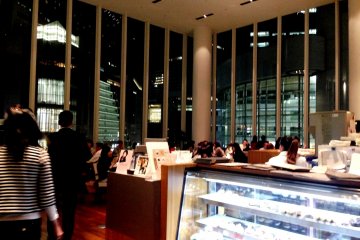 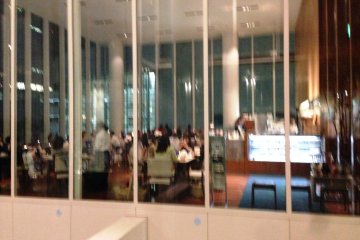