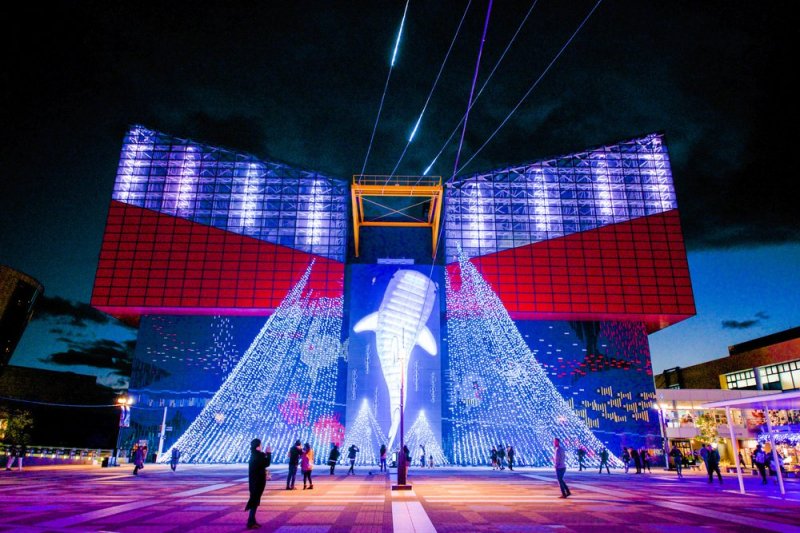 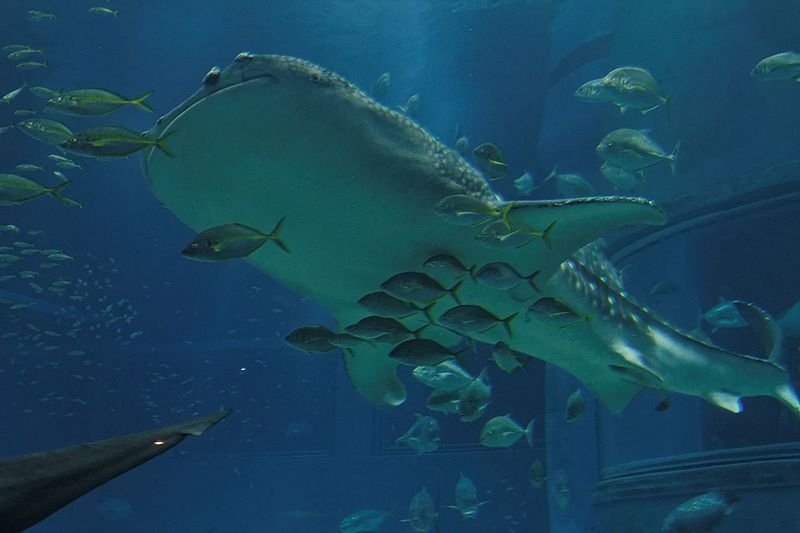 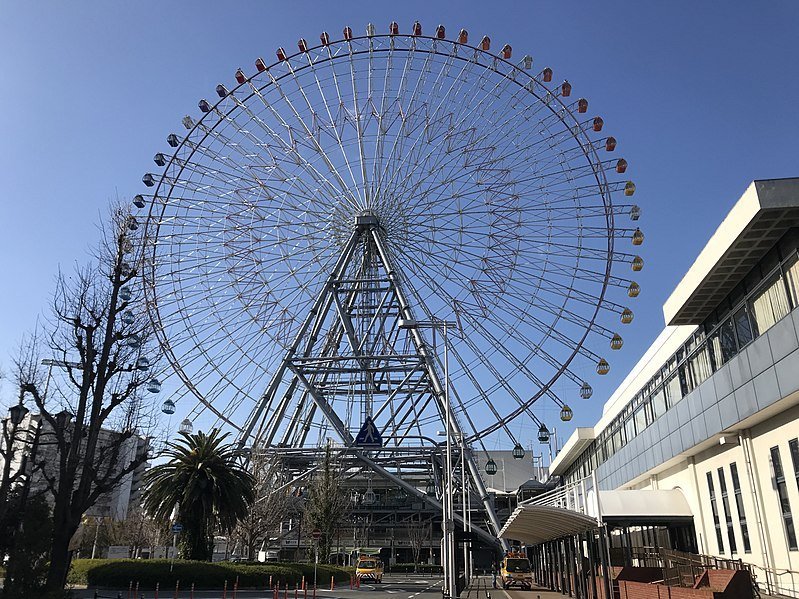 The Kaiyukan in Osaka is the largest aquarium in Japan and at the same time one of the largest in the world. It is located in the Minato district near the port area of ​​Osaka. Opened in 1990, it is one of the largest indoor aquariums with a total water volume of more than 11,000 tons is home to around 620 animal and plant species.

Timed tickets are required for entry currently in order to limit the number of guests per hour.

The main theme of the aquarium is the "Ring of Life" or the "Ring of Fire" and is represented by the arrangement of the more than 15 different pools. Each of the pools represents a specific region on the Pacific Ring of Fire and visitors can experience themed worlds on a tour from the Japanese forests to the Antarctic to the heart of the aquarium, the Pacific Ocean. In the latter, for example, there is a whale shark, the largest fish on earth.

In addition to these permanent exhibitions, the Kaiyukan also offers some interactive highlights, where you can get close to different animal species and sometimes stroke and even feed them. The aquarium has a souvenir shop and is located directly at Tempozan Harbor Village, a shopping and entertainment complex with many restaurants and shops.

Travel from the 8th floor down to the 4th all while gazing as these majestic and serene creatures swim alongside other marine life in their collosal tank. The Kaiyukan has one of the world’s largest manmade habitats for whale sharks and the cylindrical tank ensures that you’ll see their every angle.

In the Maldives area of the Osaka Kaiyukan you can experience touching some incredible species of sharks and rays. Compare the texture of the rough sharkskin to that of the smooth ray. Will you be brave enough to reach down and touch these majestic animals?

Experience a new whole of marine life and romance during the mysterious night aquarium. Every night from 5 pm until close the lights are dimmed and the aquarium takes on an otherworldly quality as the animals show their nighttime behavior and begin to fall asleep. Let their sleepy world lull you into a calm unlike any other.

At the nearby Tempozan Harbor Village right outside of Kaiyukan, you can see even more interesting things, like Legoland Discovery Center Osaka; the Tempozan Marketplace with its various shops; or Naniwa Kuishinbo Yokocho, an eatery with local specialties as well as well-loved staples. Then take a 15-minute ride on the Tempozan Giant Ferris Wheel, one of the largest in the world.

About a 5-minute walk from Osakako Station.

Osaka Aquarium Kaiyukan is one of the largest public aquariums in the world. The aquarium is a must see with an 8 story "Ring of Life" exhibit which includes whale sharks and manta rays

At the Osaka Aquarium Kaiyukan

The photos of the scenes with animals in Osaka Aquarium.

Osaka Aquarium is one of the biggest aquariums in the world open to the public. It is located near Osaka Bay in the ward of Minato.

View the varied life in our oceans at Kaiyukan, one of the largest aquariums in the world, and then after visiting the deep oceans ride high above the city of Osaka.

The Osaka Aquarium Kaiyukan by Osaka Bay is a local favorite. With a central tank that extends vertically connecting the upper levels of this eight storey complex, the unique design provides an unobstructed view of the aquarium no matter where you are.

Kaiyukan is one of the largest aquariums in the world and a great destination for a rainy day.

Kaiyukan Aquarium, located in Osaka City, is famous as one of the largest aquariums in the world. You can see whale sharks, sea turtles, and many other sea life there. This aquarium is a great day out for families.

Clean, comfortable beds, elegant décor, close to public transport, helpful staff - The Fraser Residence has them all in spades.

HOTEL MYSTAYS Shinsaibashi makes for an excellent accomodation for tourists visiting Osaka. Combining chic, comfort and convenience, you should definitely consider this hotel on your next trip to this amazing city.

Osaka is famous for many things, one being delicious foods. Takoyaki, or fried octopus dumplings, are a tasty treat first popularized in Osaka.

On Saturdays and Sundays from December 4th until December 26th, the Hyatt Regency Osaka will host a Festive European Voyage Afternoon Tea. The event will include a variety of sweet and savory dishes from different European countries.

Quaint and homey café in a quiet Osaka district

Universal Studios Japan (USJ) in Osaka is the most famous theme park in the Kansai region and one of four Universal Studios theme parks worldwide. It was the first Universal Studios-branded theme park to be built in Asia. Opened in March 2001, it is, after Tokyo Disney Resort, the most visited amusement park in Japan. Universal Studios Japan has ten zones: Hollywood, New York City, San Francisco, Minion Park, Jurassic Park, WaterWorld, Amity Village, Universal Wonderland, The Wizarding World of Harry Potter and—new in 2021—Super Nintendo World. There is plenty for visitors to experience: from kid-friendly carousels to thrilling roller coasters and simulations based on popular films like Spiderman, Back to the Future, Terminator 2, and Jurassic Park. In addition, you have many opportunities to take photos with the mascots of popular characters such as Snoopy, Hello Kitty and the Muppets. There are also daily shows and parades that make a big impression, especially at night with beautiful lighting.

Super Nintendo World opened in spring 2021 inside of Universal Studios Japan. This is another of the special areas of USJ and fans of all ages can look forward to various attractions inside this permanent USJ area. To enter the special Super Nintendo World, guests must book a timed ticket slot when they purchase their USJ entrance ticket (like purchasing and booking tickets for The Wizarding World of Harry Potter). The iconic park is a detailed world reminiscent of Mario’s 3D world complete with the little plumber on the goal pole, piranha plants, and goombas!

Namba Yasaka Shrine is a unique and standout destination among Osaka’s sacred spots. Located in the Namba District, Namba Yasaka is famous for its impressive lion head-shaped building called Ema-Den, which measures 12-meters high by 11-meters wide! Ema-Den and the surrounding temple structures are all post-war reconstructions of the original buildings that were destroyed in air raids and fires in 1945. Once you enter the relatively small shrine complex, you will come face-to-face with the fierce Ema-Den. The lion’s eyes, slightly tilted down, seem to stare right at you and its wide mouth reveals pointed teeth. Although the Ema-Den’s appearance is intimidating, its open jaw is meant to swallow evil spirits and leave you with good fortune. Ema-Den becomes even more menacing when the sun goes down and its eyes glow against the night. Why not visit this enormous lion head and let it gobble up your worries? Aside from the lion head, Namba Yasaka Shrine is also a pleasant springtime spot thanks to its numerous cherry blossoms. On the third Sunday of January, Namba Yasaka Shrine becomes home to the Tug-of-War ritual, which is an intangible folk cultural property of Osaka City. The Shinto event is a celebration of the Japanese myth of Susanoo-no-Mikoto who killed the serpent god Yamata-no-orochi and freed people from hardship.